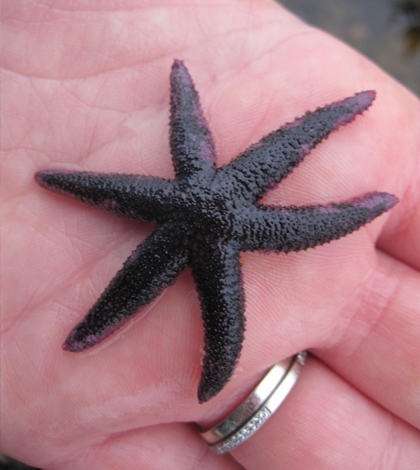 Scientists from the University of California, Davis, investigated a mysterious and sudden invertebrate die-off, revealing clues that could point to long-term changes in tidal ecosystems.

A paper published in PLOS ONE documents their observations made across hundreds of kilometers of rocky Pacific coastline.

The first warning signs came at the end of summer 2011. They weren’t exactly ominous, but still noteworthy, said Laura Jurgens, lead author of the paper and graduate student at UC Davis’ Bodega Marine Laboratory at the time of the study.

“Essentially we’d been observing some discolored water around the lab, which usually indicates some sort of phytoplankton bloom,” Jurgens said.

The situation escalated drastically when, toward the end of August, some of Jurgens’ colleagues stepped into the lab to find thousands of captive marine invertebrates dead in their tanks.

The figures were staggering: Nearly 99 percent of the lab’s purple sea urchins and 100 percent of its six-armed sea stars had shuffled from this mortal coil with little warning or reason.

With locally sourced seawater feeding the tanks, the scientists knew that whatever had killed off the specimens inside would almost certainly have affected any creatures outside on the shore.

Sure enough, the scientists found the coast littered with more of the same invertebrates they’d kept in the labs, along with red abalone and gumboot chitons — mollusks resembling large armored slugs. Dissolved oxygen levels rested within the normal range, and with no storms or heatwaves to shake up the fickle tidal ecosystem, Jurgens said that a bloom of marine plankton called dinoflagellates seemed a likely culprit. Still, pinning down any one cause would be a challenge.

“There’s not really a great way of figuring these things out after the fact unless something is really obvious,” Jurgens said.

The scientists established a study area across 270 kilometers of coastline that Jurgen said is “great for animals,” but less so for humans. Tidal pools, jutting rocks and treacherous cliffs made the area nearly inaccessible, but this habitat was ideal for marine invertebrates, and the researchers would have to do their best to navigate it.

Both of these species are vital members within tide pool ecosystems. The six-armed sea star is an important predator within the tide pool food chain, and urchins are bottom feeders that help recycle decaying matter.

Jurgens says that, while the scientists aren’t certain what caused the die-offs, the event points to a greater need for monitoring among marine populations — especially as a changing climate could incite more frequent extreme weather events. After the die-off, only burrows remained where millions of urchins once resided. (Credit: Laura Jurgens/UC Davis Bodega Marine Laboratory)

“What I can say, is that in this region, we have these really intense winds that push water offshore and pull nutrients into the deep ocean,” Jurgens said, adding that this process can lead to algal blooms.

Harmful algal blooms have been spotted around the world at greater rates than ever, but many of the research surrounding these blooms focuses on fish or farmed marine species. Invertebrates may be less flashy than some other denizens of the sea, but they’re no less important, Jurgens said.

California’s Marine Life Protection Act affords some vital funding for marine population monitoring, but Jurgens says that, in many parts of the country — much less the world — this sort of funding is quite scarce. She noted that the U.S. National Science Foundation made the study possible with their funding, and that the Packard Foundation regularly contributes to monitoring and conservation efforts in California.

“These kinds of things can really go under-reported or under-noticed in marine ecosystems in particular,” Jurgens said. “We need to detect these mass mortalities because they’re among the most extreme consequences of climate change and can have a long-term impact.”