In Medicine Bow National Forest, A Look At Water Movement 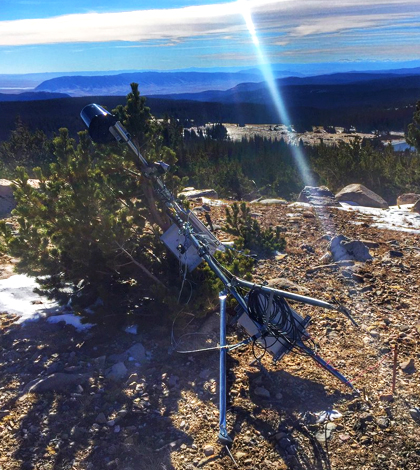 For Daniel Beverly, a doctoral student at the University of Wyoming’s Center for Environmental Hydrology and Geophysics, researching in the mountains has its perks. Like skiing or riding snowmobiles to monitoring sites when it snows. But when there’s not much snow, things are a little different.

It’s pretty much always windy near the top of the mountains in Medicine Bow National Forest. Beverly, along with others from the university who are researching the movement of water through the region’s trees, know this first hand. The gusts at high elevation are so strong that they can blow monitoring stations completely over.

“At one tower right above that, above the snow field, there’s no soil up there,” said Beverly, telling us about one of his stations that encountered heavy winds at around 12,000 feet high. “The wind just ripped it out. Our record (measured by their equipment) is 138 miles per hour. Of course, when the tower was down, we measured 600 meters per second (more than 1,340 mph). That was clearly an instrument malfunction.”

High wind speeds weren’t much of a surprise. But Beverly says that he wasn’t prepared for the sheer kinetic energy that wind can produce on mountaintops.

He and other investigators are essentially trying to document the movement of water from the atmosphere through the trees and then on to the groundwater below. They are also looking to see what insights may be gleaned from the impacts that bark beetles have had on trees there.

“Our major objective is to quantify the transpiration and evaporation occurring through different ecosystem types,” said Beverly. “Almost all have been impacted by bark beetles and we’re trying to determine how they’ve changed. … If we can establish how bark beetles have impacted the area, along with climate change impacts, we might be able to estimate available water downstream.”

To get there, Beverly and others are using seven monitoring sites throughout the forest equipped with sensors that can gauge solar radiation, vertical wind speed, precipitation, temperature and other parameters. There are also sensors deployed for tracking changes in snowpack, radiation as it comes in and goes out, and soil heat flux. Many of the trees are equipped with sap-flow sensors.

“Sap flow is one of the methods we use to get a transpiration rate, which is separate from evapotranspiration,” said Beverly, “so that we can partition water use in the plants from the total ecosystem.”

Beverly says a flux tower downhill, sitting at elevation in the forest, is also helping to capture carbon and water flux. The team is likewise relying on images from NASA MODIS and Landsat satellites to look at changes in vegetation. And there’s talk of soon deploying a drone for data collection from the sky.

Data from the flux tower are being compared to measurements from another in Fort Collins, Colo., managed by the Glacier Lakes Ecosystem Experiments Site (GLEES). It has been around since the 1990s, whereas the one in Medicine Bow National Forest began collecting data around 2014.

Bringing all that data together so far, Beverly does have a few insights to share.

“We’re observing the same thing that’s been observed in Colorado. There’s not any actual increase of discharge post bark beetle,” said Beverly. “But unfortunately we didn’t have any sites up before the bark beetle outbreak, so we can’t argue how land and water use has changed. But we are seeing different levels of transpiration as elevation increases.”

A lot of that is because there are different species of trees that dominate at different elevations. As you move up the mountains, there’s a transition, he says. Still, there isn’t a huge contrast in water use between the two zones.

“Trees aren’t as stressed in high-elevation conditions, but the growing season is so much shorter that the total water use is not that different,” said Beverly.

Plans are to continue the effort for several years to come. All data, along with measurements to be taken in the future, are remotely telemetered and posted on the Center for Environmental Hydrology and Geophysics’ Data Discovery Tool online.

Beverly’s advisor in the work is Brent Ewers, professor and director of Wyoming EPSCoR. Funding is being provided by National Science Foundation Grant EPS #1208909.