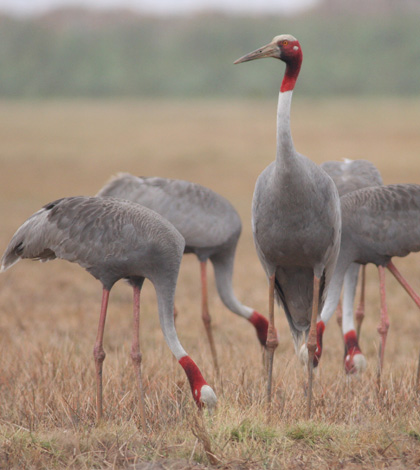 Sarus cranes in Tram Chim National Park, Vietnam, one of the hotspots identified by the study (Credit: International Crane Foundation)

The Mekong River Basin, historically a wellspring of life and trade for Southeast Asia, is wracked by concentrations of contamination that threaten humans and wildlife. A new U.S. Geological Survey study identifies the sources of the pollution, providing the region’s governments with information that could lead to restorative action.

Leading the study were members of the USGS, the International Crane Foundation and the University Network for Wetland Research and Training in the Mekong Region. Eight of the network’s 18 universities collaborated for the study, and sent teams to explore the Mekong’s wetlands over the course of a year.

“It was a really fast turnaround,” said Jeb Barzen, director of field ecology at the International Crane Foundation. “We were sampling wetlands on a scale that was unprecedented.”

The study looked at pollution hot spots throughout the basin, many of which were located near agricultural operations and seemed to be caused by pesticides and herbicides. Some of the hotspots were found in areas under environmental protection.

“The hotspots are important because they can give you a place to start when looking at how the impact goes up the foodchain,” Barzen said. “In Southeast Asia, more than North America, fish are a very important part of the diet… Many of the fish people are consuming are migratory, so effectively they might enlarge the hot spots.“

Scott Wilson, a branch chief at the USGS, explained how pollutants consumed at lower levels of the food chain can harm humans.

“Because these things tend to bioaccumulate, they can affect everyone on the food chain — including humans,” Wilson said. “They can be passed through breast milk… and have some pretty nasty effects.”

A training workshop for the study (Credit: International Crane Foundation)

Tran Triet, director of the International Crane Foundation’s Southeast Asia program, said that spectrometer analysis of 21 different organic pollutants was performed at labs in the Mekong region. All of the pollutants, including 18 isomers of polychlorinated biphenyls, are restricted under the Stockholm Convention on Persistent Organic Pollutants.

During the yearlong collection process, the teams gathered 530 samples from 450 wetlands. Another year was spent writing the study, and then a third spent navigating the peer review process. These feats, Barzen said, would have been impossible without the cooperation of all the involved entities.

About 100 researchers worked on the study. Triet said that the study provided a great opportunity for the region’s scientists to learn from USGS researchers in the field.

Barzen suggested that both parties can learn from one another.

“Southeast Asia and the U.S. are not known for great collaboration,” Barzen said. “This is an example where Southeast Asia can teach the rest of the world. They can actually demonstrate how cooperation can be done, and just what can be accomplished when you cooperate to that extent.”

Providing an example of an obstacle the study was able to overcome, Wilson said, “These wetlands were in parts of the country that were not very accessible — even for the locals within that country.”

The study was funded by the Lower Mekong Initiative, a program started by Hillary Clinton.

“As a citizen of a country in the region, I think its a very good investment from the government of the United States,” Triet said. “It’s resulted in a very good scientific project.”

The next step for the research will involve a more careful examination of the hotspots, but Barzen said countries in the Mekong region need to consider funding new efforts.

“It’s important for individual countries to do some more intensive surveys in the hotspot areas,” Barzen said. “There’s now a capacity to do this research — if there is funding.”