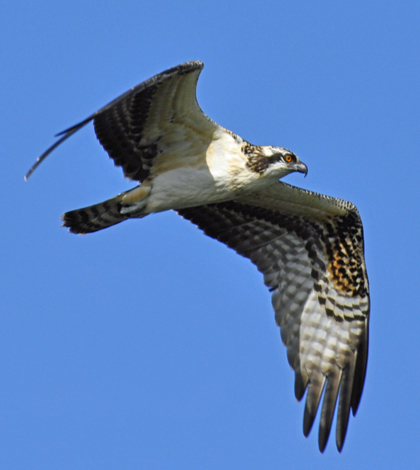 An osprey in flight in Oxford, Michigan. (Credit: Rodney Campbell, via Flickr)

Like the bald eagle, peregrine falcon and California condor, the osprey was pushed to the brink of extinction in the mid-20th century due in part to the rising use of DDT as an insecticide. A ban on the toxic substance in the 1970s has resulted in the restoration of many bird of prey populations, giving scientists a second chance to study the creatures and learn how to best protect them.

Southeast Michigan is known as a nesting ground for osprey, so the state’s Department of Natural Resources is outfitting six osprey chicks with special tracking “backpacks” that will allow researchers to follow the endangered birds’ migration patterns.

“Ospreys are fascinating birds — so much fun to watch,” said Holly Vaughn, a wildlife outreach technician at the Michigan Department of Natural Resources. It’s her job to conduct osprey education programs for young and old alike.

Otherwise known as the sea hawk, the osprey is a raptor that mates for life and dines almost exclusively on fish. Keen vision, sharp talons and an impressive ability to plunge to its prey from over 100 feet in the air make the osprey a formidable predator. So formidable, in fact, that they usually find and kill their next meal within 12 minutes of the start of a hunt, Vaughn said.

Each backpack unit contains GSM and satellite telemetry devices. In addition to observing the birds’ migration, which will begin in September, the researchers will also study their daily movements. Anyone with an internet connection can track the ospreys’ progress with timed and dated GPS coordinates at the Michigan osprey webpage.

“Each osprey seems to take their own special route,” Vaughn said. “Some fly straight down I-75, some follow river corridors and then fish along the Gulf Coast before heading further south.” A similar study in 2013 affixed the backpacks onto three osprey chicks, but all three died that same year. This, Vaughn said, is not an uncommon phenomenon.

“Survival rates of young ospreys are very low — about 60 to 70 percent of young osprey die in their first year,” Vaughn said. Regarding the ospreys tagged in 2013, she noted, “One probably died from predation in Columbia, one was probably shot in Cuba, and one was injured in Florida and died in captivity.” The tagged ospreys’ paths as of Aug. 24 (Credit: michiganosprey.org)

While the tracking project primarily aims to give conservationists and researchers insight into young osprey travel patterns, it also helps spread awareness about the birds among the general public. And informed citizens help the DNR keep an eye on osprey nesting and movement habits.

“We have a very dedicated group of volunteers that help us monitor the ospreys in southeast Michigan,” Vaughn said. “Many are photographers and we affectionately call them the ‘osprey paparazzi.’ They follow us to these bandings and backpack outfittings and are great partners in osprey conservation!”

Partners in Illinois and Ohio are helping the Michigan DNR conduct the osprey study, Vaughn said. Anyone who spots a nesting pair of ospreys in southeast Michigan should contact the Osprey Watch of Southeast Michigan. Nesting pairs found in other states should be reported the local DNR.