As Microplastics Invade Every Ecosystem, More Research and Action Needed 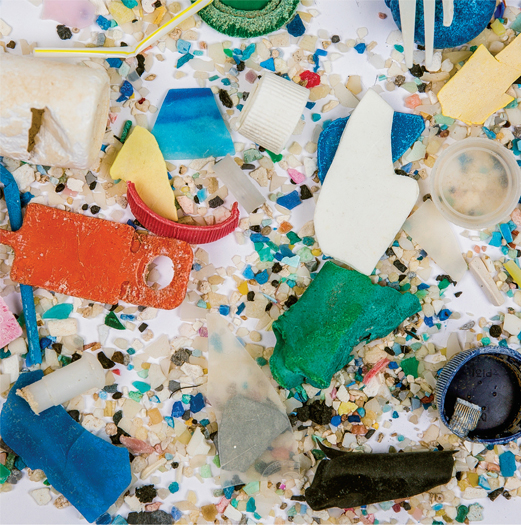 Top image: Plastic fragments, including microplastics, are now ubiquitous on land, in freshwaters, and in the ocean. Credit: Florida Sea Grant/Flickr/CC BY-NC-ND, http://science.sciencemag.org/content/360/6384/28.full.

In recent months, what is a truly monumental overuse of plastic has become more and more apparent in numerous ways. In 2017, we learned that microplastics had been found on every single beach scientists tested for them. Just a few months ago, researchers revealed that the “Great Pacific Garbage Patch,” which is three times the size of France, contains up to 16 times more plastic than we previously thought.

Now, recent writing from Chelsea M. Rochman of the University of Toronto’s Department of Ecology and Evolutionary Biology indicates that we may just be scratching the surface of our microplastic problem here on Earth. Rochman corresponded with EM about her work.

It’s fitting to begin a discussion on microplastics with a mention of the Great Pacific Garbage Patch; this was in part what inspired the research into microplastics for many in the field, including Rochman.

“I have been interested in waste since I was a kid, but I became interested in plastic specifically when I visited Australia on study abroad as an undergraduate,” details Rochman. “I saw so much plastic washed up on remote island beaches and sea turtles in rehab facilities that had bellies full of plastic debris. This led me to begin researching what we knew about plastic pollution, and I came across writings about the Garbage Patch. Ever curious and taken aback, I decided to make a career out of it.”

In 2004, marine ecologist Richard Thompson led a team conducting a pioneering study on plastics, deeming small plastic particles “microplastics” to distinguish them from bigger pieces of plastic debris such as bags, bottles, and fishing nets. This early work started a trend, which was mostly focused on microplastics in oceans. As a result, scientists have begun to turn their scrutiny of microplastics toward terrestrial and freshwater systems. 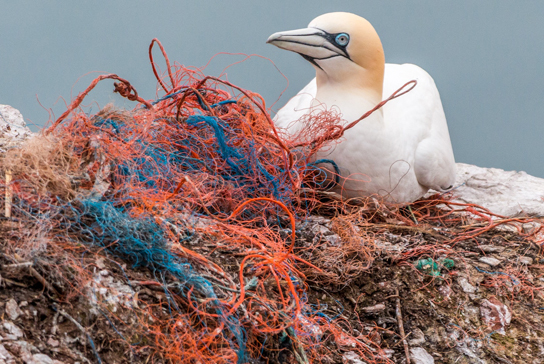 “I think this is because this issue started with others also hearing about the garbage patches,” explains Rochman. “That started a trend of marine scientists working on the issue. It simply took a bit longer before trends switched to encompass freshwater and terrestrial. I do not think it has anything to do with the importance of the issue in either place, but simply the trends in the media and research.”

Given that the world’s oceans are the biggest sink for microplastics, they were a great starting point. However, Rochman estimates that 80 percent of oceanic microplastic pollution originates on land, and rivers are among the primary routes microplastics travel to reach the oceans. Furthermore, it’s now clear that microplastics are a kind of persistent pollutant, difficult to remove and distributed around the world.

Disturbingly, although we know that microplastics have contaminated various freshwater species, including birds, clams, fish, insects, and worms, we really don’t know much about what the practical effects of this contamination are. Rochman points out that we do know microplastics can have toxic effects in some freshwater plants, invertebrates, and several species of fish—and perhaps in predators that consume them, including us.

It also remains unclear what additional effects microplastics might have on larger ecosystems. For example, microplastics in agricultural soils, dust, and groundwater may well have serious impacts. Rochman remarks that microplastics may travel via atmospheric deposition and soil, possibly causing far-reaching effects.

So, what effect will knowing more about microplastics have? Potentially, a healthier attitude about producing them in the first place.

“There are many solutions, we just aren’t implementing all of them,” remarks Rochman. “They range from new waste management infrastructure, human behavior, reducing the use of plastic—particularly for single-use items, building toward a more circular economy, putting filters on washing machines, et cetera.” 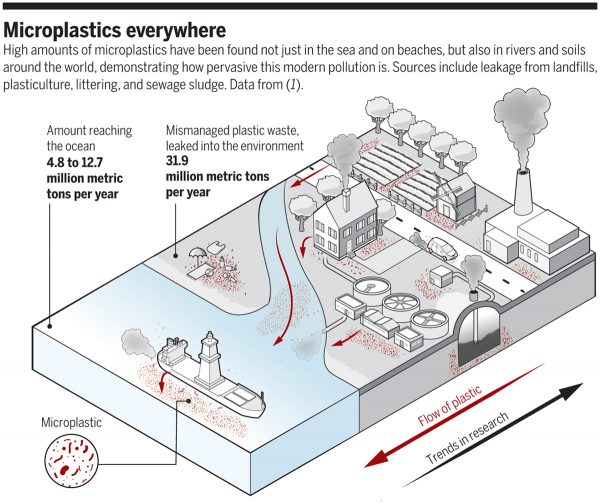 High amounts of microplastics have been found not just in the sea and on beaches, but also in rivers and soils around the world, demonstrating how pervasive this modern pollution is. Sources include leakage from landfills, plasticulture, littering, and sewage sludge. (Credit: N. Desai, Science, http://science.sciencemag.org/content/360/6384/28/tab-figures-data.)

The bottom line for Rochman is that microplastic research must have a global focus, and should promote a better understanding of the effects of microplastic pollution in every ecosystem, at every stage. Researchers working on microplastics in new areas can build on existing microplastics research from marine ecosystems, applying well-developed techniques for extracting, sampling, and quantifying microplastics.

“Scientific research in this field is growing every day and studies are increasingly coming out in freshwater and terrestrial systems as well,” adds Rochman.

Of course, this is not to say that there won’t be aspects of microplastics research in new ecosystems that aren’t unique. And if we discover that microplastics are toxic wherever they come to rest on our planet? We’re not helpless; there are remediation strategies that work, Rochman points out.

“For example, microbeads were recently banned in facewash, bodywash and toothpaste,” states Rochman. “Filters can be put on washing machines to trap fibers from coming out of the wash.”

In the meantime, as more research on microplastics emerges, the scientific community can do what it does best, and provide a nuanced look at the problem, from any angle that presents itself.