How Midwater Crustaceans Vanish From Predators 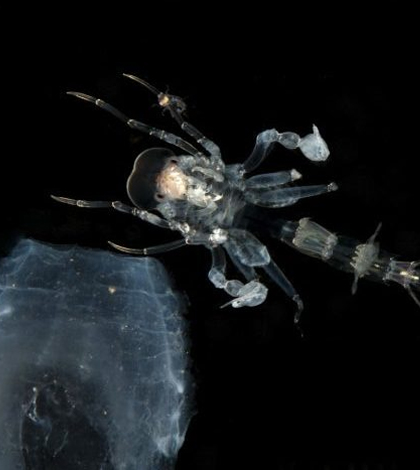 Phronima is a crustacean that lives in the twilight zone of the ocean, where there is nowhere to hide from predators. (Credit: Laura Bagge / Duke University)

Midwater crustaceans that live in open ocean water don’t have a lot of places where they can hide. But luckily, these creatures can defend themselves by simply disappearing.

Over time, according to scientists at Duke University and the Smithsonian Institution, some midwater crustaceans have developed anti-reflective coatings that make it harder for predators to spot them. The hyperiid amphipods that researchers considered are capable of dampening light reflection by more than 250 times in some cases.

More oddly, these anti-reflective coatings that the crustaceans deploy for self defense may not have been generated by the creatures themselves. Investigators using electron scanning microscopes saw that the optical coating appears to be a set of uniform beads that are smaller than the wavelength of light.

There is no word yet on what the beads are, but scientists say that they have some features of bacteria. They are incredibly small, around 50 to 300 nanometers in diameter, and sometimes connect to one another using filaments. If the anti-reflective coating is alive, investigators will have to then segment how the symbiotic relationship got started in the first place.

Full results of the investigation are published in the journal Current Biology.

Top image: Phronima is a crustacean that lives in the twilight zone of the ocean, where there is nowhere to hide from predators. (Credit: Laura Bagge / Duke University)