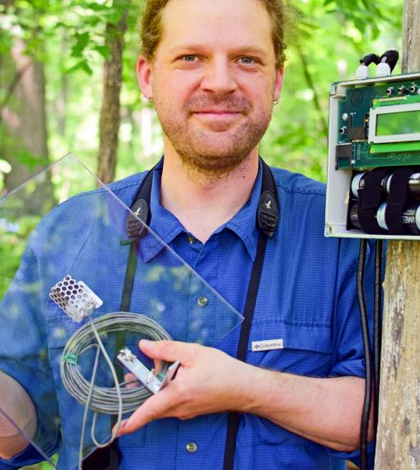 Studies have already shown that lights on tall buildings, like skyscrapers, and towers can impact the flights of migrating birds. But what about the lights that we all interact with each day, like street lamps or porch lights?

According to new research led by scientists at the University of Windsor, these small and seemingly innocuous sources of light can also negatively impact bird flight patterns. It is the first study to reveal that these low light sources can still affect the behaviors of birds migrating overhead.

To make the find, scientists relied on microphones that they deployed during the night in 16 locations in southern Ontario. Some were dark areas, with no lights nearby, while others were light areas that had some source of artificial light pulsing through them. But all sites were in areas with little noise, such as low-density residential communities or parks, so that their recordings wouldn’t be tainted by too much external noise besides bird calls.

Throughout the 2013 fall migration period they were monitoring, researchers recorded 352 hours of bird sounds. More than 1,900 bird calls were recorded, including 15 that were deemed to be from unique bird species.

After analyzing all of the recordings, the numbers showed that a median of 31 calls were recorded at lighted sites whereas the same figure for dark sites came in at just 10.5 calls.

Researchers say that the results clearly point to a conclusion that there are more calls above sites impacted by light than the dark areas. But it is still unclear, and hard to prove, that light is causing birds to change their migration patterns.

It may be that birds are changing their flights to go over lit sites, or it could be that they’re more easy to hear over lighted sites because the birds are possibly flying lower. Another simple explanation is that birds just get a little disoriented as they fly around lighted areas.

But since there are clearly some effects from low light sources on migration patterns, researchers believe that the lights could at least be causing birds to fly more inefficiently. That, over the course of a long migration, could reduce the likelihood that all the birds will make the trip.

U. of Windsor scientists hope that their findings can one day inform conservation efforts to help birds. If more people just understand that light is disruptive to birds’ movements, then one conservation step could be simply flicking off an outdoor light.

Full results of the investigation are published in the journal The Condor: Ornithological Applications.