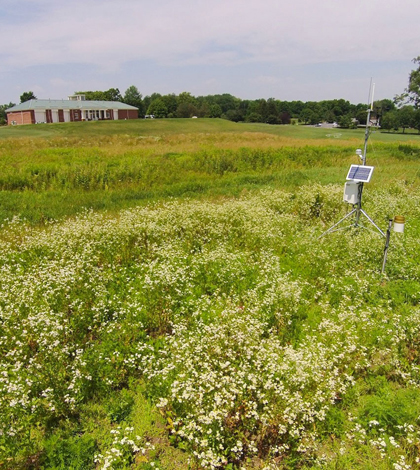 A weather station near Miller Run is an important part of the new monitoring system (Credit: Bucknell University)

From its beginnings near a golf course, Miller Run flows through the campus of Bucknell University via underground pipes and a concrete channel lined with riprap. It empties into Limestone Run, a tributary to the much larger Susquehanna River.

Along its passage, Miller Run doesn’t get much attention. And though the slender, brown stream isn’t much to look at, a grant from the Pennsylvania Department of Environmental Protection has brought new monitoring equipment to study its hydrology. Those managing the project plan to use the data collected in restoration work set to begin on Miller Run, as well as in computer science projects to create data visualizations and models.

Since the project began, Miller Run has been outfitted with a weather station and three stream gauges that measure its depth, temperature and pH, as well as dissolved oxygen levels. Data are then transmitted via cellular telemetry back to researchers. They add to a record that spans the whole Susquehanna River, as Bucknell already manages the largest monitoring network there.

Marchiori and Gilbert Kim, a research intern, will put together a database to integrate sensors from stations on Miller Run and those deployed on the Susquehanna River. They aim to make the tool flexible enough that new sensors can be added seamlessly. If they can streamline their approach to managing the network in this way, the hope is that other investigators can copy it.

“The idea is that as we reduce the cost, we can crowdsource data from other universities, agencies and watershed groups who install a similar network,” said Ben Hayes, director of the watershed sciences and engineering program, in a release.

Hayes notes that the Pennsylvania DEP is pretty excited about the project because low-cost monitoring networks with advanced capabilities are especially needed nowadays. “We envision a day when DEP can say, ‘As part of this stream restoration grant, we want you to install a wireless network of instruments like Bucknell did on Miller Run,” said Hayes.