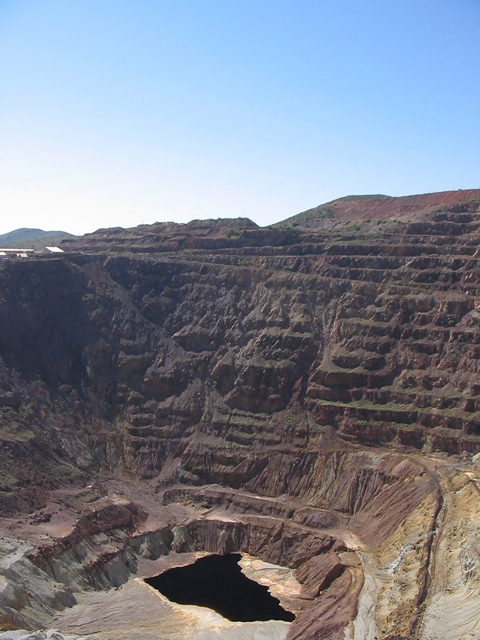 The Lavender Pit, an open pit copper mine, in Bisbee, Arizona. (Credit: By The original uploader was Cornellrockey at English Wikipedia. (Transferred from en.wikipedia to Commons.) [CC BY-SA 2.5 (https://creativecommons.org/licenses/by-sa/2.5)], via Wikimedia Commons)

For the past decade or so, Dr. Bernard Laval, a civil engineer with the University of BC in Canada, has been researching Quesnel Lake, a large, deep lake with unusual water dynamics. This allowed him an unusually high level of insight into much of what makes the lake tick—and when Mount Polley Mine (MPM) experienced a breach in 2014, causing materials to be deposited into Quesnel Lake, he already had a sense of what the lake’s waters looked like.

“Our work was inspired by a desire to improve holistic understanding of lake function to help with fisheries management by BC Ministry of Environment (BC MOE) and Fisheries and Ocean Canada (DFO),” explains Dr. Laval. “I was invited to join by Eddy Carmack, a recently retired DFO scientist with a passion for lakes—he formerly worked for Environment Canada when they had a western lakes division. He was intrigued by this large, deep lake whose outflow, the Quesnel River, had large temperature fluctuations (several degrees over days) during summer. This observation was the toe-hold that started the study into how the lake functions as a whole.”

Although Quesnel Lake had been monitored for decades due to its high fisheries value, scientists have historically only studied the top portions of the lake where sunlight penetrates the water. This is because most of the lake’s life is within this region of the water.

“Standard sampling only went down to 75m depth,” comments Dr. Laval. “Eddy [Carmack] first had the lake re-surveyed, since old survey equipment only went down to 150m, and most lake maps are still based on these old surveys. They found it is over 500m deep, making it the second deepest lake in Canada. So very little was known about much of this lake.”

Dr. Laval and the others went to work. By 2008, Laval published the first new paper on the lake.

“The 2008 paper showed that the temperature variations in the Quesnel River are related to motions in the lake set up by wind friction on the lake surface moving water,” details Dr. Laval. “Essentially the warm water at the lake surface is dragged downwind, which happens to be away from the outlet to the Quesnel River, and cold water comes up at the upwind end, which introduces colder water into the river.”

The team continued with their research, and by 2012 they had deciphered many of the circulatory patterns within the lake.

“The 2012 paper tells the story of whole lake circulation, or how water in different regions of the lake interact with each other,” Dr. Laval describes. “Part of that is showing where river water goes when it enters the lake. Another part of that is describing seasonal mixing from top to bottom within the lake, which is how nutrients are recycled from the deep water back to the surface where they are available for the “life” the fisheries scientists are focused on. Because of Quesnel Lake’s great depth and resulting high pressures, 50 atmospheres at the bottom, this vertical cycling of water is somewhat exotic and not what you find in your lake textbooks.”

The mine waste breach

This past March, Dr. Laval presented recent findings about Quesnel Lake’s progress since the breach. The presentation revealed that the lake’s ecosystem has slowly been flushing deposited materials out over time.

The 2014 breach released mine waste, which is the mined rock without the extracted metals. Miners crush the ore into a “rock flour” to extract the metals, leaving tailings that were stored in water behind a dam.

“When the MPM tailings dam failed, water and tailings were released into nearby Polley Lake, and they then flowed 8km down Hazeltine Creek to Quesnel Lake,” states Dr. Laval. “What entered Quesnel Lake was a mixture of water, tailings, and both the forest and forest floor scoured by the debris flow.”

The elements of this mixture did different things upon entering the lake. 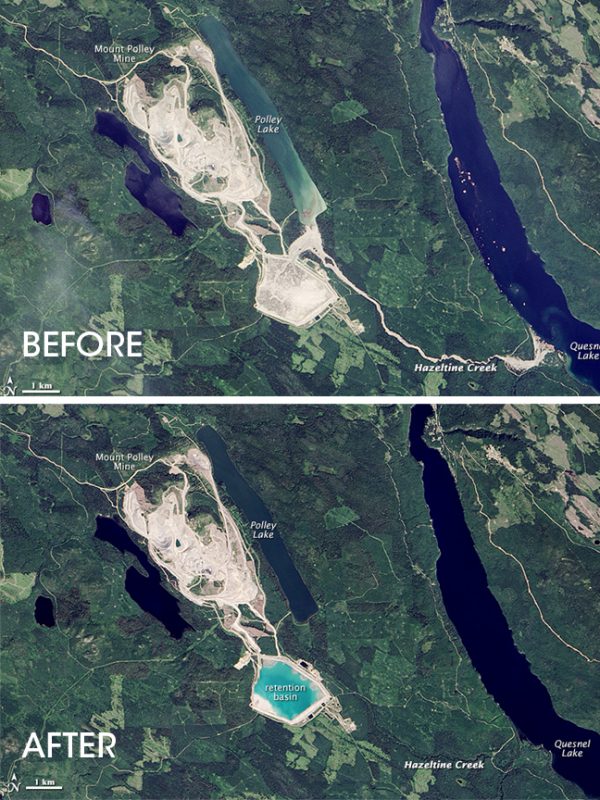 “The trees floated, the larger particles went to the bottom as a slurry, and a bunch of very small particles (~1 micron) ended up suspended in the lake throughout the deep water of the West Basin (the lake has two basins),” explains Dr. Laval. “The West Basin is the smaller basin to the west of Cariboo Island, from which the Quesnel River flows. This basin is about 100m deep. The material that entered due to the breach raised the lakebed 5 to 10 meters in the West Basin.”

The most dramatic changes to the lake came within four months of the breach. Now, Dr. Laval reports, materials have settled to the bottom of the lake and are slowly being flushed out.

“The material initially suspended in the water column slowly settled to the bottom, the largest particles fastest, so that turbidity decreased, until the annual vertical mixing event mixed deep with surface waters and the Western Basin and Quesnel River turned green as a result,” states Dr. Laval. “This all flushed out during spring freshet. Since then, every Fall we have observed turbidity increasing in the deep waters of the West Basin of Quesnel Lake, which is flushed during the subsequent freshet. A hypothesis we are testing is, is this annual increase of turbidity due to settled particles being resuspended from the lakebed? If this is true, which is still to be determined, then the next question to answer is how much of the 5 to 10 meters of material on the bottom is suspendable?”

While the fluid dynamics of this lake are unusual, not everything about the mining breach story hinges upon those differences. For example, the mechanics of deep water renewal from 500 meters are unusual, but Dr. Laval points out that they don’t really figure into the Mt. Polley spill story. However, other strange traits of Quesnel Lake appear to be playing into how the recovery from the breach proceeds.

“The large temperature variations in the Quesnel River due to wind-induced lake motions are also unusual,” remarks Dr. Laval. “Wind does this to all lakes, but you don’t usually see deep water coming to the surface in summer when the temperature difference between surface and deep waters is greatest and the largest buoyancy difference exists; mechanically the wind has to impose a large enough friction force to overcome the gravitational effects on buoyancy.”

Dr. Laval explains that this plays into the Mt. Polley story because those same wind-induced motions move water between the West Basin and the main basin of Quesnel Lake. Other remaining questions center upon how much of the spill material is moving westward across the constriction separating the two basins, and what the long-term impacts of this material to the larger portion of the lake might be.

Top image: The Lavender Pit, an open pit copper mine, in Bisbee, Arizona. (Credit: By The original uploader was Cornellrockey at English Wikipedia. (Transferred from en.wikipedia to Commons.) [CC BY-SA 2.5 (https://creativecommons.org/licenses/by-sa/2.5)], via Wikimedia Commons)