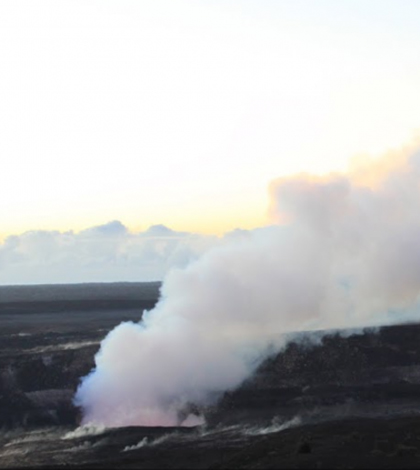 “Vog” is a word that few know and use. But for people living near Hawaii’s Kīlauea, it’s the perfect mashup to describe what they deal with everyday: volcanic smog.

Much of the vog that comes out of the volcano is comprised of sulfur dioxide, a compound toxic to humans and plants. It can react with components in the atmosphere to form sulfuric acid, a common component of acid rain. Particulate matter, water and carbon dioxide also float out of Kīlauea.

Scientists already know that some of those emissions are toxic. They look to study the volcano’s eruption because it is unique. Kīlauea has been erupting non-stop since 1983.

In a recent investigation conducted by students at the Massachusetts Institute of Technology, sulfur dioxide monitors and other sensors were used to characterize the plumes coming out of one of the volcano’s newest craters. Results of the investigation have helped scientists learn more about the world’s longest-running volcanic eruption and shine new light on the effects its emissions have on those living nearby.

The investigation was carried out by students in MIT’s Traveling Research Environmental eXperience program that involves a trip each year to give students experience in environmental field work. “Field work is a part of environmental science and engineering, but it’s not a big part of the curriculum,” said Jesse Kroll, associate professor in the Department of Civil and Environmental Engineering at MIT. “Students get experience with modeling and lab work, but often not with going out in the field. TREX was set up to give students a chance to explore that side.”

For the past three years, the trip has let students study Kīlauea’s emissions. In 2012, students set out to figure out how best to collect vog data. The following year, they carried out real-time measurements of the chemicals belching out of the volcano. For the 2014 field work, students set up monitoring equipment near Halemaumau crater, a newly opened vent on Kīlauea.

The crater sits in a large summit caldera and has been identified as the main source for gases coming out of the volcano. With its location in Volcano National Park, Kroll says officials had to close park areas and paths to keep tourists and others safe after it opened. For those living on the island, the impacts of emissions on air quality are concerning too.

“There’s lots of concern on increases in asthma, and there has been some anecdotal evidence of it,” said Kroll. “People move to different parts of the island as a result.” Kroll says he has had watery eyes and felt his lungs burning near Kīlauea, effects which he believes are a result of the emissions. Students test out air monitoring equipment in a kitchen before deployment near Kīlauea. (Credit: Eben Cross, Massachusetts Institute of Technology)

Quality science can depend on anecdotes for clues to an issue, but not as a basis for conclusions. So to get the hard data they needed, Kroll and his students outfitted Kīlauea with sulfur dioxide monitors and aerosol chemical speciation monitors. The sulfur dioxide monitors are fairly common in such applications and work through diodes that emit ultraviolet light. The aerosol monitors are not, and can collect information on the mass of particulates in the air, as well as their chemical compositions.

“PM 2.5 (fine particulates) could be from dust, fires, seaspray or the volcano,” said Kroll. “By measuring the composition of the particles, we can say for sure what they are downwind of the volcano.”

The main component of the emissions they studied was confirmed to be sulfur dioxide, and Kroll says their levels near the volcano are far higher than those of any polluted U.S. city, which have far lower figures thanks to emissions controls. Researchers also found small amounts of ammonia that helped neutralize some of the sulfuric acid formation. There was not enough to fully cancel it out, but its presence resulted in levels of ammonium sulfate in the air.

“We used the data to get a sense of how fast the chemical conversion was occurring. Each has health impacts,” said Kroll. “If we can understand how fast the conversions can occur, these measurements can be used to get a better sense of pollutants that people are exposed to.”

The chemical changes in the air are different as you move away from the volcano. The emissions, Kroll says, are more concentrated near the volcano and less concentrated downwind. The differences make for interesting air quality on the opposite side of the island where residents feel that the vog levels are worse.

“They see less SO2,” said Kroll. “But they may see more particulate matter, or vog, because there’s more time for conversion.”