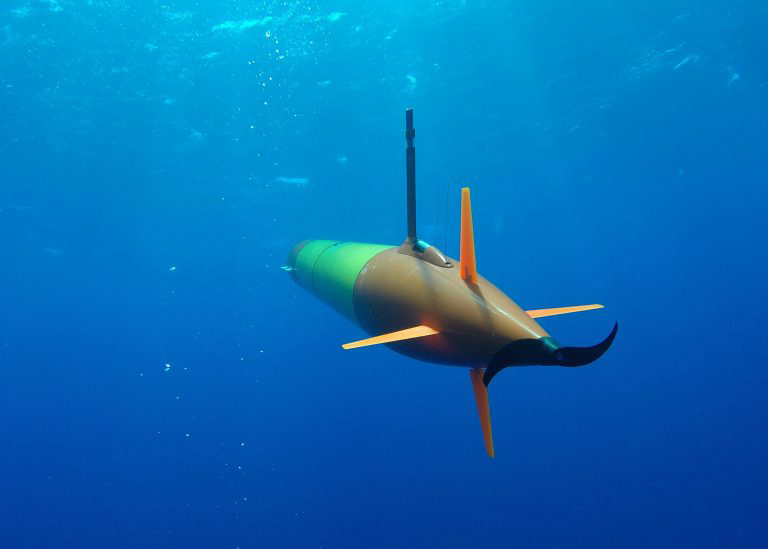 In March and April of 2018, researchers from the University of Hawai’i at Mānoa (UH Mānoa) and the Monterey Bay Aquarium Research Institute (MBARI) deployed a small fleet of long-range autonomous underwater vehicles (LRAUVs) in the waters of the Pacific near Hawaii. These LRAUVs automatically collect and archive samples of seawater, enabling scientists to study and track ocean microbes with a level of detail that is unprecedented.

The team who undertook the expedition on the research vessel Falkor was hoping to survey and track Mesoscale eddies within the North Pacific Subtropical Gyre (NPSG) using a suite of oceanographic instruments. Eddies give oceans their swirling, circular motion, as they move against the main water currents of the ecosystem as a whole. Mesoscale eddies have diameters between 100 and 200 kilometers, making these closed circulation fields medium-sized systems.

Tracking and understanding how oceanic layers mix vertically within and define water columns is important for several reasons. Each layer in a water column from the Epipelagic eddies near the surface down through the Mesopelagic, Bathypelagic, and Abyssopelagic currents, lowest in the column, exhibits unique physical characteristics. How water moves in patterns between these habitats, which are otherwise separate, impacts the ecosystem’s biological structure and productivity.

The team tested three seawater-sampling LRAUVs that operate in tandem with a SeaGlider, a Wave Walker, a Wire Walkers, and other robotic platforms.

“The University of Hawaii took delivery of three LR-AUVs from MBARI in mid-February just ahead of the Falkor expedition,” explains oceanography professor David Karl of the UH Mānoa School of Ocean and Earth Science and Technology (SOEST). “We had planned to deploy all three. Two of them were equipped with samplers to collect DNA from marine microbes and return those samples to ship after the mission. During the initial deployment of one vehicle, it was damaged beyond use, so the expedition used just two. All subsequent deployments and recoveries were successful.”

The Falkor expedition was one-month long, and that time was divided into two, two-week long legs. The first leg was for testing the vehicles since they had never previously been deployed in the open ocean from a large research vessel. 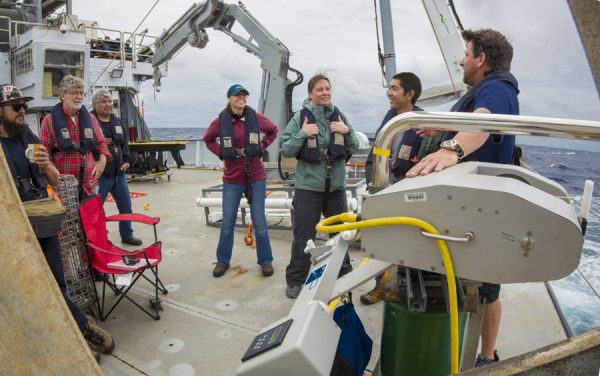 The research team stands on the deck of the Falkor. (Credit: Image courtesy of Elisha Wood-Charlson, University of Hawaii, https://schmidtocean.org/collection/eddy-exploration-ecosystem-dynamics/)

“Since the initial tests were so successful, after one day the cruise went to the large cyclonic eddy north of Maui to begin our sampling efforts, both from the LR-AUVs as well as from other instruments including the waveglider, seagliders (2), wirewalkers (all three of these are also remotely operated, robotic instruments), and conventional water sampling using our CTD-rosette system,” details Dr. Kay. “The latter provided water from different depths for scientists aboard to conduct a broad range of experiments.”

Eddy systems allow for the interchange of water masses within a vertical range of as much as 100 meters, exchanging seawater between upper to lower layers in the column. Because each layer has its own biological, chemical, and physical characteristics, this interplay can produce changes in how an ecosystem is structured, both acute and long-term. For example, at 150 meters below sea level there is a notable increase in nutrient levels, but light decreases exponentially as depth increases. This means that the vertical interchange of water masses can affect photosynthetic organisms profoundly, along with all species that rely on them.

The team used the LRAUVs to characterize the eddy system first. The units collect samples and provide data about water chemistry, temperature, and chlorophyll, a sign of microscopic algae, as they move along.

“They can be programmed to do other tasks and operations as well, and to collect other types of samples,” adds Dr. Karl. “They also have a suite of sensors that collect environmental data like temperature, O2, salinity, light, particles (via light scattering) and plant biomass (chlorophyll) via fluorescence. Other sensors and sensor packages can be added.”

The LRAUVs also transmit this data—in this case to scientists aboard the Falkor.

“The LR-AUVs can travel 1000 kilometers (about 600 miles) per mission,” details Dr. Karl. “That could be 600 miles in a straight direction, 100 miles of going up and down in the water column (remember the ocean is 3-dimensional and we are interested in mapping the upper 250-300 meters of the water column) or any combination. If you send them out from shore, you need to make sure they have energy in the battery remaining to get home. If you deploy from a ship, as we did in this expedition, we could always go and pick them up if they ran low on energy.”

The ability to transmit beyond 600 miles and detect important oceanographic events means that these LRAUVs will empower the reach of scientists studying the ocean into far more remote areas. They will also allow teams to sample and study oceanographic features and events they detect with remote satellite imaging—even if they cannot access a research vessel.

The LRAUVs also house integrated Environmental Sample Processors (ESPs), miniature robotic “labs” that collect seawater samples and preserve them at sea. This captures a snapshot of the proteins and genetic material of any organisms in the area.

“The LR-AUVs filter seawater and concentrate the microbes contained therein,” remarks Dr. Karl. “Then a preservative called RNA-later is added. This preserves the RNA and DNA in the cells for analysis back at our shore-based labs.” 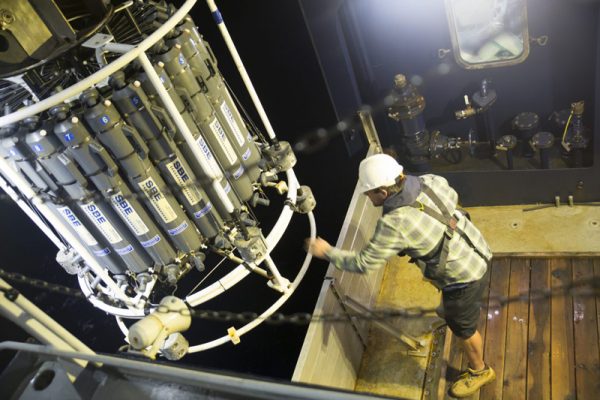 Preparing to deploy one of the vehicles. (Credit: Image courtesy of Elisha Wood-Charlson, University of Hawaii, https://schmidtocean.org/collection/eddy-exploration-ecosystem-dynamics/)

Mapping out eddies, digging into microbes

After the characterization stage, the team used the LRAUVs to perform high-resolution mapping of deeper waters where photosynthesis is just barely possible. This mapping and the associated samples from the mapping phase will help researchers understand how eddies influence marine ecosystems, and allow them to improve models of the ocean.

Ocean microbes form the base of all marine food webs, and they also produce at least half of all oxygen in Earth’s atmosphere. They play a vitally important role—but they’re not a monolithic group, and require careful study.

“Different microbes do different things in the sea,” states Dr. Karl. “Some make O2, those that photosynthesize, and most consume O2. The hallmark of microbial life in the sea is the enormous diversity in form, function, genome and metabolism. This is what we study in the Simons Collaboration on Ocean Processes and Ecology (SCOPE) program.”

The LRAUVs have by now all been recovered, after locating and pursuing eddies for some weeks. Now that the LRAUVs are back in the lab, the team can extract DNA from their filters. This can tell them more about how long eddies last, how stable they are, and how they influence ocean systems. The team will use this data to improve current ocean models and, by extension, the predictions of ocean health in the future that are based on them.

“This expedition, a collaboration between the Simons Collaboration for Ocean Processes and Ecology, the Monterey Bay Aquarium Research Institute, and the Schmidt Ocean Institute, brought together engineers, scientists, and marine technicians each with their own specialized skills and expertise,” adds Dr. Kay. “In the end, the whole was much greater than the sum of the parts. Science is a team sport, and the Falkor expedition participants were the best team ever assembled.”

Although these LR-AUVs may never replace the larger research vessel, they will enable research scientists to learn more about the oceans that blanket so much of our world.

“This successful test of the LR-AUVs have proven their ability to get the job done,” remarks Dr. Kay. “The next step will be to send them out from the north shore of Oahu to sample the ocean when we are unable to be there ourselves. This will nicely complement the ship-based research that we have been conducting at or near Station ALOHA for the past 30 years.”