Monitoring for Answers in Southern Minnesota 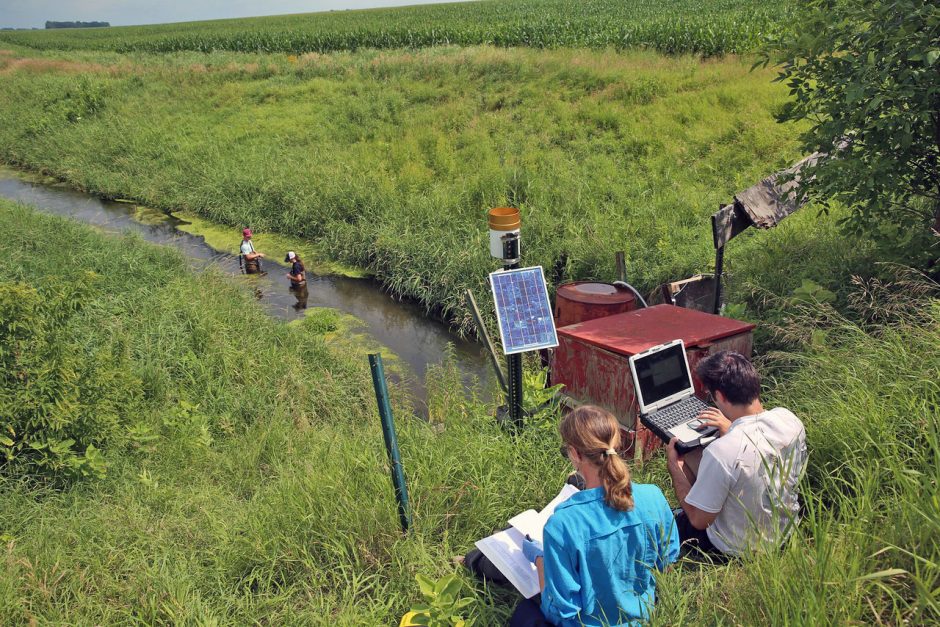 Meandering through Southern Minnesota, you’ll find the Minnesota River, which drains all of the state’s lower half. There is also a lot of agriculture in the region, and the people in the area have been working diligently to reduce nutrient pollution in the river. However, progress has been slow.

“You know, we’ve spent millions of dollars on the river, and some types of pollution have not improved,” states Dr. Laura Triplett of Gustavus Adolphus College, an Associate Professor in Geology and Environmental Studies. “The Minnesota River is still terribly impaired.”

Dr. Triplett and her students are working to find out why by monitoring the watershed and looking for answers.

“We are in the grunt work phase in order to answer some really important questions,” explains Dr. Triplett. “Right now, the main river that drains all of southern Minnesota is very heavily polluted with sediment and nitrate. We are doing some intensive monitoring of a small watershed in a very intensively farmed area. Since it’s small, hopefully, we can get a detailed picture of what’s working in terms of pollution reduction strategies.”

Although there has been long-term monitoring at the mouth of this stream, Dr. Triplett and her team are expanding the monitoring region to produce results they think might more accurately reflect what’s happening in the watershed. The uplands of the watershed are home to extensive farming operations, and then the stream cuts into a deeply incised ravine, then into a deeper valley, where it picks up significant amounts of sediment—and possibly other pollutants.

“Just monitoring at the mouth, we were afraid that any improvements that are actually happening on the uplands might be masked by other problems in the lower part of the watershed,” details Dr. Triplett. “That’s why we are going to start monitoring at the uplands as well and doing some field-scale monitoring of some of the best management practices that landowners have been implementing.”

Opening the project to students has not only made it more achievable but also created opportunities at the college.

“Another aspect of it being a small watershed is that the system is flashy,” remarks Dr. Triplett. “It’s pretty labor intensive to have people there during storm events, and to have auto-samplers, but then be collecting the samples frequently. We could have a storm hydrograph peak and start going back down within 24 hours. Fortunately, students who are signed up as research assistants get good real-world experience doing the work, and have that new energy for the work.”

Water monitoring in the “Land O’Lakes”

This is more than a simple academic exercise for Dr. Triplett and the team of students working on the problem.

“The people of Minnesota, we really value our water resources; it’s the ‘land o’lakes’ up here, with more than 10,000 lakes in the state,” Dr. Triplett describes. “People attach a lot of family traditions and cultural value to being able to go out on the lakes and rivers and really enjoy our natural environment.”

Because the rivers in the southern part of the state are so impaired, it is a high priority for the citizens. The state has invested millions of dollars in trying to understand where the pollution is coming from, how to stop it, and what kind of voluntary efforts can be used to remediate it. 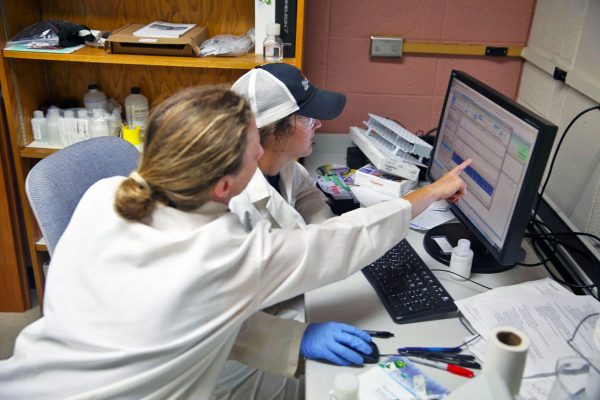 Dr. Triplett and a student in the lab. (Credit: Gustavus Adolphus College)

“Because we also like to get things done in a friendly way up here,” adds Dr. Triplett. “So we’ve been trying to see whether if we have incentive programs and if we have assistance programs, that will be enough to turn the tide on this river, and if so, what lessons can they take to other parts of the state.”

While some kinds of impairment in bodies of water—such as dead zones—can take time to retreat even when people are doing all the right things, this probably isn’t what is standing in the way of the Minnesota River’s recovery.

“In a lake with high levels of nutrient pollution, for example, it takes a really long time to ever get that out, if you can,” comments Dr. Triplett. “For a dead zone, it takes a while for that organic matter to break down and to accumulate all the oxygen that you need. The problems in the Minnesota River, though, because the water is continuously flowing and changing, it shouldn’t have that same kind of lag time.”

Of course, there may be other, unknown delays, and Dr. Triplett and the team acknowledge that it takes a long time to implement enough change to see it in the river. Nevertheless, Dr. Triplett feels that they should have seen an improvement by now.

“If we were doing the right things I think we would see by now,” concludes Dr. Triplett. “So I don’t think we have yet found the right combination of changes that need to happen, that’s my assessment of it.”

The team is monitoring for basic parameters: nitrate, phosphorus, TSS, and E. coli. They chose their monitoring sites based on the historical data they already have so that they can compare results, although Dr. Triplett would prefer data stretching back further.

“I think our data starts in 1986,” Dr. Triplett concedes with humor. “I’m a geologist though, so, although that’s not nearly long enough to me, I understand it’s more than what a lot of people have.”

The main idea is to collect enough current data for comparison with historical data to reveal any patterns between management practices and improvements in water quality that might exist.

“We are hoping we will see if some of the sub-watersheds have indeed reduced their nitrates or reduced the sediment, which for the upland part of the watershed would mostly be comprised of topsoil,” explains Dr. Triplett. “If we have reduced nitrate and TSS since the last time this was monitored intensively, about 10 years ago, that would be a good sign that we’ve been on the right track and the efforts are working.” 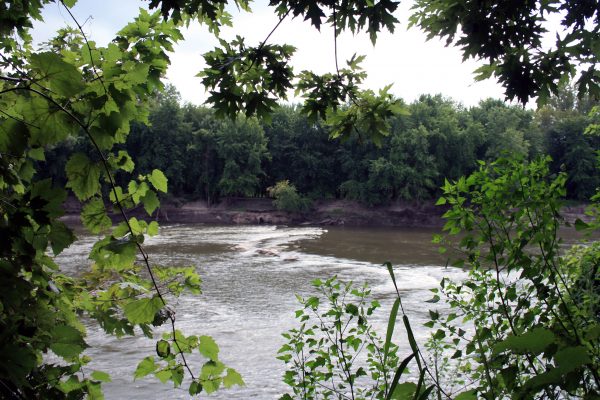 Floodplain forests historically dominated much of the floodplain along the Minnesota River. Today, this plant community continues to provide migration and nesting habitat for several significant birds that are a priority for the U.S. Fish and Wildlife Service. (Credit: Courtney Celley/USFWS)

At the moment the team does not see those kinds of improvements at the mouth, but that could be because that site encompasses multiple different dimensions of pollutant sources.

“Ultimately, we may be able to capture insights such as, for example, this sub-watershed up here has a big reduction in nitrate, what are they doing right?” details Dr. Triplett. “Okay, let’s do more of that. We have mapped out where landowners have been, for example, either installing bioreactors that will remove nitrogen, or installing buffer strips and infiltration basins that can reduce erosion. If we can then map that with water quality data and reveal a pattern, it will be a great sign of success for this watershed, but also a sign of promise for other watersheds, I think.”

Another interesting wrinkle in the watershed comes from the frequently impaired Seven Mile Creek, which is often in violation of the state standard for fecal coliform or E. coli. Now, some researchers from the University of Minnesota think there might actually be E. coli nativized into the stream sediment—which could render existing standards impossible to meet.

“It’s one thing if there’s a feedlot or something and you can track it back and say, ‘Okay, let’s change things,’ but if they’re actually colonizing in the stream sediment I think that raises two questions,” remarks Dr. Triplett. “One: is it still dangerous? And two: can we still do anything about it?”

In the meantime, Dr. Triplett and the team will continue to monitor in the watershed, looking for answers. Like most geologists, Dr. Triplett understands the value of patience.

“Once I have more data, I’ll feel like it’s more interesting to talk about, so give me a few years,” Dr. Triplett adds.