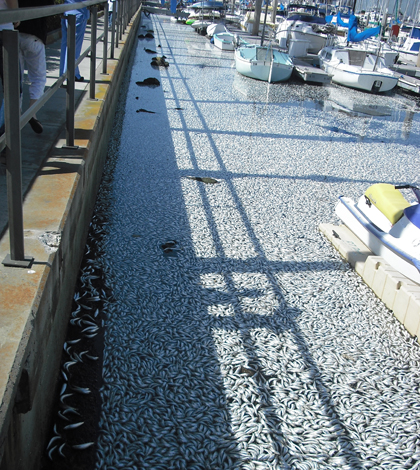 Fish kills are almost always quick and unexpected, leaving onlookers to wonder how a waterbody without any visible signs of distress could suddenly be topped with a layer of dead fish.

But in 2011, when 15,000 kilograms of dead sardines and other baitfish went belly up in King Harbor in Redondo Beach, Calif., a monitoring network installed five years prior was ready to help managers figure out what happened. Data from those sensors and other surveying efforts suggest that a combination of biological, meteorological and oceanographic events suffocated around a million fish in the harbor over a few hours.

This recreational and commercial harbor within Santa Monica Bay had seen an earlier fish kill in 2005. Anticipating that something like that could happen again, researchers from University of Southern California installed water quality sensors in 2006.

Two WET Labs sensors were affixed to floating docks in the harbor, one in its north basin and the other in the south. The sensors measure temperature, salinity, dissolved oxygen and chlorophyll a fluorescence every 30 minutes. A bleach injection system inhibits biofouling on the sensors.

Within hours after first hearing about the fish kill, a team of USC scientists had data in hand that began to tell the story of plummeting dissolved oxygen levels in the harbor.

“We started getting phone calls first thing that morning,” said Beth Stauffer, who was a graduate student at USC at the time. “We grabbed some lab gear and a small team of us went out and we immediately accessed that data.”

Stauffer, now a postdoctoral research scientist with the Lamont-Doherty Earth Observatory at Columbia University, is the lead author of an analysis of the data, published in Marine Ecology Progress Series. The study shows that dissolved oxygen levels leading up to March 7 were slightly below average but not nearly low enough to trigger a fish kill. But by midnight of March 8, oxygen in the north basin had plunged to negligible levels, suffocating the fish.

The study points to two contributing factors to the hypoxia. The first is the sheer abundance of fish in the harbor breathing it all up.

The second is related to the California Current system, which occasionally brings deep, offshore water and pushes it near shore. This upwelled water, which is characteristically low in oxygen, likely made it into the harbor and exacerbated the hypoxia there.

Around the time of the die off, the water quality sensors in the harbor detected a slight drop in temperature and an increase in salinity, which would be expected following a pulse of oxygen-depleted water from offshore.

While the sensors provided clues to what happened in the harbor, they also helped quickly clear up what didn’t cause the die off. The 2005 fish kill was anecdotally attributed to a toxic algal bloom that occurred around the same time. That led to early speculation that a similar bloom was again to blame. But the USC researchers determined relatively quickly that it wasn’t the case.

“We were able to have the data later that day that said there is very little biomass in terms of phytoplankton in the harbor, and there hasn’t been much biomass for several days,” Stauffer said.

In the days and weeks following the fish kill, the researchers recorded vertical profiles of the harbor and out into Santa Monica Bay by lowering a Hach DS5 Hydrolab multi-parameter sonde into the water column. They also deployed a YSI EcoMapper autonomous underwater vehicle along a transect in the harbor.
That additional data collection helped make it clear that the hypoxia was localized to the harbor and wasn’t showing up in the Bay.

These surveys also let the researchers watch the hypoxic system recover. Oxygen levels reset after a heavy storm blew through.

“For this system, it took a full overturning of the water column to get oxygen back into that northern basin,” Stauffer said. “The profiles and the Ecomapper were really important in helping us see that.”

Stauffer said that this study shows the importance of continuous monitoring systems in sensitive ecosystems where weekly or monthly sampling isn’t enough to capture a complete picture of environmental changes.

And it’s likely equally important to have a group of helpful people with open seats on their boats.

“This whole study was only possible with our great network of folks in the harbor,” she said. “The harbor patrol, the fire department and the lifeguards who let us go out on their boats with them for days and weeks.”