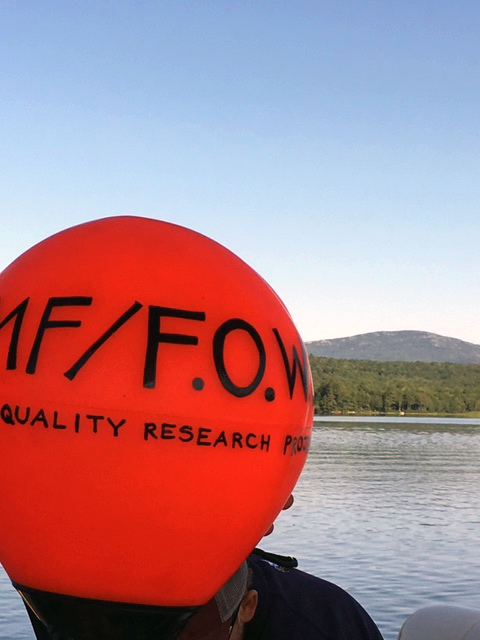 An up-close view of the buoy on the lake as the team gets ready to deploy it. (Credit: Dr. Rachel Hovel)

Since the summer of 2018, Wilson Lake in Maine hosted a data buoy that contains a set of long-term environmental data loggers. The rugged buoy was specially designed for year-round use, monitoring dissolved oxygen and temperature even when it’s locked in ice.

University of Maine, Farmington biology professor Dr. Rachel Hovel spoke to EM about the Wilson Lake buoy and her team’s work with its data.

“The ability to generate a long-term data set and collect these data over the entire year is really useful, both in the classroom and for asking questions about what’s happening in this lake,” comments Dr. Hovel.

Although the Wilson Lake buoy has been deployed for just over a year, these kinds of deployments have the potential to be very long-standing. Dr. Hovel and the team are working to get everything they can from the station’s consistent data collection across seasons and years.

“There’s no end time on our buoy,” remarks Dr. Hovel. “We plan to keep it out and maintain it for as long as we can. The only real maintenance that’s required is to go out and download the data and replace the membrane on the end of the dissolved oxygen sensors twice a year. Other than that, it’s fairly self-sufficient, which is really attractive.”

For years, limnologists have been mostly limited to studying lakes during the summer months. However, newer remote sensing technologies and materials are enabling data collection in colder temperatures and under the ice without damage to equipment. 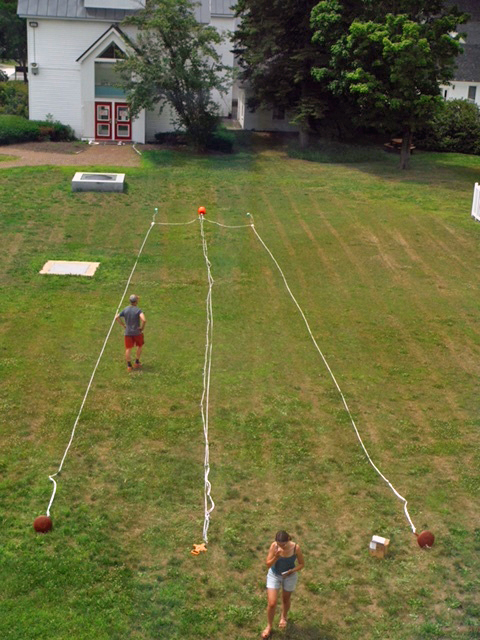 The team gets ready to deploy the buoy. (Credit: Dr. Rachel Hovel)

“There are many of these long-term monitoring buoys deployed worldwide, and many different models and methods for deploying them,” details Dr. Hovel. “Many buoys that people are deploying are really expensive and highly-parameterized. These are highly valuable, and we get a lot of good information out of them. But this is another model that people can deploy at smaller scales with lower budgets, and really fill a science and data gap, in that it can collect data throughout the whole year, and not just during the summer months.”

In dynamic spring and fall seasons—which are usually missed by lake monitoring buoys—lakes experience water column mixing and rapid temperature fluctuations, both of which strongly impact nutrient cycling and biological organisms. The buoy deployed in Wilson Lake actually freezes into the lake ice by design.

“Especially as we start to consider more winter ecology questions and the field starts to move more in that direction, I think this is a good potential avenue that’s not very burdensome from a resource standpoint,” adds Dr. Hovel. “A lot of the bigger buoys that some of our colleagues use have to be put in and taken out using an operation that sometimes involves a crane on a large boat. This buoy is accessible for smaller projects, such as those a lake association would develop, as long as they have enough funding to pay for the sensor. It’s relatively inexpensive to get it set up.”

The Wilson Lake buoy monitors dissolved oxygen and temperature using a series of sensors positioned at approximately 2-meter intervals and suspended from the buoy on a line. The line goes to the bottom of the lake, with the sensors recording information at specific points in the water column.

“We are thinking about lake stratification, which happens when the thermal environment in the lake changes, and you start to have a warm layer sitting on top of a colder layer,” Dr. Hovel describes. “How stratified a lake is and for how long that happens depends on the amount of sunlight, the temperature in any given year, water clarity, and wind dynamics. 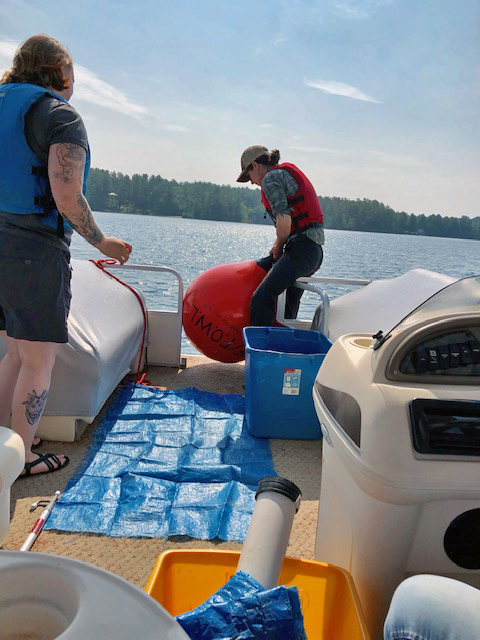 The team deploys the buoy on the lake. (Credit: Dr. Rachel Hovel)

In cases of significant stratification, conditions at the bottom may be very different from those at the surface due to this lack of mixing, and surface waters may be too warm for some cold water species.

“There are so many dynamics that stratification can really influence,” Dr. Hovel says. “For example, long periods of stratification can result in dissolved oxygen depletion at the bottom of lakes, and water column mixing can relieve those oxygen limitations by bringing well-oxygenated surface water to the benthic regions. Being able to capture those early spring and late fall periods in particular, when a lot of the larger monitoring buoys are out of the water, is a really important step to answering these questions.”

Among the things the team feels sure about: the winter dynamics of the temperate and boreal lakes they are studying are changing notably.

“Winter is warming more rapidly than summer in many places,” adds Dr. Hovel. “The sorts of things that we see as far as ice duration, water temperature, snow cover over ice and what that could mean for ice algae—I think there are just limitless questions that we can ask. And being able to understand what’s going on in the winter in these lakes, even a little bit, helps a lot in starting to understand how climate change impacts the lakes that we care about.”