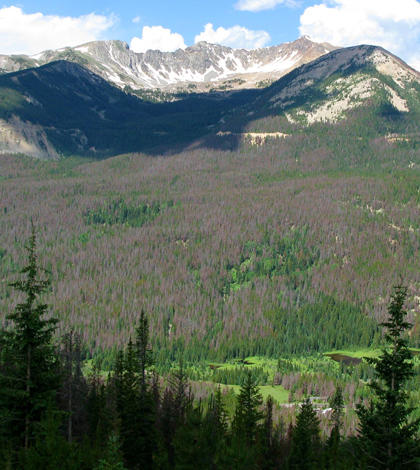 “The bark beetle has a important impact on water yield. It’s not just an aesthetic phenomenon,” said Ben Livneh, lead author of the study and a research scientist with the Cooperative Institute for Research in Environmental Science.

The study of forested mountain catchments within the Colorado River basin suggests that around 10 percent more water flowed out of catchments with lots of beetle-killed trees compared to those with intact canopies. The estimate of 10 percent is significant, it’s a fairly small number weighed against the year-to-year flow variability that can be as great as 300 percent. The research also found that particularly heavy accumulation of dust on the mountain snowpacks can hasten spring melting, causing peak runoff to hit two to three weeks earlier than normal.

“From a management standpoint, those are the two big features managed for,” Livneh said. “How much is coming and the timing of the big pulse coming through.”

Livneh’s research on the bark beetle’s effects on water was a project of the Western Water Assessment, a research program designed produce practical, usable scientific information for the West’s water managers. Part of the genesis of the project was a surprising year for managers in 2010, when predictive tools told them to expect a normal amount of runoff and they ended up with much more. Beetles and dust were both suspected causes. “There was a also a general sense in the region that the forests were changing and interest in what that portends for our water,” Livneh said.

Livneh and his colleagues turned to a computer model to create a picture of what was happening in watersheds where beetles have taken out forests. He thought the complex interactions between water and the landscape were too nuanced for scientists to draw meaningful conclusions based purely on streamflow and precipitation measurements.

The researchers plugged information into the model including data from meteorological stations in each catchment, topography, vegetation and soil texture. They also used leaf area measurements from satellites as well as annual beetle damage surveys conducted by the U.S. Forest Service. The results showed the effect of the bark beetle contributed to an 8 percent to 13 percent increase in the annual water yield.

The increase in water is thought to be the result of dying trees’ effects on sublimation and transpiration. When snow falls on a healthy canopy, much of it sticks to needles and branches before it can fall to the ground. The snow held aloft is more susceptible to the high winds that sublimate it into water vapor. In areas where swaths of trees have lost their needles after dying from bark beetle infestations, more snow falls to the ground where it’s more likely to stick around until it melts and becomes part of the runoff. And while healthy trees take up water and transpire some through their leaves and needles as vapor during summer, beetle infestations quickly shut down transpiration in the host tree, leaving more water behind that eventually makes its way to streams.

Even if the increase in water yield produced by the model is accurate, it isn’t permanent. Forests do recover from beetle infestations. With the canopy gone, more light makes it to the forest floor and saplings grow much more quickly. Livneh said that when he ran the model under a regrowth scenario, the water yield still increased, but only by about half as much. But the 10 percent yield increase is still a viable number in the early years of an infestation before regrowth picks up steam.

Livneh said a century of fire suppression has contributed to the bark beetle epidemic. Without natural fires to occasionally knock back patches of forest, trees across the West have grown old together. Stands of trees are uninterrupted by the dead or early growth areas that would otherwise serve as a natural barrier to the advancing outbreak.

“We’ve sort of created a condition where there are these huge expanses of mature forest that are just ripe for a big outbreak of some kind — whether it be fire or bark beetle — to rip though.”