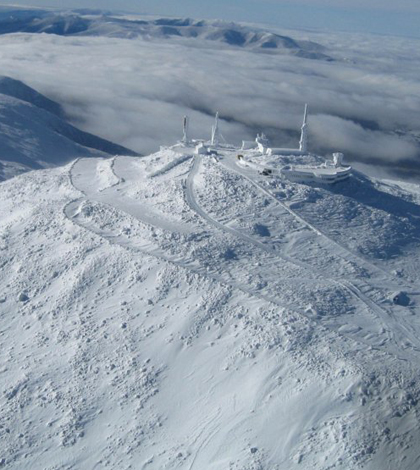 The fastest winds ever measured by humans in the western hemisphere didn’t blow across the barren lands of the Yukon or an Antarctic ice sheet. The 231-mph gust recorded in April 1934 whipped over Mount Washington, a New Hampshire peak about a three-hour drive from Boston.

A crew at the Mount Washington Observatory, a private, non-profit research institution, recorded the gust — which stood as a world record for 60 years until an Australian cyclone beat it by 22 mph in 1996. It was just two years after the facility opened, and since then weather has been recorded around the clock at the observatory, which styles itself as the “Home of the World’s Worst Weather.”

“The 82 years of the observatory’s existence and recording the weather every hour, 24 hours a day, 365 days a year really backs up that statement,” said Eric Kelsey, director of research at the observatory.

Even if some place in the world has worse weather than Mount Washington at any given time, the observatory’s hard data on its extreme conditions and its proximity to population centers give its mystique a boost. Around 300,000 people visit the summit in summer months, when the weather is relatively calm and the road up the mountain isn’t blocked by snow.

“In the summertime there can be extreme weather, but it usually gets plenty of nice days where the wind is below 50 miles per hour,” Kelsey said. The extreme conditions — a result of sitting at a common exit point for several regular storm routes across North America — and history of research have made the observatory a go-to facility for atmospheric studies and product testing.

From tents and other outdoor gear to coffee makers and dialysis machines, you name a product and it’s likely been tested there, Kelsey said.

Current research associated with the observatory includes a climatological analysis of its long-term wind record, which Kelsey said he was shocked to learn had never been done before he arrived in 2012. Wind speeds are what put Mount Washington on the map, he said, so it seemed like low-hanging fruit to take a look at how they have varied over the past 80 years.

The results could be especially valuable because many studies of long-term wind speed changes have reported a slowing trend, but the effect is often attributed to trees growing taller in the study area over the same time period. That’s not the case up on Mount Washington, which sits aove the tree line and away from other similar influences. The observatory has also supported research into the physics of ice, which can accumulate rapidly on Mount Washington. Based on their official weather standards, observers there would report an ice buildup of 3-6 inches in an hour as “light icing,” Kelsey said.

“That would take down an airplane easily.”

That’s a scary thought, but the so-called rime ice that accumulates up there can also be captivating.

“The supercooled water droplets will freeze on contact to whatever surface they hit and create these beautiful structures of ice. They look kind of like white feathers,” Kelsey said. “It’s a beautiful and extreme environment.”