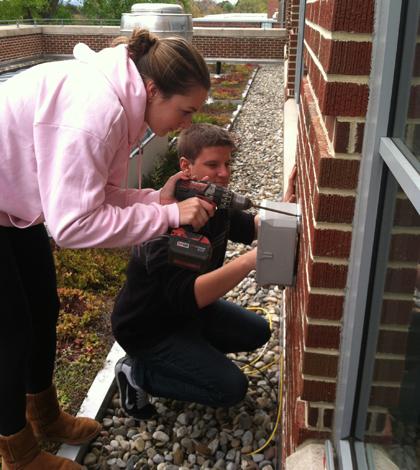 When Muhlenberg College’s capital projects manager David Rabold talked to students about what they wanted to see from a sustainable redesign of their beloved student union building, their message was clear. They saw the need for an update, but they also liked Seegers Union the way it was. So, as one student put it: Don’t mess it up.

“I like working with the students,” Rabold said. “It’s very refreshing.”

They were also an ideal partner on the building’s new green roof, playing a central role in the project from installation of the vegetation itself to wiring the roof with environmental sensors that will drive future student research. Rabold said putting the students on the project saved some money and helped stretch a grant from PPL Corporation that funded the roof work. More importantly, it followed the small Pennsylvania liberal arts college’s preference of giving students hands-on experience with live projects on campus.

A  group of eight to 10 students in the College’s interdisciplinary program in Sustainability Studies got the 2-foot-by-4-foot, pre-planted trays arranged and growing on the roof. After that, Rabold and Richard Niesenbaum, professor of biology and director of the Sustainability Studies program, left it up to the students in a project-based, problem solving course, Sustainable Solutions, to design and implement a monitoring system.

The student who picked out the sensors was given little other guidance than the direction to select equipment that could show whether the green roof was having its intended benefits. After some back-and-forth with Rabold over what would fit their budget, they ended up with a system that will track the roof’s carbon dioxide uptake, moisture retention and cooling abilities.

Erin Murphy, a junior environmental science major at Muhlenberg, was in the fall 2014 Sustainability Solutions class that was tasked with installing the equipment. She was surprised to find herself more or less learning to be an electrician, saying Rabold “gave us the equipment and showed us the wires and said, ‘Well, make a wiring diagram, put it together and we’ll see if it works.'”

It didn’t always work, but the team worked together to troubleshoot issues with tech support, especially when reading the manual wasn’t enough.

“One of the issues was the manual changed in the middle of our buying and installing the rain gauge,” Rabold said. The students picked the locations for carbon dioxide sensors, one over the green roof and another over a non-vegetated area to show the difference in gas uptake. They also placed moisture sensors to show how long the soil retains water, and temperature sensors over the green roof, and black and white areas of the roof to detect any cooling effects.

Once the sensors were in place, Rabold did his part to take care of the data connection. It was a challenge to get the logger linked into the campus network, which was “buttoned up tight,” he said. Barring a few last kinks to work out after the winter weather lets up, the monitoring network is up and running, ready to collect data that will be used by students in the college’s sustainability class.

Murphy said she’s ready to get back up on the roof this spring to keep an eye on the monitoring equipment she had a hand in installing, even though the work is no longer tied to college credit.

“I’m just interested in keeping that legacy running so that in the future other students can use it,” she said.