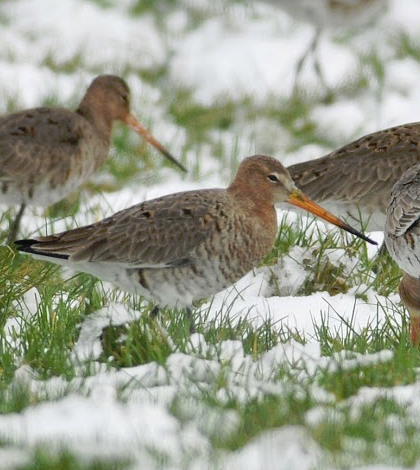 Godwits are really a very special part of the Dutch culture,” said Nathan Senner, ecologist at the University of Groningen. (Credit: Ignaas Robbe)

As a changing climate produces more and more unpredictable weather, scientists are concerned that many species — especially those that depend on seasonal transitions — will struggle to keep up with the chaos. When it comes to black-tailed dutch godwits, migratory wading birds with a limited European range, those concerns may be misplaced. A study of a rare spring cold snap in the Netherlands shows that the godwit can adjust its breeding schedule to cope with extreme weather.

A paper detailing the study’s results was published online in the Journal of Animal Ecology.

“Godwits are really a very special part of the Dutch culture — they are, in some ways, the Dutch national bird,” said Nathan Senner, post-doctoral fellow at the University of Groningen and co-author of the paper. “On top of that, they’re declining very rapidly. Since 1990, their population has fallen about 5 percent per year.”

Since 2004, the University of Groningen has contributed to a long-term demographic study of godwits that seeks to monitor all aspects of the birds’ migration and reproductive biology using both satellite transmitter tags and behavioral observation. But a couple of years ago, a freak weather event gave the university’s researchers a chance to study how the birds would respond to a disruption in their breeding season.

“In 2013, we had this really crazy spring — or sort of a lack of spring — punctuated by this snowstorm,” Senner said. “Not only was it very cold, but it was very dry. We really thought it was going to be a catastrophe.”

A handful of researchers and many more citizen scientists observed color-tagged godwit populations over a 12,000-hectare area, with a 12-person team monitoring 44 specific females across a 220-hectare region. Each day, the researchers calculated how much time the birds spent feeding, and how successful their feeding efforts were.

The researchers also searched the entire study area for nests starting in April 2013. Nest coordinates were marked down and nest sites visited regularly, both before and after hatching. Some of the studied godwits made reverse migrations of more than 250 kilometers to avoid the three-week cold snap. (Credit: Nathan Senner via Journal of Animal Ecology)

“The exciting part was that we could document what the different birds did over a range of spatial scales,” Senner said. “Some birds stayed on their breeding territories and had to spend a significant chunk of daily time feeding to stay warm.

“But then we were able to document that a lot of birds actually flew back south, sometimes more than 250 kilometers,” he added. “That in itself is a pretty unusual finding.”

Ultimately, the researchers found that, across all spatial scales, the birds were able to successfully cope with the three-week cold snap. Nearly all the birds that made a reverse migration returned north and sought shelter in nature reserves, which Senner says indicates the importance of maintaining high-quality habitat, even for such apparently flexible birds.

But most of the godwits, Senner said, actually delayed their migration from the start, waiting out the weather in warmer lands.

Extreme weather isn’t exactly a positive thing for godwits, the study points out. In many cases, the birds had to spend more time and energy foraging for food (though interestingly, they seemed to catch more prey than normal on the coldest days).

On the same note, the researchers observed no negative long-term effects, and the study suggests that such a weather event may not even be terribly stressful to the godwits, as they have “an unusually long interlude” between when they arrive at their breeding site and when they begin work on their nest.

Senner says that the University of Groningen will continue its research to learn more about how godwits cope with other extreme weather events, such as droughts and flooding, which many climate models suggest will occur more often in the coming years. As tagging and tracking technology improves, Senner hopes to develop more holistic, multi-faceted methods of monitoring these birds’ behavior.

“What makes this study so exciting to people is not so much that we had any one piece of data, but that we had a lot of different pieces of data people aren’t usually able to pull together in a single study,” he said. “We tried to harness [tracking] technology in one way, and then bring it together with these behavioral observations.”