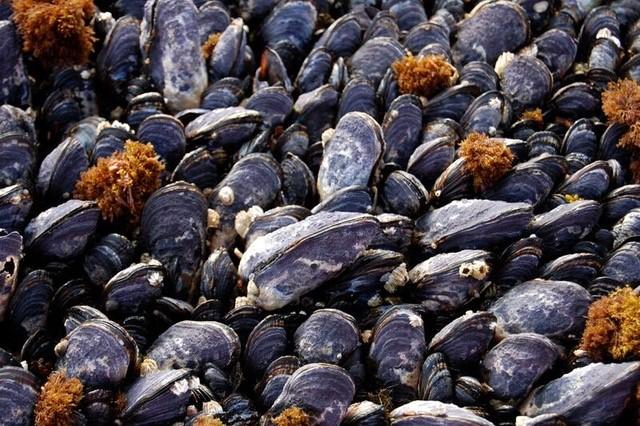 McCoy and her team found that ocean acidification has begun to change California mussel shells on a basic structural level. (Credit: Sophie McCoy)

New research reveals that accelerating ocean acidification may be forcing the California mussel to adapt, transforming its fundamental shell structure. Although the mineralogical makeup of this mussel’s shell has remained stable for millennia, comprised of neatly ordered, geometrically regular vertical rows of long, cylindrical crystals of calcite, recent samples exhibit structural changes that appear to be the result of escalating ocean acidification.

“Mussels are a widely studied component of coastal marine communities, so they have always been an organism of interest,” comments Dr. McCoy. “Once we discovered a recent trend of declining seawater pH at our study site in coastal Washington, we initially turned to mussels to see if they had recorded any past seawater climate history in the yearly growth bands of their shells. As we were working with the older mussel samples from 2500 yr BP (accessed via the Makah Cultural and Research Center), we were struck by how visibly thicker the shells were. So, trying to understand what was causing that pattern became our next project.”

After securing samples, the team imaged and analyzed them.

“We imaged the mineral structure using Electron Back Scatter Diffraction (EBSD), which comes off of a Scanning Electron Microsope (SEM) as low-angle electrons diffracting off the sample surface,” details Dr. McCoy. “We used Raman spectroscopy to look at the amount of magnesium present, which is another indicator of unstructured calcium carbonate that the animal typically controls tightly.”

The crystals in more recent shells from California mussels are small and disoriented—a significant structural shift. To confirm the trend, the team studied modern mussel shells, shells from other decades in this century, and shells that were thousands of years old. They determined that shell mineralogy was remarkably consistent—until about the last 15 years. This rapid structural shift feels significant.

“The onset of this mineralogical change is definitely striking,” remarks Dr. McCoy. “I see it as a progression of physiological stress. When we look at the thickness of the shells (referring to our 2016 study), it appears more gradually over several decades. The shell mineral structure has changed only in the last few years. To me, this indicates that it could be a threshold response. Thinning the shell reduces the amount of shell that needs to be made, but if environmental conditions make that harder to do, then the mussel eventually can’t keep up with it.”

The meaning of the coping mechanism

In the past, mussels would construct shells in a two step process, first producing an unformed calcium carbonate soup, and then organizing and ordering that soup to form a coherently structured shell. More recent mussels have built their shells by simply producing the calcium carbonate soup in the right location and leaving it disordered.

These disruptions in the shell formation process are specifically linked to acidification.

“Ocean acidification is disrupting the availability of carbonate (CO3 2-), which is a resource that mollusks need to make their calcium carbonate shells,” explains Dr. McCoy. “This happens in two ways. As we emit more CO2 into the atmosphere, about 1/3 of that dissolves in seawater. That increases the total amount of inorganic carbon available in the ocean. However, CO2 combines with water to make carbonic acid, which drops the pH of seawater. That changes the relative proportion of the different forms all that carbon can be in. So, more of it is available as carbonic acid or as bicarbonate, and less is available as carbonate. That requires more effort on the part of the mussel to gather that carbonate before it can make its shell.”

The more modern shells also incorporate elevated levels of magnesium—another sign of disruption. Higher levels of skeletal magnesium triggers differences in the strength of magnesium-oxygen bonds. This is important, because there is a direct connection between the level of organization in a shell and the robustness of these bonds. More variable bond strengths seem to come hand in hand with disordered shell structure. “It’s not known yet what the exact repercussions will be of these poor-quality shells,” remarks Dr. McCoy. “However, a less organized mineral is much softer, and more prone to being damaged and easier to get through for their predators, which include otters and sea stars.”

Furthermore, these structural changes are not prompted by ecological advantage.

“The difficulty of laying down skeleton or shell in the current seawater conditions is because of chemical changes to seawater, not because that is ecologically better for mussels to have a thinner or weaker shell,” Dr. McCoy points out. “They still need strong shells for protection from predators and physical disturbances, and to form the mussel bed structures that are so iconic on US Pacific shores. However, a weak shell is better than no shell.”

Evolutionary changes are very slow. The kinds of changes being observed in the mussels are rapid, however, and signal a disruption of the normal formation process more than classic evolutionary adaptation—although adaptation might still take place.

“One reason we wanted to conduct this study on natural populations over such a long timescale was to account for the rate of change of this stress and all the context of a natural population over that timescale,” comments Dr. McCoy. “Because we have not done any genetic analysis, I can’t make any conclusions on the evolutionary scale. Results that other researchers have shown from lab experiments suggests to me that we are not looking at evolutionary changes, only changes in physiology or possibly development in this particular case.”

The trend toward variable, disorganized shell structures over the last 15 years is linked to the rate of ocean acidification that is rapidly accelerating as our climate changes. These structural changes leave the California mussel fairly vulnerable to predators, but the variation the team has observed in the shell structures might also mean that the species can survive; more variability will provide more opportunities for natural selection.

“One big thing we noticed was how inconsistent this response is between individual mussels,” Dr. McCoy adds. “This tells us that some of them are better at coping with this stress than others. That variance between mussels seems to be a stress response in newer samples, and not something that we observed in any of the historical specimens.”

And it may be cause for hope in terms of the survival of mussels in a future impacted by a rapidly changing climate—at least scientists like Dr. McCoy think so.