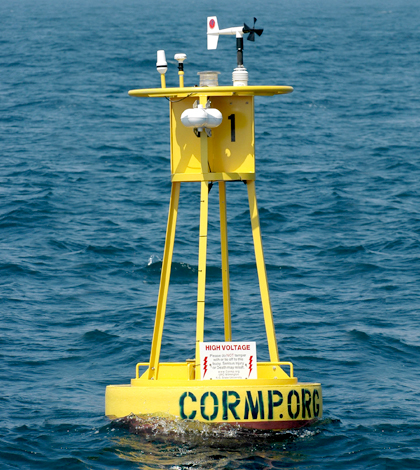 Earlier this year, a coast guard vessel picked up an ocean observing buoy off the coast of Jacksonville, North Carolina, before it could break away from its mooring. The maintenance funding for the buoy had dried up, and the loss of wave and weather data was felt by everyone from anglers to the U.S. Marine Corps base on Onslow Bay. Now, a university-based ocean monitoring program turning to that community to fund a more cost-effect replacement

The late buoy 41036 was one of nearly a dozen moored monitoring stations once supported by the Coastal Ocean Research and Monitoring Program at the University of North Carolina Wilmington. As federal funding for ocean observing has dwindled, CORMP has dropped to just six stations, said Jennifer Dorton, the program’s coordinator.

“Though the loss of another one is not unusual, this one is actually quite critical,” she said.

The buoy floated offshore of Marine Corp Base Camp Lejeune, the largest such base on the East Coast and a major user of information from 41036, she said. The data helped with space and environmental monitoring programs and offshore training operations. The Coast Guard also used the buoy for search and rescue activities.

The data was also important for Morehead City, a port town east of Jacksonville. It was the only buoy the National Weather Service office there had for accurate marine forecasts and tracking storms, Dorton said. Morehead City is also home to a substantial charter and commercial fishing fishing fleet that used the buoy data to check conditions before heading out. It was especially useful during the Big Rock Blue Marlin Tournament hosted by the town, which draws more than a hundred boats seeking part of the $1 million prize purse. The decommissioned buoy required large vessels that were expensive to charter for maintenance. (Credit: UNCW/Jamie Moncrief)

But as CORMP’s budget shrank and maintenance costs grew, Dorton said the program couldn’t fund the buoy any longer. Between the upkeep fees from the National Data Buoy Center and chartering a vessel to get the technicians out there, the costs had grown to nearly a third of the program’s budget.

Just as the area’s fishermen used the data before it was lost, they also had an idea for how to get it back, Dorton said. Why not see if the community could fund a replacement?

Now a plan to do just that is underway. CORMP is looking to raise $16,000 in donations to fund a smaller, more cost-effective buoy similar to others that the program has deployed elsewhere in the bay. The maintenance costs for the smaller buoy are much lower because the program can in-house technicians and can a smaller boat from the university to access it. Buoy 41036 was a comparatively hulking structure that needed a vessel with large capacity and lifting abilities.

The smaller buoys measure important wind and weather variables, as well as water temperature and salinity. It lacks the wave data of the old buoy, but the National Weather Service can get a fairly accurate estimation of wave conditions based on wind speeds measured by the small buoy.

“They can do a lot better than with no data,” Dorton said.

The $16,000 would fund instrumentation for the buoy as well as the satellite communications package that gets data from the sensors to shore where the community can use it. The donation drive is still in the planning stages, including a March 26 public meeting to raise awareness.

CORMP is funded by the National Oceanic and Atmospheric Administration’s Integrated Ocean Observing System through the Southeast Coastal Ocean Observing Regional Association. Though funding may be declining, CORMP’s mission has stayed the same, said Lynn Leonard, the program’s director and professor and chair of the Department of Geology and Geography at University of North Carolina Wilmington.

“Our commitment exists to providing these observation for those offshore users — mariners and the general public — so this is just the opportunity that is in front of us to do what we have prioritized since 1999,” she said.