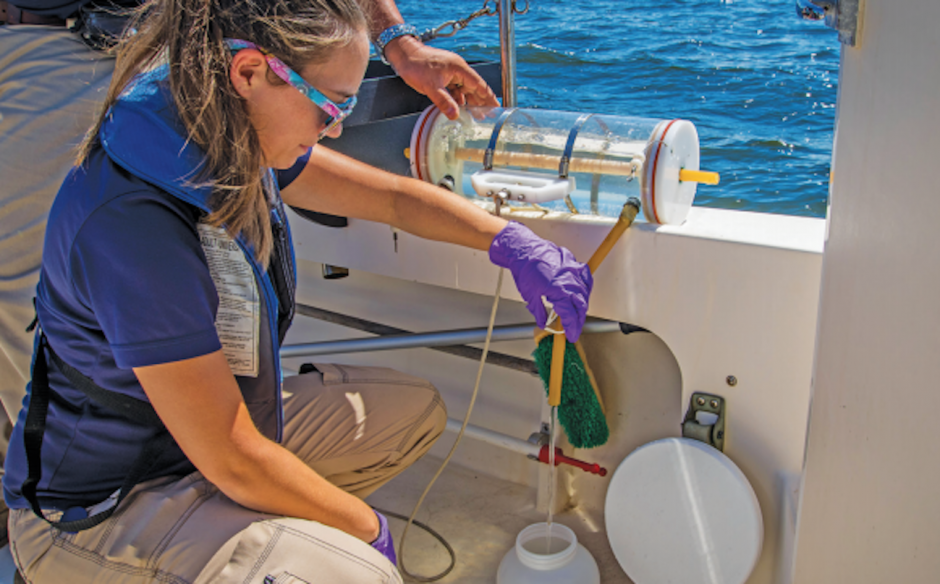 The many fingers of water that comprise Narragansett Bay define the state of Rhode Island; not just its shoreline, but its inland areas are almost all proximal to the Bay and its watershed. More than 33 percent of Rhode Island is water, even at low tide, making it the third wateriest state in the union, second only to Hawaii and Michigan.

The Bay itself holds 706 billion gallons of water, and the watershed includes over 170,000 acres of land. With the tide, the water in the Bay rises or falls three to four feet every 12 hours, but its average depth is 26 feet. This constant motion allows the Bay to function as a filter for the entire region, much like the lymphatic system works in the human body, flushing out pollutants as it renews its water completely every 26 days.

However, like other American wetlands, the Narragansett Bay Watershed is a fragile ecosystem, now under threat from all sides. Industrial growth, pollution, and population growth all have the potential to damage the watershed, although upgrades to infrastructure have mitigated against these problems to some extent. Now, the watershed faces its most serious threat to date: climate change and everything it will bring with it.

“State of Narragansett Bay and Its Watershed” 2017 report

Starting in 2014, more than 50 experts from agencies, organizations, and universities in Rhode Island and Massachusetts began to collaborate under the umbrella of the Narragansett Bay Estuary Program (NBEP). Their aim was to track 24 key indicators in the Bay and Watershed to assess the biological, chemical, and physical conditions, describe recent and past trends, evaluate key stressors, predict potential changes, and identify research and data needed to advance these changes. The end result of their collaboration is the 2017 State of Narragansett Bay and Its Watershed report, which was released in October 2017.

The report reveals several major themes, but perhaps the most notable was that although water quality in the Bay has improved, stressors associated with climate change are increasing rapidly—and may defeat the progress that has already been made. Dr. John King, an oceanography professor and member of the Narragansett Bay Estuary Program, was part of the team who created the report. “Correct about climate change [stressors increasing rapidly], but sea level is only part of the problem,” Dr. King explained. “We are expected to get more extreme climate events like storms, and precipitation events (floods), more rain overall in winter and spring (about 30 percent more), and then more droughts in late summer and fall. All of these climate associated changes will tend to overwhelm the improvements that we have already achieved, or could achieve in the future.”

In the recent past, large volumes of toxic contaminants and minimally treated sewage went into Narragansett Bay every day. This caused unhealthy swimming conditions and killed or contaminated fish and shellfish. However, major investments in wastewater facilities in the past 15 years in particular along with stricter regulation of harmful chemicals resulted in a major drop in pollution and a decline in excessive nutrients, pathogens, and toxic pollutants in bay water. For example, according to the report, “A comparison of nutrient budgets from 2000–2004 and 2013–2015 revealed a 55 percent decrease in total nitrogen from wastewater treatment facility loadings throughout the watershed and a 45 percent decrease in total phosphorus.”

However, a failure to address the dangers of climate change could wipe out all of these hard-fought victories in the region. Climate change and rising sea levels are a major threat to water quality, especially in a place like the Narragansett Bay Watershed.

“Sea level rise threatens a lot of wastewater infrastructure such as treatment plants and sewer lines because they are at low elevation,” states Dr. King. “More extreme precipitation events overwhelm wastewater treatment infrastructure. Some low lying towns like Barrington and Warren [Rhode Island] get a significant part of the tax base inundated. The financial district in Providence and other areas that are economically important such as the Quonset and Newport waterfronts, and all ports, are at risk.”

The 2017 State of Narragansett Bay and Its Watershed report is a large-scale study with a tremendous amount of data. The monitoring efforts of many experts made the report possible. For example, although the team knew that less pollution from wastewater treatment facilities was entering Narragansett Bay, how that reduction in pollution is affecting the ecosystem still needed to be investigated.

To illuminate this question, the Estuary Program analyzed data for several ecosystem condition indicators that they expected to fluctuate as pollution decreased. The teams conducted monitoring in Bay waters; at least 13 sites were monitored daily to weekly depending on the station, and numerous additional sites were monitored five to six times during the summer season.

The data collected showed that seafloor habitats in the Bay improved between 1988 and 2008. This trend was apparent because in 2008, the teams found beds of Ampelisca, small, tube-building crustaceans, covering much of the seafloor throughout the middle and upper Bay. This was a welcome change, because the benthic presence is one of the early signs of improvement.

Long-term trends were not discernible for indicators such as chlorophyll, dissolved oxygen, and water clarity, in part because they vary greatly from year to year. However, the teams did note that both chlorophyll and dissolved oxygen levels were higher during wet years, determined as such based on the freshwater flow from major rivers and amount of precipitation.

This is just one small snapshot of a very detailed technical report that draws on the technical contributions of many scientists; read the entire report here.

Moving forward, the real question will be whether this kind of detailed, scientific record, calling for action and, specifically, protection for a coastal area threatened by climate change, will influence policy. Dr. King and the team have already presented the report to some policymakers, and thus far have not faced much climate change denial locally. “The general public in New England has accepted climate change as fact and so have policy makers,” Dr. King confirms. “The major problem that we faced was attempted censorship by EPA leadership in DC. They are world-class climate deniers.”

This became abundantly clear when the 500-page report was finally released in October after three years and much anticipation at a scientific conference in Rhode Island. The conference itself received an unusual amount of attention, because although officials from the EPA were allowed to attend the conference, they were prevented from presenting at the conference by EPA leadership.

Locally and at the state level, there are plans in place already to protect the area against the effects of climate change. The Governor of Rhode Island, for example, has a task force working on this issue, and RIEMA, the state of Rhode Island’s version of FEMA, has various plans in place. However, as Dr. King points out, controlling greenhouse gases is something that will take a concerted effort at all levels of government—and this affects everyone, not just the people living in the Narragansett Bay Watershed, although they may be among those who feel the effects first.

“We have two classes of scenarios moving forward that are driven by our ability to quickly control the level of greenhouse gas emissions,” Dr. King warns. “If we don’t control them, then climate change will be a disaster for the biosphere and for human culture. If we do control them, then things will be bad but manageable, and impacts will be significant, but some version of life as we currently know it will go on. We can choose the scenario, but we need to do so very quickly. If we want low-end scenarios and there will be some pain involved with implementing those scenarios. We would be foolish to not move quickly. National leadership in the US is currently lacking on this critical subject.”