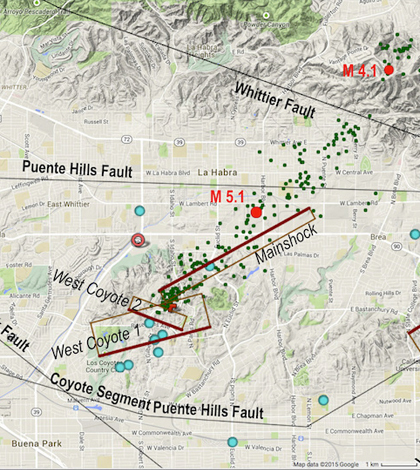 A new study suggests that a magnitude 5.0 or greater earthquake is likely in the Los Angeles area in the next few years. (Credit: JPL)

A NASA-led study predicts the Los Angeles region may see a significant earthquake soon, according to LiveScience. The study, published in the Earth and Space Science journal, states that the region has virtually a 100 percent chance of having an earthquake with a minimum 5.0 magnitude as early as 2017. Although researchers have predicted the impending earthquake, they cannot determine its target location.

Their findings come from examining ground deformities resulting from the 2014 La Habra earthquake. The scientists used GPS data, computer models and a specialized tool attuned to the tiniest changes in the Earth’s surface.

They found the earthquake caused more ground damage for a quake of its magnitude and that superficial motion along buried faults caused the movement. The latest analysis suggests that some faults are combined and can result in greater damage.

But not all models guarantee an eminent earthquake for the Los Angeles area. The U.S. Geological Survey predicts an 85 percent chance of a similar earthquake by 2018.

Top image: A new study suggests that a magnitude 5.0 or greater earthquake is likely in the Los Angeles area in the next few years. (Credit: JPL)