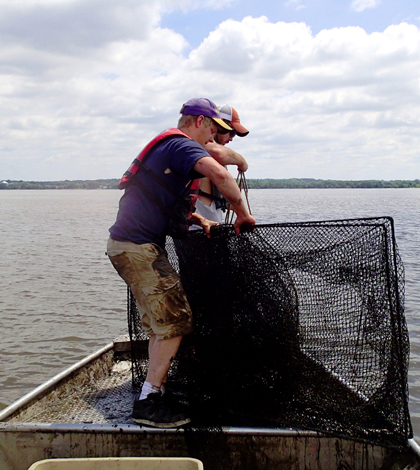 Studying in the La Grange Reach of the Illinois River, scientists at Western Illinois University in collaboration with the U.S. Geological Survey, the Illinois Natural History Survey and the Upper Midwest Environmental Sciences Center have found that native fish species prey heavily on juvenile Asian carp. The tendency may be useful as a control method, but the speed at which Asian carp mature could limit its effectiveness.

Researchers worked out of the Illinois River Biological Station at Havana, Ill., to make the discovery, employing techniques like electrofishing and stomach content analysis to figure out how native fish there interact with young Asian carp.

“While we were sampling, we observed lots of juvenile Asian carp, so it was the perfect place for us.” said Cory Anderson, who conducted the work alongside graduate student Rebekah Haun while he was a research assistant in the Department of Biological Sciences at Western Illinois University.

Scientists considered all the predatory native fish they could get their hands on, including white bass, largemouth bass, shortnose gar, flathead catfish and black and white crappie. It was easy to see if a fish had eaten a young carp, says Anderson, because carp have pharyngeal teeth.

Regardless of the carp species, they all develop these teeth at a young age and carry them through to adulthood. When a juvenile Asian carp is eaten by another fish, researchers found that these teeth were the last things to digest. But they also took DNA samples to identify the exact species of Asian carp that were eaten. “We were able to use the teeth of Asian carp, pharyngeal teeth, because the juveniles look so much like the adults,” said Anderson.

That approach yielded some interesting finds. White bass, which were evaluated throughout a year, fed heavily on juvenile Asian carp. About half of all the white bass sampled had Asian carp in their stomachs. Shortnose gar was another species that developed a taste for the carp, as 60 percent of gar were found to have eaten them.

It’s important to note that shortnose gar were only sampled during one month, but there were enough data to explain the high numbers of Asian carp that they ate.

“We’re not sure about the white bass, but the gar — they’re a surface-level feeder,” said Anderson, describing how juvenile Asian carp often congregate near shorelines. “It seems like their feeding style worked for the carp.”

Channel catfish were also found to eat a lot of the young carp. Thirty-nine percent of catfish had eaten one, which wasn’t surprising since catfish eat pretty much whatever is available and there were a lot of carp to eat at the time, says Anderson.

“It would be weird for something not to eat them, because there were millions of these fish,” said Anderson. But he stops short of recommending native fish predation as a method to control the carp. “It limits them to a point, but they grow so fast that they can only be eaten by our (native) fish for a short time. They flood the system and outgrow predators so quickly that it may only be useful for a short time.”