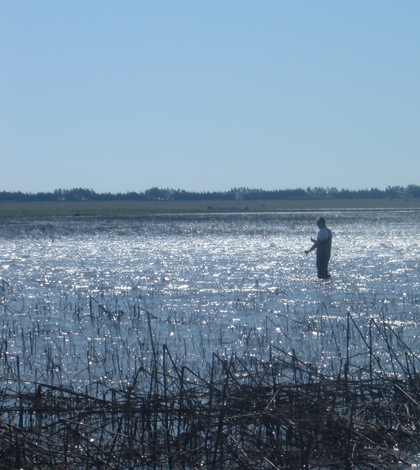 The abundant wetlands of the Nebraska Rainwater Basin make it a crucial stopover site for birds migrating along North America’s “central flyway,” a route through the Plains states that takes some species as far north as the Arctic Circle and others as far south as Patagonia.

The wetlands are nestled in a landscape dominated by agriculture, including some of the most productive corn and soybean crops in the country, leading to concern that runoff from fields and confined animal feeding operations may be threatening the wetlands’ ability to support that stopover function. A recently published study from the U.S. Fish and Wildlife Service and the University of Nebraska shows that wetlands without some measure of protection against runoff lack sensitive invertebrate species–a loss that could be leading to an ecosystem breakdown.

“There are some major concerns for this breakdown and what it could mean for the health of the system and those birds gaining the nutrients for continuing their journey south or north,” said John Riens, a biologist with the U.S. Fish and Wildlife Service and lead author of the study.

The research assessed 12 wetland sites within the service’s Waterfowl Protection Areas. The agency owns more than 22,000 acres across 61 such areas in the Nebraska Rainwater Basin, which is manages for habitat conservation and public use.

At six of the study sites, agricultural runoff had direct access to the wetland through culverts or drainage ditches. Vegetated buffers protected the other six sites from runoff. Through three years of data collection that began when Riens was a master’s student at University of Nebraska at Kearney, the researchers evaluated the differences in sediment, water quality and macroinvertebrate diversity between the buffered and non-buffered sites. According to the results of the study published in the journal Wetlands, the non-buffered sites generally had higher levels of turbidity, conductivity, nutrients and the herbicide atrazine. But the water quality data doesn’t tell the whole story, Riens said, since many parameters were only sampled once every two weeks. That made it difficult to sample immediately after rain events when pollution levels would be the highest.

“It didn’t really represent some of the peak discharge times that created toxic zones for the organisms in the wetland,” Riens said. “That’s why we really leaned on the macroinvertebrates because we though the they were good bioindicators of the health of the system.”

The indication from the invertebrates is that the non-buffered sites weren’t very healthy. Macroinvertebrate samples from those wetlands rarely included sensitive species like dragon flies and mayflies that were common in buffered sites.

The gutted invertebrate communities in the non-buffered sites is troubling for a couple of reasons. First, the bugs and snails themselves are an important food source for migrating birds, some serving as a source of protein and others providing calcium for egg shell development. Second, the species that were missing in the non-buffers sites help break down organic material, a process that enriches the soil with nutrients to be taken up by early successional plant species characteristic of these wetlands–another important food source for migrating birds.

“When we start to get a crash in those macroinvertebrate systems, the whole system breaks down, essentially,” Riens said. “And then we’re not getting that organic decomposition and a number of other problems will arise with water quality.”

More research is needed to understand the effects of vegetated buffers on these wetlands, which host millions of birds across dozens of species, including ducks, piping plovers, and sandhill and whopping cranes

“The amount of birds that show up there is pretty obscene,” Riens said. “When the cranes come up, it’s one of the top ten wonders of the world.”