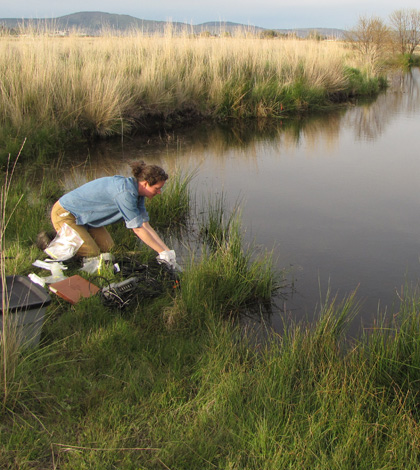 Amphibian chytrid fungus is implicated in the drastic decline of amphibians across the world, but much about the disease it causes remains unknown. A new study presents a first step in understanding how the fungus persists in aquatic habitats before it takes up residence in frogs themselves.

Scientists discovered the fungus and its effects in 1998 after frog populations were found declining in remote, protected areas where some of the usual threats to amphibians — habitat loss and pollution — didn’t apply. The fungus has since been found killing frogs in Australia, the western U.S., South America and more places across the globe.

Yet many aspects of the disease are still unexplained. For example, it infects some populations while others appear immune for reasons that aren’t clear.

“We don’t know a lot about it,” said Tara Chestnut, a U.S. Geological Survey ecologist and lead author of the new study. “We, in fact, know very little about it.”

Chestnut’s study, published in the journal PLOS One, put to use a set of lab tests and statistical models that can quickly and reliably detect the fungus in a waterbody with just a few water samples. Most research on the disease has focused on the fungus’ life in its amphibian hosts, leaving little known about the free-living form that persists in the environment. Scientists don’t know, for example, whether it takes a certain concentration of the fungus in a habitat to trigger infections, or if the fungus is more abundant in some seasons than others.

The study “sets the groundwork so that we can start asking those kinds of questions,” Chestnut said.

The scientists applied the tests to samples from 41 sites across nine states, mostly in the West. Tests on DNA filtered from the samples indicated that the fungus was present at 47 percent of those sites. But the statistical models, which were deigned to guard against false negatives, suggested that 61 percent of the habitats harbored the fungus.

In addition to that pioneering picture of where the fungus occurs across a wide geographic range, the study also offers a first look at amphibian chytrid fungus concentrations in the environment. Most positive samples had a few dozen to a few hundred zoospores per liter of water. Two samples from Nevada held 2,100 and 4,900 zoospores per liter. Another sample, the last one collected from a four-year case study of a wetland in Beaverton, Oregon, produced a whopping 3 million zoospores per liter.

“That’s a lot, and way more than we really anticipated,” she said. “But we also didn’t know (what to expect).”

The study showed that the fungus appeared in the environment year-round, with an expected concentration spike in the spring. What they didn’t expect was that the concentrations in the water would also elevate in the summer — a time when the fungus’ numbers within actual frogs tends to drop off. That may have something to do with the frogs’ ability to “bask” in the summer sunlight and pass bodily infections despite high levels in the water. The amphibian chytrid fungus is one of 1,200 known chytrid species but the only one known to parasitize a vertebrate host. Some depend on living plants or microbes, while others are important decomposers of materials including cellulose and chitin.

“They’re your best friend if you have seasonal allergies,” Chestnut said. “Chytrids are one of the primary things that decompose that pollen.”

That’s not the case for the world’s amphibians, which are in the midst of a global decline going back to the 1980s. Around 40 percent of amphibian species are estimated to be experiencing shrinking populations. But that’s not all the fungus’ fault: The disease is just one more ingredient in a deadly cocktail that already includes pollution, habitat loss, overharvest and invasive species.

“When you have disease on top of that, it can be the final straw in some cases,” Chestnut said. “Its a complex issue where disease is just one of many components that is causing amphibians’ declines.”