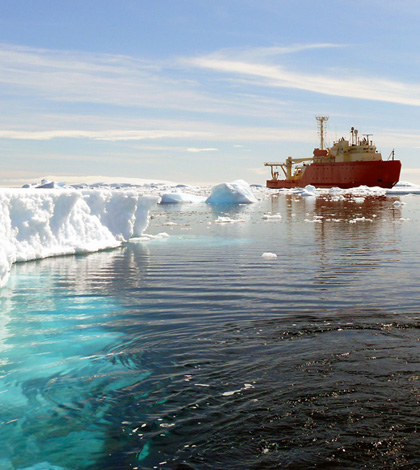 UW's profilers will monitor the ice-filled waters of the Southern Ocean, which can be dangerous for research vessels (Credit: Oscar Schofield/Rutgers University)

The University of Washington is one of the partner institutions that helps maintain the U.S. half of the massive Argo ocean-monitoring network. Because of that background, researchers there have been tapped to help instrument another section of the world’s oceans with profilers.

Along with nine other institutions in a six-year program funded by the National Science Foundation, UW scientists will be building new profilers with updated specs to monitor Antarctica’s Southern Ocean. It comprises the seawater that circles Antarctica, takes in much of the carbon emitted by humans each year and likely absorbs much of Earth’s excess heat. That carbon cycle is of particular interest to the world’s scientists.

“The goal of this project is to understand the uptake of carbon, specifically carbon dioxide, in the Southern Ocean,” said Stephen Riser, professor of oceanography at the university, in a release. “I hope we can understand that better and see exactly where that’s happening and why.”

Nearly 200 profilers in all will be built at UW out of commercially available components and sensors. Some have already been assembled and their design incorporates more biological and chemical sensors than their Argo network counterparts. Scientists ready a profiler on a research vessel in the Anarctic (Credit: Annie Wong/UW)

The new profilers include sensors for measuring dissolved oxygen, nitrates, acidity, chlorophyll and dissolved carbon dioxide. Each will descend a mile into the Southern Ocean’s waters to take readings and surface to transmit data to researchers via satellite. The data sent will increase observations collected in the area by 10 to 30 times.

“The scarcity of observations in the Southern Ocean and inadequacy of earlier models, combined with its importance to the Earth’s carbon and climate systems, means there is tremendous potential for groundbreaking research in this region,” said Jorge Sarmiento, professor of atmospheric and oceanic sciences at Princeton University and the project’s principal investigator, in the release. Earlier this year, researchers successfully tested the new profilers off the coast of Australia. The first 16 will splash into the Southern Ocean this month. From there, 25 to 30 instruments will be deployed each year for the next six years.

The entire project, known as the Southern Ocean Carbon and Climate Observations and Modeling program, is funded by the National Science Foundation, with support also coming from the National Oceanic and Atmospheric Administration and NASA.

Top image: UW’s profilers will monitor the ice-filled waters of the Southern Ocean, which can be dangerous for research vessels (Credit: Oscar Schofield/Rutgers University)