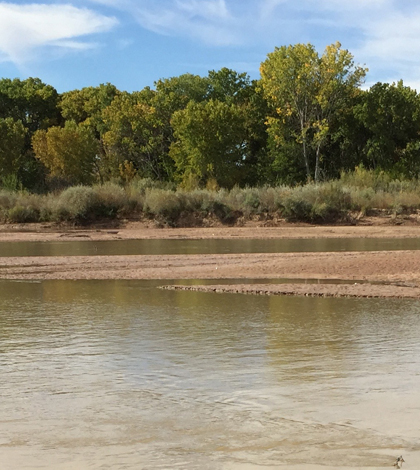 Over the past decade, some scientists studying streamflow in the New Mexico area have noticed an interesting relationship between data collected by various stream gages along and near the Rio Grande and the Pacific Decadal Oscillation (PDO), a prominent temperature pattern in the Pacific Ocean: Datasets for the two match up incredibly well over the past 100 years.

But despite this observed relationship, few researchers had done real quantitative work to dissect the possibilities it could present. That is until Mike Wallace got his hands on the datasets. When Wallace, a doctoral student at the University of New Mexico, began evaluating data from the Otowi stream gage on the Rio Grande near Santa Fe, New Mexico, he uncovered its potential in work that would eventually lead him to develop some of the most accurate streamflow forecasts ever seen.

Prior to his insight, Wallace was  working on a hydrology presentation about the Otowi gage that included spectral analysis on sediment flow. He was also researching ocean oscillation indices for his academic work. This led him to study in greater detail the underlying time signals in the Otowi gage record and compare those to the Pacific Decadal Oscillation. “I quantitatively demonstrated an amazing similarity,” he says.

“Because the correlation was so strong and there was a lag of about a year, I found I could forecast the streamflow. I went ahead in May of 2014 and published a forecast predicting what the 10-year trailing average streamflow rate (in cubic feet per second) would be at the Otowi gage by the end of 2014,” said Wallace, also principal of Michael Wallace and Associates, a forecasting startup that he runs from a University of New Mexico business incubator. “By the end of December, my forecast error for that site was proven to be about 2 percent.”

He admits that he was surprised with how accurate his forecasting approach turned out to be, noting that other forecasting methods out there don’t really come close. Most forecasts come in at an error of greater than 25 percent, he says, and it’s rare when their errors drop below 5 percent.

Conventional hydrologic forecasting relies on a few approaches. One looks at the historical streamflow at a site and bases predictions on how they’ve changed over time. Another approach, commonly used in the western U.S., depends on snowpack and forecasting its melt. Indices of the ocean pattern known as El Niño are also sometimes used. An adjunct to these methods often includes numerically-intensive deterministic modeling.

Wallace also looks at  El Niño in his streamflow predictions for the U.S. West. But he goes several steps in a new direction, anchoring his forecasts primarily to ocean drivers such as the PDO and the Atlantic Multi-decadal Oscillation, as well as El Niño.

Compared to the prevailing methodologies, Wallace says that his streamflow and temperature forecasts are less expensive and faster to produce, and also perform better in important contexts. He says that his customers, including land and resource managers as well as government agencies, appear to realize its value as a complement to the other forecasts that they rely upon.

Other forecasters have also taken notice. For example, the U.S. Department of Agriculture’s Natural Resources Conservation Service forecasts streamflow for many streams as part of its Snow Telemetry (SNOTEL) network. Staff from that agency have reached out to Wallace to learn more about the overlapping nature of his service. He has since produced a prediction for what the streamflow at several SNOTEL prediction point gages will be by the end of March and of June 2016. Wallace expects that his forecasts will add perspective and value for the forecasts that will eventually be produced by SNOTEL for that gage next spring.

“Our work is clearly complementary,” said Wallace. “Along with the different time averaging and forecasting spans that I utilize, these are some of the ways I’m filling in the gaps.”

In terms of climate change science, he notes that mainstream climate change forecasts are made very far out into the future, so his forecasts are perfect for filling in spaces between seasonal forecasts and those made for, say, 20- to 100-year periods. Wallace claims that, in any case, a 10-year forecast horizon has more practical applications, which are his focus.

“Ten-year planning horizons are common in many fields, including the fields within my target markets,” said Wallace. Wallace uses a number of different tools in creating the streamflow forecasts, among them Matlab (related more to his research), Surfer, some object-oriented languages and Microsoft Excel. And there are several well-known methodologies he relies on, including principal components analysis; lag evaluations of the principle components; spectral analysis of time-series products; regression calculations; and conditional probabilities.

At present, he publishes streamflow forecasts for 14 streams across the western U.S.

“I have most errors under 10 percent,” said Wallace. “I forecast a 10-year trailing average and so the result is highly smoothed. It doesn’t forecast specific flood events or drought events and has to be used with caution by field or resource managers. But as professionals, they understand that I’m not forecasting a flood in the spring for example.”

There may be a potential to expand into many additional markets. He envisions that irrigation districts and flood control districts will find them useful, along with hydrologists throughout the industry such as in stormwater design and hydropower. Outdoor recreation destinations, like ski resorts, or even commodities traders could rely on them as well. He believes his complement of forecasting products will add value to general construction, planning and agricultural needs, simply by virtue of the close connections between streamflow and the precipitation that recharges it.

“I believe the (10-year trailing average) product we publish does not need much tweaking. But we are already expanding into new forecasting subscription, training and consultation products,” said Wallace. “This is yet another brave new world — I don’t think anybody anticipated the high-fidelity forecasts that can be developed. I believe that for a long time to come, new related techniques and applications will be deployed.”

For example, from his current base of streamflow forecasting products, Wallace is also branching out into temperature forecasting by working with Petr Chylek, an atmospheric scientist at the Los Alamos National Laboratory, who has helped to uncover a relationship between the Atlantic Multidecadal Oscillation and temperatures in the U.S. Southwest.

Finally, Wallace states that he is developing insights through his research on solar correlations to hydroclimatology that show potential to forecast several years into the future using shorter trailing averages. He says that better hydroclimatologic forecasting, further into the future and for many locales, appears to be on our collective horizon.