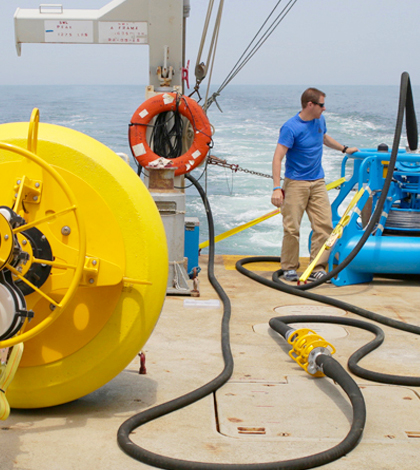 Baleen whales are threatened around the world. This is due to a number of factors, including large ships sometimes hitting them, noise pollution that can alter their behavior and fishing nets that unintentionally, or at times purposefully, snag them. But luckily there are groups working to reverse this trend, like a few scientists at Woods Hole Oceanographic Institution who have recently launched an acoustic buoy offshore of New York City.

The buoy is deployed not far from Fire Island, a barrier island that runs parallel to the south shore of Long Island, N.Y. Part of its placement there was to spur interest, project managers say, as part of better protecting whales is simply getting more folks aware of the dangers the massive mammals encounter.

But investigating along the East Coast is vital for another reason, as one type of baleen whale with the most drastically low population numbers, North American right whales, depend on the region to breed.

“There are only 500. Imagine if there were only 500 people left,” said Mark Baumgartner, associate scientist at Woods Hole. He says that right whales migrate from offshore areas near Maine every year to regions near the Carolinas, Florida and Georgia to give birth. In February and March, they migrate back north. “They live right in our backyard, along the East Coast. They pass by everyone at some point. If we can prevent one or two deaths each year, it would really help populations that have been decimated. Over time, that adds up.” Technology developed at Woods Hole Oceanographic Institution will give researchers and the general public the ability to listen for the presence of whales including endangered species in the waters of the New York Bight in real time. (Credit: Wildlife Conservation Society)

Baumgartner has developed special software that can interpret sounds from right whales passing near the buoy. Other baleen whales currently tracked include humpback, fin and sei whales, which can also be sorted and automatically processed from sounds into data points.

The information feeding the software is relayed from a hydrophone deployed on a frame at the bottom of the ocean through stretch hoses connected to a data logger within the buoy. These hoses contain helically wound conduit that send info back and forth between the two devices.

Every two hours, data from the hydrophone get beamed back to scientists in Baumgartner’s lab via satellite. These are processed by another computer onsite, and then reviewed further by a trained analyst who determines whether or not the data actually showed a whale or not.

“It also has a library of known calls in the software and so it makes its own guess. It’s not sending back audio, but information about sounds,” said Baumgartner. “That info, aside from classifying, condenses it down into what are very similar to music notes. We call them ‘pitch tracks’ and they allow us to get a really good understanding for what species are present.” So far, there have been numerous detections of fin whales by the buoy. To see those detections, which took place in real time, visit robots4whales.com. Fin whales make really low-frequency noises, Baumgartner says, like those only achievable by high-tech, surround-sound systems in upscale movie theaters. Humpback whales are also known to occur in the area and he’s hopeful that some sei whales will be detected, as well as right whales in the spring.

The data, in addition to being posted online, may one day be shared with mariners who use the Whale Alert app. It is designed so that they can keep up on where whales have been detected and then hopefully steer clear of those waters. The U.S. government is also looking to consolidate a lot of data collection already going on in the northeast coastal region, and so the data may also be shared with the Northeastern Regional Association of Coastal Ocean Observing Systems.

“For a number of whale populations, fishing gear mortality and ship strikes are happening at unacceptable rates,” said Baumgartner. “How will the buoy help? First of all, we need to educate people about the plight of these animals. We also need to share data with stakeholders. … Down the road, we can use the info to be dynamic. We could use detection to let ships know you may want to slow your speed or do something to limit impact.”