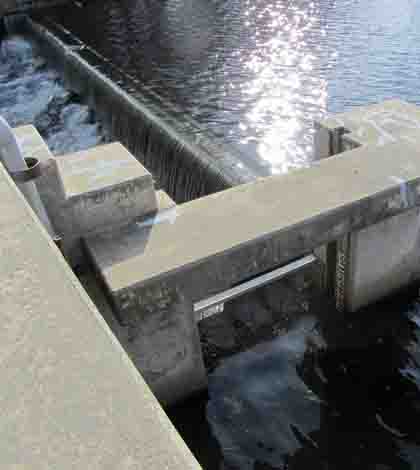 The Coursey Pond outfall on the Murderkill River in Delaware, the likely deployment site of one of the NEWRnet water quality sensor stations (Credit Scott Andres)

A recently funded plan to build an advanced water quality sensor network across three Northeastern states will do more than make sure cutting-edge equipment makes it into the region’s waterways. The project also boasts a social science aspect that will help integrate the data into resource management decisions.

A $6 million National Science Foundation grant split between Vermont, Rhode Island and Delaware will fund the infrastructure of the North East Water Resources Network, or NEWRnet. The project planners are still weighing the options for which sensor platforms they’ll be installing across more than a dozen sites, but priority parameters include nitrate and organic carbon.

The funds will also support work that will study how the data can help inform everyday decisions on pressing water management applications. In addition to the standard natural scientist investigators behind the sensor network, the team also includes environmental economists, experimental economists and modelers that build computer programs to simulate decision-making processes in a gaming type environment.

That means that the network won’t just enable research into environmental questions like how the regions rivers, reservoirs and estuaries will respond to long-term effects of climate change. The project will pursue lines of questioning like: How would land use managers change their decisions given new sensor data? Or, how would a regulator make a decision on a permit based on access to sensor data?

That sort of social approach is a welcome change for Scott Andres, a senior scientist with the Delaware Geological Survey and one of more than 20 investigators on the NEWRnet project.

“This is what was interesting to me, because I’ve worked with policy and regulatory people for much of my career, trying to get them to use the science I do in their decision making process,” Andres said. “And that’s exactly the goal of this particular program.”

The social science aspect of this project is encouraged by the National Science Foundation’s Experimental Program to Stimulate Competitive Research, or EPSCoR. The EPSCoR program, which awarded the grant for the sensor network and associated work, funds research and infrastructure at lower-profile schools do defray the concentration of academic capital at top-tier research institutions.

“Weather or climate cycles have a gradient, and so we’ll be trying to set up experiments that are comparable in design so that we can compare the water quality results across the three states,” he said.

Vermont will benefit from additional water quality data in the Lake Champlain basin, where nutrients are a big concern. Rhode Island will gain five sensor stations on streams that drain into Narragansett Bay.

One of Delaware’s three stations will go to the intake of a water utility, where Andres said the hope is the data will help plant operators fine-tune the treatment process.

“Right now they’re just monitoring turbidity,” he said. “If we added dissolved organic carbon and nitrate to their sensor array, that changes dramatically what chemicals they put into the water for treatment.”

That’s an example of the project’s focus on benefiting resource managers, not just research scientists. But that effort will amount to more than feeding raw data to regulators and policy makers and hoping they’ll use it. Investigators will work with those user groups to learn the best ways to process, interpret and visualize the data to make it more palatable than, say, the current parts per million of nitrate in a nearby stream.

“They want to know more than just the concentration in the stream. They want to know, Should we shut down the treatment plant? Or, Do we need to buy more riparian buffer zone lands?” Andres said. “At the natural science end we have to distill our advice down to something that’s more amenable to those kinds of decisions.”

Top image: The Coursey Pond outfall on the Murderkill River in Delaware, the likely deployment site of one of the NEWRnet water quality sensor stations (Credit: Scott Andres)