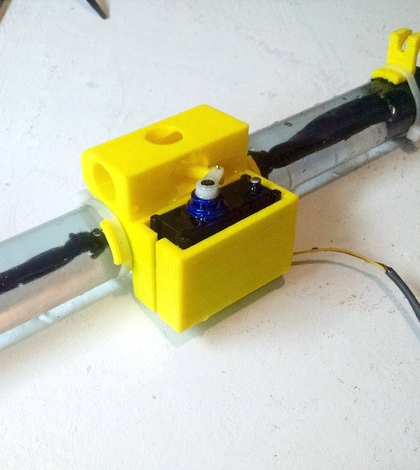 The Niskin3D Water Sampler is making it easier for pretty much anyone to collect data on the world’s oceans. All that’s needed is a 3D printer and about $70 in parts.

The open-source niskin bottle was designed by the folks spearheading Oceanography for Everyone, an effort that aims to build a community of individuals interested in advancing ocean science. One of their first forays into the realm of custom-built marine science tools was the OpenCTD, which has been refined since its inception into an accurate sensor for citizen science. In follow-up coverage to this piece, the Environmental Monitor will feature how far it’s progressed.

The Niskin3D has the same goals of advancing marine science and building a community of people to collect more data. But it began as more of a project to help its developers learn about 3D printing, an important ability for making things on your own these days.

“It’s actually pretty complex,” said Andrew Thaler, a visiting scientist at the Virginia Institute of Marine Science who developed the Niskin3D with Kersey Sturdivant, McCurdy Visiting Scholar at Duke University’s Nicholas School of the Environment. “We were also working closely with the OpenROV (remotely operated vehicle) folks, who were interested in making a payload that can be hardwired into the ROV and used remotely. So we wanted to learn about 3D printing for oceanography, but also to build something integrated with technology on the market.”

He and Sturdivant were successful, and have made it so that the Niskin3D can be easily carried underneath an OpenROV, affixed to its payload bay. When the ROV is at the desired depth, the water sampler can be remotely triggered to slam shut. Niskin 3D Water Sampler next to an OpenROV. (Credit: Andrew Thaler / Oceanography for Everyone)

The design they came up with is posted on GitHub for easy access by all. Anyone looking to build their own 500-milliliter Niskin3D Water Sampler, including citizen scientists, can find simple, easy-to-follow build instructions and a list of materials needed to get going.

Most of the parts required can be purchased on Amazon’s web store, while all the items that need printed are already laid out in a downloadable file for use with 3D printers. The cost to manufacture the parts through 3D printing is only around a few pennies. The most expensive part is the servo, Thaler says.

It is essentially the mechanism that slams the bottle’s caps closed when it reaches the right depth. The Niskin3D he built uses a commercial waterproof servo, which costs somewhere around $60. The total price tag is far below that of commercial Niskin samplers that can cost more than $400 for a 1-liter bottle.

Thaler says that the Niskin3D has been used in numerous efforts, including a deployment he and Sturdivant completed on freshwater Lake Superior that sampled down to 140 meters. Water collection went off without a hitch. Some professors at Polk State College have also used it in classes.

“They had engineering students building robots, high school students shooting film and environmental science students designing projects to use it,” said Thaler. Joey Maier, professor of biology at the college, is heading things up. “Their plan is to go out and monitor sewage outfalls, where you wouldn’t want to send a diver.”