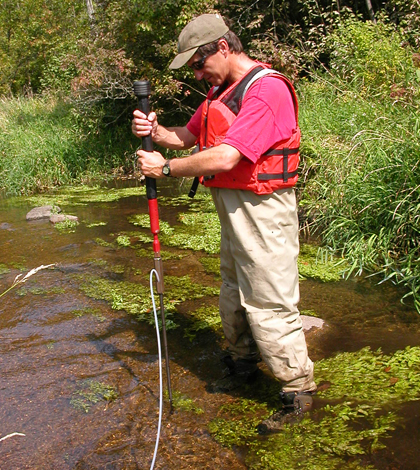 Nitrate levels in some streams primarily fed by groundwater may take decades to respond to land-based efforts to control the potentially harmful nutrient, according to a recent study from the U.S. Geological Survey.

Nitrate applied to agricultural land as fertilizer often finds its way to streams and their receiving waters where it can degrade water quality and be harmful to aquatic life.

While rain can wash nitrate off of fields and directly into streams through over-land flow, the nutrient can also infiltrate slow-moving groundwater that seeps into rivers through the streambed. Nitrate that takes this route may not make it into a stream until years after it was initially applied to the landscape.

This slower pathway has recently been suggested as the reason that some efforts to reduce or control applications of nitrogen-based fertilizers haven’t been met with a corresponding drop in nitrate levels in nearby streams. To get a better handle on what kinds of streams might be more vulnerable to the groundwater route, USGS scientists measured nitrate concentrations in streams and surrounding groundwater at seven sites across the U.S. The results were recently published in the journal Environmental Science and Technology.

At each study site, the researchers used stream gauge data to determine what portion of a stream’s flow came from groundwater versus surface runoff. Nitrate concentrations were measured in groundwater, surface water and streambed pore water. Streambed water samples were collected with stainless-steel drive point piezometers.

By combining streamflow data with monthly nitrate measurements and other analyses, the researchers calculated what portion of the nitrate in each stream was carried there through groundwater. Sandy Run in North Carolina, one of the seven study streams, is a watershed where water and nitrate flow from fields to streams primarily through quick flow paths such as overland flow and tile drains (Credit: USGS)

Perhaps the most impressive finding from the research comes from a detailed analysis of a stretch of the Tomorrow River, a study site in Central Wisconsin where both streamflow and nitrate are primarily derived from groundwater.

In an effort to more closely calculate how much groundwater enters this length of the stream, the researchers conducted a tracer study along a 1,200 meter reach. The method involves injecting a chemical tracer into the top of the reach at known concentrations. As the tracer flows downstream and more groundwater enters the channel, the tracer is diluted. By looking at the drop in tracer concentrations, the researchers can calculate how much groundwater came into the stream.

The tracer study was coupled with more piezometer sampling of nitrate concentrations along the reach. Those samples were also age-dated, which showed that the average age of the groundwater entering around the stream was around 27 years.

That means that steps taken today to control nitrate in the Tomorrow River’s watershed likely won’t reveal their full effects on stream concentrations for another three decades.

“In a case like this one, you basically have a reservoir of nitrate already in the aquifer that is going to continue to discharge to the stream,” Tesoriero said.

But that certainly isn’t a reason not to try and reduce excess nitrate applications on land, he said.

“It will have an effect, it’s just a matter of the time it will take to fully see it.”