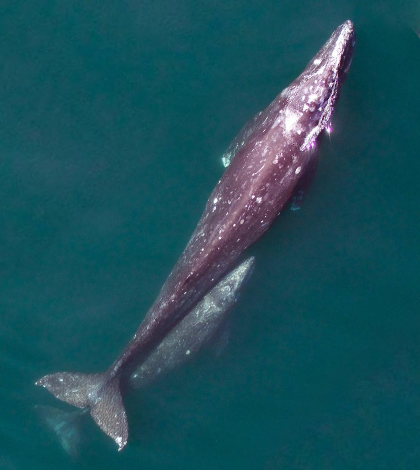 A gray whale and her calf migrate north along the California coast. (Credit: NOAA)

The list of practical applications for unmanned aerial vehicles seems to be growing by the day. Last spring, the National Oceanic and Atmospheric Administration added whale-watching to that list.

NOAA Fisheries scientists John Durban and Holly Fearnbach piloted hexacopters off the coast of Baja California, Mexico, to study gray whales migrating from their nearby calving grounds to their Arctic feeding grounds, according to a NOAA press release.

NOAA Fisheries has sent scientists to the same spot nearly every other year for the past 22 years, but until this year, they’ve been equipped with binoculars instead of drones. The visual survey attempts to count the number of gray whale calves born each breeding season, while also estimating the whale cows’ length and girth.

A fat gray whale cow is good news for its calf, as the mothers eat very little during their migration — which may last several months and cover up to 20,000 kilometers — but still must nurse their young. A thick layer of blubber provides the energy needed to nurse over the course of the journey.

Using a mounted camera and a pressure altimeter to determine the drone’s exact altitude, Durban and Fearnbach were able to calculate the size of each whale within a matter of centimeters.

They piloted the hexacopter at a minimum distance of 120 feet above the whales to avoid disturbing their behavior. Drones have proven to be an effective way to non-invasively monitor all manner of aquatic and terrestrial organisms in recent years.

This year, the scientists are also employing an array of three thermal imaging cameras to automatically capture images of the whales as they surface around the clock.

“A whale is this great big motor that takes in a breath of air and holds it inside for a long time,” said NOAA Fisheries Researcher Wayne Perryman, in a press release. “When it exhales, the air is much warmer than the background, and we can detect that difference very easily, both day and night.”

Commercial and aboriginal whaling damaged gray whale populations throughout the 19th and 20th centuries, until commercial efforts ended in 1946. In 1973, gray whales were labeled endangered under the U.S. Endangered Species Act.

Top image: A gray whale and her calf migrate north along the California coast. (Credit: NOAA)