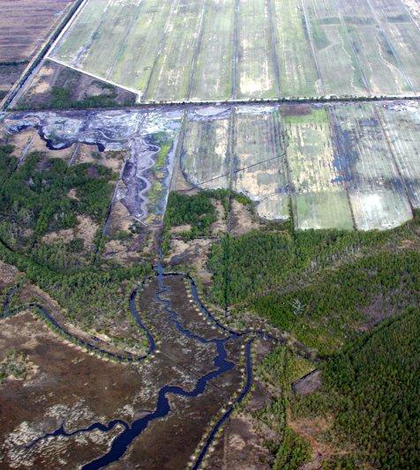 North River Farms, a 6,000-acre swath of former wetlands on the North Carolina coast drained in the 1970s for agricultural production, was a coastal conservancy and ecological engineer’s dream.

First, the land lay right between a sensitive estuary important for shellfishing and one of these largest row crop production facilities east of the Mississippi. Second, the landowner was ready to let go of the farm and see it restored back to a natural state.

“I guess the stars just aligned correctly,” said Michael Burchell, associate professor in the Department of Biological and Agricultural Engineering at North Carolina State University. “That doesn’t happen very often because farmland is a prized possession in most places, especially if goes from generation to generation. Many people hold on to those lands just for the sake of holding on to their heritage.”

Burchell helped design a sweeping restoration of hardwood wetlands and a tidal marsh on the property after the North Carolina Coastal Foundation acquired the land. The farm’s potential as a buffer between the North River Estuary and an intensely cultivated watershed made the project particularly attractive.

“The reason we undertook was not simply because we wanted to restore wetlands, but because of it’s strategic position in the landscape,” said Todd Miller, the foundation’s executive director. “It’s right in the headwaters of a number of tidal creeks and extremely valuable fishery areas.”

Since 2002, restoration activities at North River Farms have reshaped and replanted the landscape in configurations that slow down and hold back runoff. By reestablishing wetland hydrology in the area they’ve reestablished the land’s ability capture nutrients as they runoff from upstream agricultural operations.

“Drainage systems are designed to get the water off and out as fast as possible,” Burchell said. “These transformations that occur in wetlands that are so magical, they only happen when he water cans tay in there for some amount of time.” In addition to the benefits water quality and habitat benefits brought on by the project, the area has also served as a living laboratory for wetland restoration research. Scientists and graduate students have measured flows, water levels and nutrients for years in the restored wetlands, providing hard data on the benefits of some restoration techniques over others.

They also developed some inventive monitoring techniques along the way. After a year of using automated samplers to collect a once-a-day snapshot of nutrient levels upstream and downstream of the restored wetlands, Burchell said they realized that wasn’t going to be enough to give them a clear picture of how much nitrogen or phosphorous was being removed by the ecosystem.

To get more frequent measurements, they acquired recently developed optical instruments that calculate nitrate, dissolved organic carbon and turbidity levels by shining a light into the water and analyzing which parts of the spectrum are absorbed.

They also developed their own local algorithms to process the absorbance data to calculate levels of organic nitrogen, phosphate and salinity — parameters that go beyond the manufacturer’s advertised abilities for the sensors, according to Francois Brigand, assistant professor of biological and agricultural engineering at North Carolina State University.

“We now all of a sudden have access to an enormous amount of data that we didn’t have access to before,” Brigand said. “To me, it’s really a revolutionary thing.” After 20 months of data collection — much of it spearheaded by graduate student and National Science Foundation Fellow Randall Etheridge — the results show that the restored tidal marsh has removed around 9 percent of the nitrogen from agricultural runoff before it flows out to the North River Estuary.

Burchell said they had hoped to see remove closer to 30 percent, and that might have been possible if they had designed the restoration with more features to promote nitrogen removal. But the scientists weren’t just trying to build the most efficient nutrient filter possible. They were restoring an ecosystem balance nutrient processes with other natural dynamics like fish habitat.

Burchell said the results suggest that scientists and land managers have sometimes overestimated the abilities of wetlands to prevent damage to aquatic ecosystems from agricultural wetlands.

“It drives home the fact that more needs to be done in the watersheds themselves to mitigate some of these nutrient losses,” Burchell said. “And I think many agricultural lands are starting to do that now.”