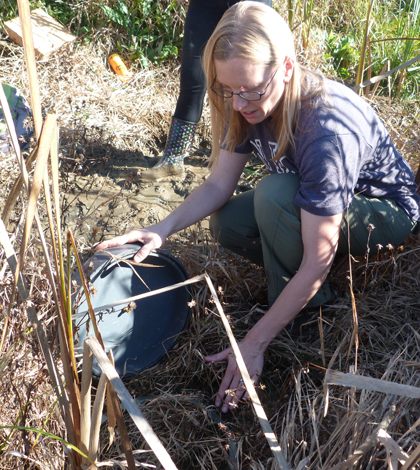 Green infrastructure installations, like green roofs, permeable parking lots or bioswales, are increasingly popular these days. They are built for good reasons, like decreasing urban runoff or improving a stream’s water quality, among other things. But as with anything, there are tradeoffs to implementing them.

A study led by scientists at Northern Kentucky University is evaluating some of the costs and benefits to using one type of green infrastructure in a study considering constructed wetland sites in Kenton County, Kentucky. The research, led by Sarah Stryffeler, an undergraduate student studying environmental science, has looked at multiple sites using gas-catching chambers that have given scientists the means to analyze the greenhouse gases emitted by the manmade wetlands.

The Environmental Monitor caught up with the NKU team while they visited one of the wetland sites, in the middle of Cappel Park near Covington, Kentucky. The constructed wetland there is used as a filter to help clean water that flows into a tributary of the Licking River, which later empties into the Ohio River.

“That’s what this site is, and so, in an urban area, people are putting in wetlands and rain gardens and retention ponds and all these different things to deal with stormwater runoff. And we know that they’re really beneficial in improving water quality, but nobody’s looking at what some of those tradeoffs might be,” said Kristy Hopfensperger, associate professor and director of the environmental science program at NKU. “So if we put in a bunch of wetlands, yes, we know we can improve water quality, but are we throwing more methane into the air of an urban environment. So what might tradeoffs of the green infrastructure be?” Sarah Stryffeler gathers a sample from a gas-catching chamber using a syringe. A glass thermometer near the front of the chamber measures soil temperature. (Credit: Daniel Kelly / Fondriest Environmental)

Methane is just one of the greenhouse gases that is being considered in the study. The other two are carbon dioxide and nitrous oxide. These are evaluated using chambers that segment small portions of wetland and capture the gases they emit. The circular gas-catching chambers don’t have bottoms so their walls can be shoved into the dirt to create the study plots. Each features a special construction to ensure a gas-tight seal.

The researchers take the chambers to every site, deploy them, and then collect samples of the gases emitted via syringes that insert into the lids. Samples are gathered every 10 minutes for a half hour during each deployment. From that point, they are analyzed using a gas chromatograph.

“Soil moisture is used as a proxy for letting us know if the system is aerobic or anaerobic. So if there’s no oxygen in the soil, if it’s an anaerobic situation, then you’re going to have really high soil moisture,” said Hopfensperger. “There’s going to be a lot of water in the soil pore space instead of oxygen.”

Temperature is useful for gauging microbial activity, she says, because greenhouse gas fluctuation can increase as conditions get warmer. Organic matter is a metric that helps answer decomposition questions.

Soil temperature is tracked with a regular glass thermometer that can be stuck in the muck. For moisture, researchers use a two-pronged soil sensor.

“We need it (the soil sensor) to be kind of level with the chambers so that we know that they have the same moisture content,” said Stryffeler, as she took stuck the soil probe into the dirt near a gas-catching chamber. “And then, this is super easy, all that you do is press ‘on’ and then it just tells you what your reading is.”

Those measurements have helped the scientists make some interesting finds about the wetland we visited, as well as some of the others under study. View of the constructed wetland site at Cappel Park near Covington, Kentucky. Closeby are baseball fields, soccer fields and outlets for a creek that flows into the Licking River. (Credit: Daniel Kelly / Fondriest Environmental)

“This site is our most natural-looking, with thick vegetation. And we have the highest CO2 rates here, which makes sense because you’re going to get a lot of respiration from the plants,” said Hopfensperger. Another site, a retention basin, was found to be sequestering methane. All of the sites, except for one that was barely sequestering nitrous oxide, were found to emit nitrous oxide. “Our ranges are within (those of) the natural (not manmade) systems, but they’re lower. So far, we’re finding that these ecosystems are not emitting as much greenhouse gases as some of the natural systems might be.”

Hopfensperger says that the the lower rates might be due to the fact that there’s less organic matter in the constructed wetlands than compared to natural sites that have been in existence much longer.

Still more data need to be collected, she says. And one thing that would really help the effort is to do a mass-balance of gases emitted across sites.

“So with an ecosystem, you can say, ‘Hey, this ecosystem’s emitting methane, but at the same time, all this vegetation’s taking CO2 out of the atmosphere.’ So you have to kind of balance that,” said Hopfensperger. “You can say emitting methane is bad. We know it’s a harmful greenhouse gas, but maybe the wetland takes in so much more CO2 that it offsets it and it’s not really a big deal. So right now we’re just gathering the data on the greenhouse gas rates. And that would be the next step to kind of calculate those mass balances.”

Moving forward, Hopfensperger is hoping to use data collected during the project, which began in June 2015, in funding proposals that could lead to larger studies into the tradeoffs that green infrastructure projects present. For Stryffeler, the work so far has helped get her feet wet in studying environmental science.

“I’m hoping to go into environmental engineering eventually. That’s the dream,” said Stryffeler. “Renewable energy or oceans cleanup. So this is my experiment of ‘is this really what I want to do for the rest of my life.’”