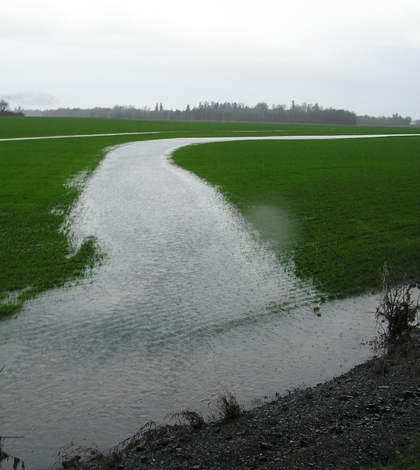 When the ice dams holding back prehistoric Glacial Lake Missoula broke during the last ice age, colossal volumes of water washed over Eastern Washington and into Oregon, depositing fertile soil across what would become the richly agricultural Willamette Valley.

The geological history that makes the valley ideal for farming also makes it distinct from systems in the Eastern United States like the Mississippi River and Chesapeake Bay. Yet those eastern systems have produced most of the research on how agriculture affects water quality.

A research collaboration by federal agencies and Oregon State University is working to better understand how nutrients move between the land and the Calapooia River, a tributary of the Willamette River. Their findings are backing new recommendations for how farmers can keep nutrients on the fields and out of the water.

“Because of this very unique soil and geology in the Calapooia and Willamette basins, we thought it was worth exploring similar questions to what folks had done in the East,” said Daniel Evans, who participated in the research as a graduate student at Oregon State. He’s now a research associate with the Virginia Tech crop and soil environmental sciences department.

“We found that there were some differences in the way that nutrients move around and how you would manage under the conditions that are in those systems,” he said.

The Calapooia River rises in the Cascade Mountains at around 4,500 feet amongst mixed old growth forest managed by the U.S. Forest Service for multiple uses. Its middle reaches continue down the mountain through heavily managed timber forests. The lower portion flattens out to meet the Willamette Valley plain and flows through an agricultural region dominated by grass seed production. Looking down over the Calapooia’s forested headwaters with the forest management visible (Credit: Daniel Evans)

The results of one segment of the research collaborative’s efforts were recently published in the journal Environmental Monitoring and Assessment. The study, led by Evans, analyzed nutrient concentrations at 31 sites along the Calapooia main stem and 44 sub-basin sites at the outlets of tributary streams over the course of three years.

Nitrogen concentrations were low in the upper regions, which Evans said was expected. Timber operations can produces fluxes of nitrogen through harvests and fertilization, but it didn’t appear that the timber companies had fertilized during the study period. The nutrient-poor soils on the slopes also help capture nitrogen before it runs off into the streams.

“It makes good sense because generally the soils up in the Cascades are pretty rocky,” Evans said. “There’s just not a lot of nitrogen naturally in that system, so the vegetation is working very hard to pull any nitrogen it can out of the soil.”

The lower reaches, however, harbored much higher concentrations, especially in the tributaries. That’s likely a result of both the agricultural land use and the poorly drained glacial soils in the valley plain. Evans said they found strong correlations and associations with agriculture and higher nitrogen concentrations, but it’s difficult to declare a cause-and-effect relationship. The farming takes place on the well-sorted sediments of a former lakebed formed by the Missoula floods, and that sort of soil doesn’t allow water to infiltrate. Instead, the water tends to stay on the surface, which expedites its course to the streams.

“And so if you didn’t have those flats, maybe it would be different,” Evans said. “If the agriculture was there but the soil type was different, you’d likely have a different result.” Another segment of the research found that the water’s tendency to stay on the surface limits the effectiveness of riparian buffers, a vegetated strip along rivers considered a best management practice for cutting polluted runoff in the East. Instead of infiltrating the soil where the plants can suck up the nutrient-laden water, the runoff blows right past the buffer and enters the stream. In some cases, they found the buffers were even a source of nitrogen.

The nutrient study also found a seasonal pattern that differed from other areas of the country. Oregon typically sees a four to five month drought period in the summer that is broken by fall rains. Those rains brought a spike in concentrations by collecting the mineralized nitrogen that had collected on land over the summer and conveying them quickly into streams.

That sort of insight is what led the U.S. Department of Agricultural Research Service (along with Oregon State’s Forest Research Laboratory Fish and Wildlife Habitat in Managed Forests Research Program) to fund the research in the first place. With data in hand that shows river nutrient levels spike in the fall, the ARS can confidently advise farmers not to fertilize until spring.

“They need to have this baseline research before they stick their neck out and make a recommendation,” Evans said. “If it’s going to produce the same amount of grass seed and you waste less fertilizer, than we should be doing that. It’s a no brainer”