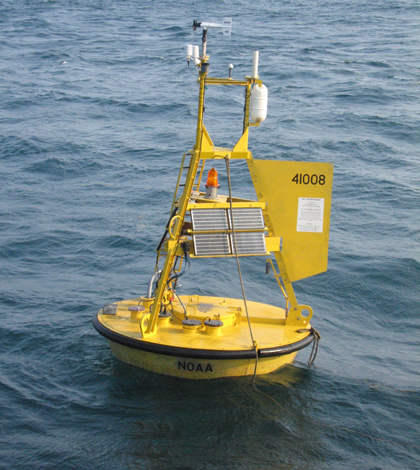 A PMEL buoy moored off the Georgia cost equipped with the MAPCO2 monitoring system (Credit: NOAA)

The world’s oceans are becoming increasingly acidic, threatening not only countless marine organisms but also the livelihoods of millions of people in the fishing industry. Over 36,000 commercial fishing vessels operate out of the U.S. alone, many of which trawl the Pacific for salmon, herring and shellfish.

The Pacific Marine Environmental Laboratory, a research branch of the National Oceanic and Atmospheric Administration, is hoping to expand their network of long-term monitoring buoys to better meet the challenges posed by ocean acidification.

“While the ocean is always a challenging place for a buoy, the recession has been a recent challenge for the science community as well,” said Adrienne Sutton, a lead scientist in PMEL’s carbon group. “However, through the hard work of our partners at NOAA and our academic colleagues, we’ve been able to keep the buoy network intact.”

But intact might not be good enough. Shellfish larvae and juvenile fish are already feeling the effects of acidifying waters. In Washington state, for example, Taylor Shellfish Farms blames acidification for a 75 percent loss in hatchery productivity from 2007 to 2009.

The current buoy network was established in 2004 as part of the Global Ocean Observing System. It consists of 38 moorings that let PMEL and NOAA scientists monitor important marine and atmospheric parameters with a Moored Autonomous pCO2, or MAPCO2 system.

“These long-term, sustained ocean CO2 observatories track ocean carbon uptake and ocean acidification in the midst of the large natural variability in the marine environment,” Sutton said. “They provide a record of past and current behavior of the ocean carbon system and are critical to predicting its future.” A MAPCO2-equipped buoy of the coast of Alaska, where it monitors ocean acidification. (Credit: Jeremy Mathis)

A subset of the buoys “also measure pH, dissolved oxygen, fluorescence and turbidity,” she said.

PMEL is working with policy makers to secure support for more buoys as part of a proposed national strategy to combat acidification. But in the meantime, NOAA has created a website that offers tips on lowering acidification one person at a time.