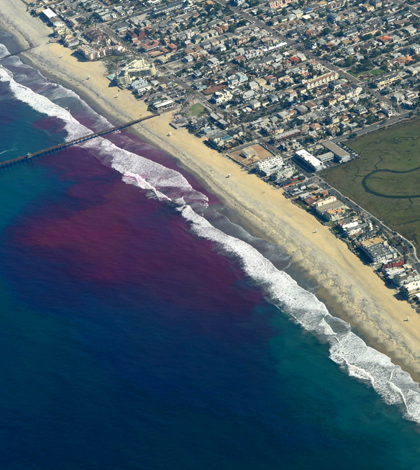 The dye’s evolution as of roughly 8 a.m. Pacific Daylight Time on the first day of the release. It initially traveled northward within the surf zone, but behaved quite unexpectedly as time progressed. (Credit: Stephen Holloman and Nick Statom / Scripps Institution of Oceanography)

With most of the U.S. population concentrated along the coasts, scientists are keen on finding out how pollutants and other contaminants travel around waters near beachfronts. Researchers at Scripps Institution of Oceanography have been working at the forefront of this question for some time, completing investigations like the Imperial Beach Pollutant Transport and Dilution Experiment that wrapped up in 2009.

To build on that project’s success and expand on the knowledge of contaminant movement in beach waters, scientists at Scripps are embarking on another study. It is currently underway along Imperial Beach, a stretch of land shared by Coronado, California and Tijuana, Mexico. Accordingly, institutions from Mexico are partnering in the work, as is the Jacobs School of Engineering at the University of California, San Diego. The U.S. Navy, which has a base nearby, is cooperating with researchers to let them sample in its territory.

Data collection began at the end of September and is aiming to wrap up in mid-October. Scientists are mostly relying on the movements of rhodamine dye in the nearshore area, which they are tracking using fluorometers and other instruments. Some of those are mounted to jet skis, letting researchers gather data while they speed around on breaking waves.

“The U.S. population is concentrated at the coasts. Despite the importance of clean coastal waters to our economy and well-being, declining water quality from pollutants, such as sewage, entering the ocean threatens coastal ecosystems and human health,” said Falk Feddersen, a professor at Scripps and a leader of the Cross Surfzone / Inner-shelf Dye Exchange (CSIDE) project, in a statement. “By tracking dye released both north and south of the border, we can understand the rate of pollutant transport along the coast, how it dilutes, and learn how to develop accurate models for when it will be okay or not to go in the ocean — similar to weather models.” The dye’s movement will be tracked using the jet ski-mounted fluorometers at the shoreline while other ship-mounted fluorometers will assist in gathering dye fluorescence measurements. The investigation will also utilize data gathered by hyper-spectral sensors on a research plane that is making flights over Imperial Beach’s shifting waves.

In addition, an autonomous underwater vehicle provided by experts at the engineering school will bob up and down in the water column to more thoroughly map how the dye moves. It will gather information important for figuring out how the rhodamine disperses outside of the surf zone. And its data will help scientists examine the makeup of large-scale eddies in the area that are formed by rip currents.

“The hypothesis is that these eddies play an important role in the exchange of water between the nearshore region and the shelf,” said Geno Pawlak, professor of mechanical engineering at UC San Diego, in the statement. “Their longevity and structure can influence transport to and from the shore of nutrients and biology but also potentially pollutants and pathogens.”

Those types of measurements help inform a globally significant investigation, say other scientists involved with the effort.

“This work applies broadly to coastlines around the world and has local relevance to the water quality problems experienced in the San Diego Bight,” said Sarah Giddings, an assistant professor at Scripps and co-leader of the CSIDE project, in the release. “We have developed a binational team of scientists because coastal water quality is not a national issue. Water currents, waves and watersheds do not follow borders and thus neither do the things carried by the water. This work applies not just to water quality but to transport of other water-borne constituents such as sediment and fish larvae.”

Top image: The dye’s evolution as of roughly 8 a.m. Pacific Daylight Time on the first day of the release. It initially traveled northward within the surf zone, but behaved quite unexpectedly as time progressed. (Credit: Stephen Holloman and Nick Statom / Scripps Institution of Oceanography)