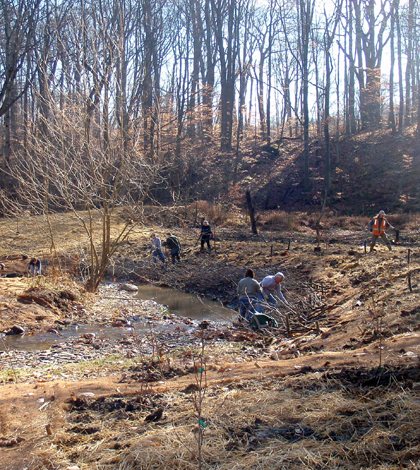 Ohio is home to a genetically distinct strain of brook trout, a cold-loving species that the state lists as threatened. Northeast Ohio is on the fringe of the species’ distribution and will likely never be abundant there, but scientists and volunteers behind a data-driven, watershed-scale restoration effort in the region hope their work could one day lend these fish a few more miles of stream in which to swim.

The Chagrin River, a Lake Erie tributary that runs through Cleveland’s suburbs, is a coldwater stream with a watershed that supports brook trout in some stretches. One of the Chagrin’s tributaries, Sulphur Springs Creek, is also classified as coldwater habitat, but that designation seems to be slipping.

“With a lot of the anthropomorphic changes in the subwatershed, it’s getting nudged closer and closer to warm water, mainly due to changes in hydrology–stormwater inputs and things like that,” said Mike Durkalec, aquatic biologist with Cleveland Metroparks.

Though some of Sulphur Springs’ headwater capillaries reach into suburban backyards and similar landscapes, most of the stream’s north, south and main branches flow through land protected by the Metroparks system. That put the agency in prime position to partner with Chagrin River Watershed Partners and the Emerald Neckalce chapter of Trout Unlimited on a $46,000 U.S. Fish and Wildlife Service grant to monitor and restore the stream.

Since 2011, Metroparks has monitored flow and temperature at six strategic locations with ISCO flow meters HOBO temperature loggers. The data will help set a baseline for the stream, as well as help track benefits of an in-stream restoration project conducted in 2012. Installing temperature sensors that will help show whether the stream is suitable for Ohio brook trout (Credit: Cleveland Metroparks)

The restored site was a former impoundment that was installed in the 1930s and failed within the next few decades. Before the project, the area around the stream was wide open, lacking the forested riparian buffer that protected the water upstream and downstream. Extra sunlight on the water was warming the stream and promoting attached algae growth. The channel was also entrenched and still held some of the structural components of the dam.

The project restored 400 feet of the stream, returning the channel to a more natural state and revegetating the banks with trees to provide shade once mature.

It’s too soon for the monitoring data to show much an improvement, Durkalec said. But the sensor network is also helping Metroparks identify other hotspots of warming and flashiness that could serve as potential targets for restoration.

“We’re certainly not under the illusion that 400 feet of stream is going to make a huge impact and save the whole stream,” he said. “Like any watershed-based project, we’re looking at it as a piece of a puzzle.” Meanwhile, the baseline data show that the stream is a few degrees above the 16-18 degrees Celsius threshold where brook trout are likely to survive. If their work can’t bring the stream to within reasonable expectations for brook trout, they’ll also consider introducing other less glamorous but still declining native species like redside dace.

But bringing the temperatures down is still within reason, Durkalec said, and reintroducing Ohio’s genetically unique brook trout would be an important step in preserving the state’s biological heritage.

“The cherry on the sundae would be to eventually be able to reintroduce Ohio brook trout to this stream,” he said. “It’s a stream that’s not too far gone. The macroinvertebrate community is still good there.”