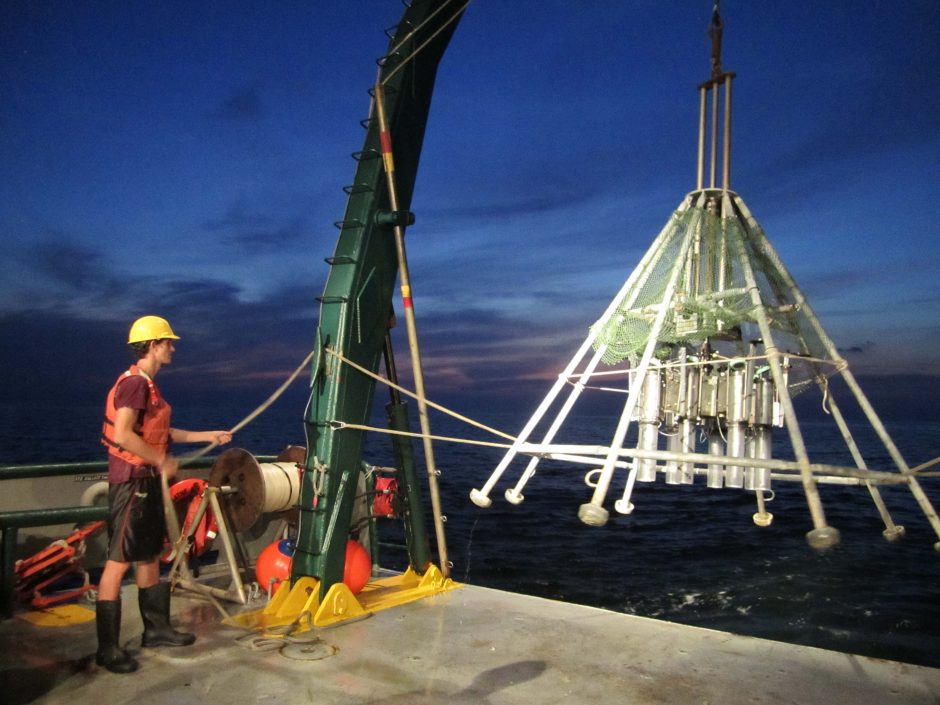 The multicorer on the research ship. (Credit: Uyen Nguyen, via communication)

In April of 2010, a series of mistakes snowballed into an industrial and environmental disaster as the Deepwater Horizon offshore drilling rig caught fire. The well was supposedly sealed by September of that year, but leaks were reported at the site in 2012. By any measure, it was an unprecedented disaster—but it has also inspired interesting new research from Penn State.

“The Deepwater Horizon disaster occurred at about 1,500 meters depth, and a large portion of the released oil was deposited on the ocean floor,” explains Penn State biogeochemistry doctoral student Uyen Nguyen. “In that case, oil biodegradation is considered a major factor in what controlled the fate of the spilled oil where other common processes such as evaporation and photo-oxidation are not available. However, this is the first time we saw a major spill at a great depth, so no one really knows how long it would take oil to biodegrade in the deep sea under cold, dark and high-pressure conditions.”

These conditions slow down metabolism in microbes, so the team thought cold, dark, deeper water conditions might slow down oil degradation; they decided to design an experiment to test the theory. 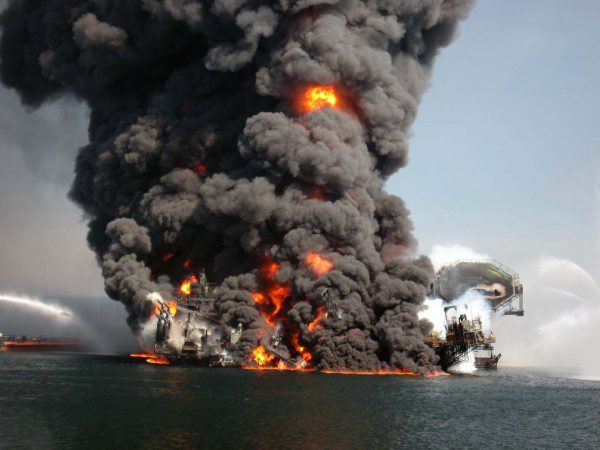 First, the researchers collected samples of sediment and water.

“I collected sediment samples with our team on a research cruise in 2014 using a multicorer, which collects 6 short sediment cores of up to about a meter in length from the seafloor at one time,” details Nguyen. “In the best cases, the cores come up with the sediment-seawater interface completely intact—sometimes you can see tiny plants or animals still attached. In the worst cases, especially when the sea is rough or we don’t know what texture the seafloor will have, the cores can come up empty. Soft mud is easier to sample than gravelly sediments.”

The team chose the sites for several reasons; some were sites the consortium had returned to once or twice a year since the 2010 spill to assess the impacts and monitor the recovery to pre-spill conditions.

“We tried to follow potential trajectories of where the oil would go in the DeSoto Canyon and elsewhere in the northern Gulf of Mexico,” Nguyen describes. “For the biodegradation study, we made sure to select sites that spanned a range of depths, temperatures, and sediment compositions, from sandier to muddier, for example.”

Next, the researchers simulated the same deep water conditions that would be present during an oil spill using oil reactors in high-pressure laboratories at Germany’s Hamburg University of Technology. 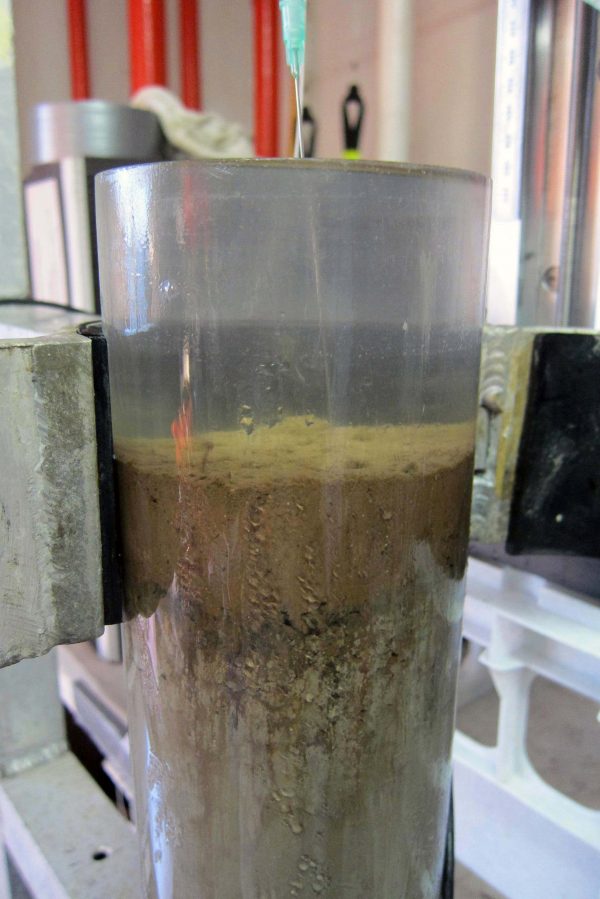 “We controlled temperature and pressure in experiments to reflect the in-situ conditions at the sea floor where the sediments were collected from,” states Nguyen. “Our sample sites range from 62 to 1520 meters in water depth, so experimental pressure was from 0.1 to 15 MPa and temperature was from 20 C to 4 C, accordingly.”

The team placed water and sediment samples with oil in pressure reactors at different temperature and pressure settings for 18 days.

“The reactors are made of stainless steel, capped with bronze lids, and designed for high-pressure experiments,” remarks Nguyen. “We used nitrogen gas to increase and maintain high pressure in the reactors. Inside these reactors, we placed glass vials that contained sediment, oil, and medium for incubation experiments. The reactors are also equipped with sensors to monitor the concentration of oxygen during the experiments.”

After the 18 day reaction period, the samples went to Penn State for analysis of the degradation over time in the reactors.

“We extracted the samples with organic solvents and quantified concentrations of oil compounds using gas-chromatography mass spectrometry (GCMS),” comments Nguyen. “We compared the profile of these compounds between initial and final time points to understand which molecules were degraded and to what extent. Some oil compounds are more appealing food for microbes, easier to eat, like n-alkanes (straight chain hydrocarbons)—and those tend to degrade faster than others that can persist in the environment long-term (like large polycyclic aromatic hydrocarbons). We saw the more ‘appealing’ or labile compounds disappear in most cases, but most of the less edible compounds stayed intact. So there was a range of compounds to look at to assess stages of oil biodegradation.” 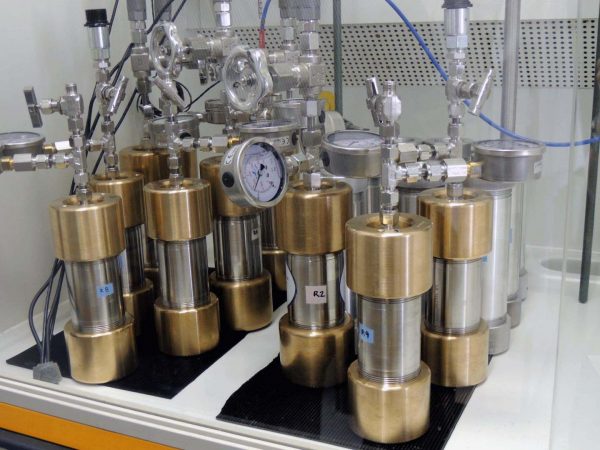 The team found that it would take n-alkanes in sediments about 42 days to degrade at depths of more than 3,280 feet, compared to about 19 days in shallower waters with optimal conditions for microbes. Rates of biodegradation also decreased by 4 percent for each drop of 328 feet.

Although there is still much to learn from a disaster the size of the Deepwater Horizon accident, some takeaways are already clear.

“These aren’t local problems because oil spreads easily, currents carry it into international waters, it’s hard to contain it,” remarks Nguyen. “The impacts are not just environmental, but economic—shipping is disrupted, fisheries, etc.—there are international ramifications. On the environmental side, fish and marine animals don’t recognize boundaries, either.” 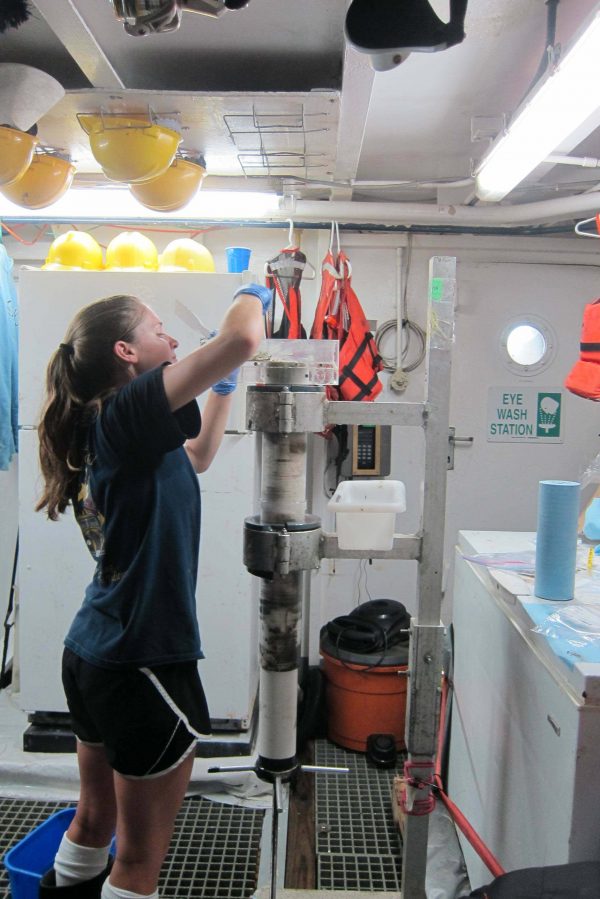 A researcher sections a sediment core on the ship. (Credit: Uyen Nguyen, via communication)

Although the Deepwater spill provided a sobering lesson in the dangers of drilling for oil in deep waters, such drilling continues—as does this line of research.

“People are developing technology for doing experiments like we did in the lab in situ on the seafloor,” adds Nguyen. “That’s a great way to minimize any experimental artifacts, exposure of deep-sea microbes to surface condition before experiments, for example, since the growth and metabolism of microbes can be affected if they are introduced to conditions different from their natural habitats.”

The team of scientists from this study isn’t finished with their work, either, and are working to further unravel the mystery of how oil biodegrades in different settings.

“On our side, we are looking at distributions of genes for hydrocarbon degradation in global marine metagenomic datasets, to try to understand whether hydrocarbon-degrading microbes are as ubiquitous and active in other regions as they are in the Gulf of Mexico,” states Nguyen. “The Gulf of Mexico has a long history of oil exposure from natural sources and human activities, but places like the Arctic don’t. If there is a spill there, will biodegradation be as rapid as it has been for the Deepwater Horizon spill?”

Top image: The multicorer on the research ship. (Credit: Uyen Nguyen, via communication)