A view of the lagoon in Fontenelle Park. (Credit: Clean Solutions for Omaha, http://www.omahacso.com/greensolutions1/fontenelle/.)

A recent renovation project in Omaha’s Fontenelle Park showcases how much good a coordinated effort to improve parks, sewers, and water quality can do. The 7.7 million dollar project is aiming to provide more recreational opportunities for locals while improving the quality of water in local streams and rivers. Adam Wilmes, an engineer with the City of Omaha, described the project, which began as a coordinated effort in 2014, to EM.

“The project was split into two construction packages: one for the park and lagoon work (now substantially complete, just establishing vegetation), and one for the upstream sewer separation work that is necessary to achieve the total 368-acre project goal,” explains Wilmes. “The sewer separation construction is still ongoing, and we anticipate completion in the fall of 2019. So it’ll be over 5 years with design and construction.”

The problem that this new plan is fixing is familiar to many places, especially older cities, where stormwater, other runoff, and sewage often mix when big storms occur. This is what happens in the combined sewer areas of Omaha, which is where Fontenelle Park is located.

“The main benefit of this project from a combined sewer overflow (CSO) perspective is the peak flow reduction,” Wilmes describes. “Lowered peak flows lead to reduced CSO volume, and that is the ultimate problem that was being addressed with this project. That said, we really like these kinds of projects because of the multiple other benefits that are realized.”

In other words, reduced peak flow means a much better service level in downstream pipes, less flooding, and fewer sewer backups. And while the improved amenity within Fontenelle Park is a little harder to assign value to, the added pond depth now allows for fish stocking, and the new treatment trains should result in improved water quality and improved park and recreation opportunities.

Adding to the lagoon’s size was a big component of this project.

“Water enters the lagoon from several locations,” details Wilmes. “In addition to the overland flow paths that direct stormwater flow to the lagoon from the park itself, there are three main storm pipe outfalls that enter the pond: one on the north, one on the west, and one on the south.”

The pipes drain about 314 acres combined, with an additional 54 acres of park area and adjacent ground that naturally drains into the lagoon, for a total of about 368 acres. Each pipe has a solution for ensuring high levels of sediment and refuse are kept out of the lagoon. 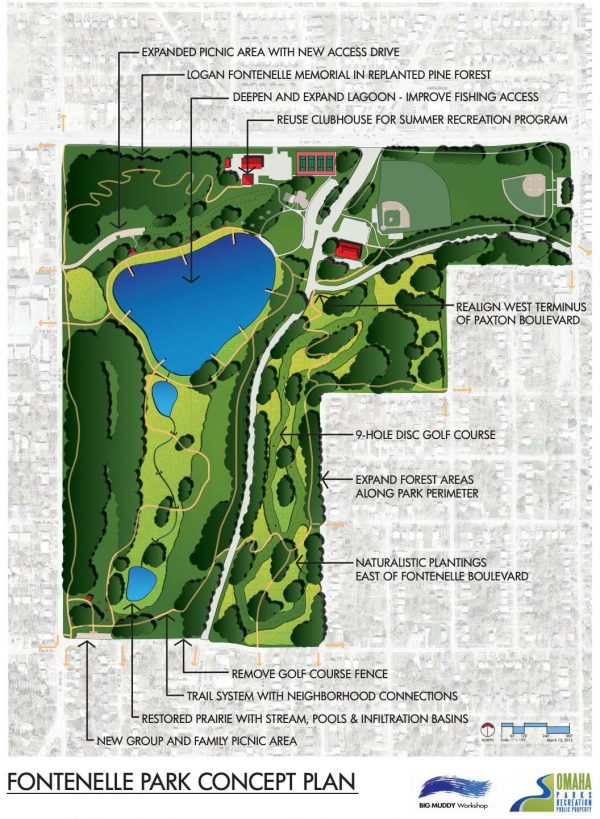 “For the 54 acres that drain naturally into the lagoon, the pathway is generally just overland flow,” states Wilmes. “As for the three storm pipes and associated acreages noted above, the flow pathway is the typical urban scenario where the runoff will generally come from houses and yards, enter a street for a period of time, where it will then enter the storm drainage system. All storm pipe outlets into the lagoon include screening to remove large trash, et cetera, prior to discharge into the lagoon. The larger pipes (to the west and south) also include sediment forebays to settle grit or other sediments to help maintain water quality in the main lagoon. The smaller northern pipe has a cyclonic grit separation unit that is intended to remove solids in lieu of a sediment forebay. So the general flow path is surface runoff to street to storm pipe to screening to cyclonic separator/sediment forebay, and finally into the lagoon itself.”

Once the flow does enter the lagoon, there are approximately 31 acre-feet of available storm runoff storage above the permanent pool that fit neatly into the treatment pathway. This helps to reduce the peak flows in the storm/combined sewer conveyance system significantly—according to Wilmes, peak flow from a 10-year storm event is reduced by approximately 80 percent.

“The City’s sewer collection system is over 100 years old in much of the older parts of town, and this is one of those,” remarks Wilmes. “The original sewer that was constructed in the Fontenelle Park area was built in 1917, and although many improvements have been made since then, the 1917 system remains in service. Because the area that drains to this sewer looks much different than it did in 1917, the old sewer does not have capacity up to current standards. However, reducing the peak flow by 80 percent means that those old pipes have greatly improved performance.”

In addition, Wilmes points out that this project included approximately 8,800 feet of new sewers ranging from 15 to 72-inches diameter—a major investment in upgrading the sewer collection system. Complementary changes to the park’s vegetation will increase rainfall infiltration into the ground.

“Much of the park will be replanted in turfgrass, although there will be a diverse array of vegetation along the lake edge, including upland native plants, emerging wetland plants, and wetland meadow plants depending on the location and how wet the various species like to be,” adds Wilmes. “In addition, we required deep cultivation and mixing with compost on all areas of the park that were disturbed with the project. The intent of this is to break up areas that may have been heavily compacted by construction equipment and to restore the infiltration characteristics of the soil.”

Now, the lagoon is about three times larger, and approximately 10 feet deep. The Nebraska Game and Parks Department will be stocking the lagoon with channel catfish, largemouth bass, and bluegills. The park also offers public access to picnic areas, a walking trail, a cross-country running course, and disc golf.

“I do want to note that we received a $100,000 grant from the Papio-Missouri River Natural Resources District to further increase the depth of the lagoon and improve fish habitat beyond what we had originally planned,” comments Wilmes. “Omaha Parks Department also received a grant from the Papio NRD to build more trails around the lagoon. It’s an exciting project.”

Top image: A view of the lagoon in Fontenelle Park. (Credit: Clean Solutions for Omaha, http://www.omahacso.com/greensolutions1/fontenelle/)