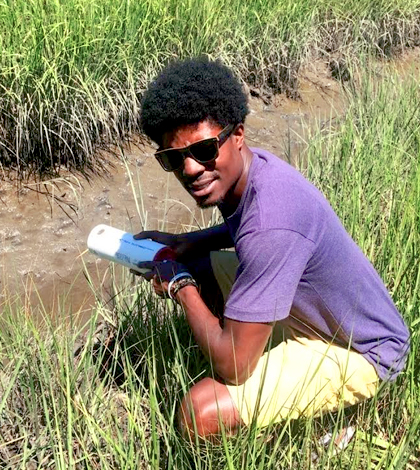 Kersey Sturdivant tests the OpenCTD in a local estuary. (Credit: Andrew Thaler / Oceanography for Everyone)

A few years back, the OpenCTD was just an idea. At that time, the device’s developers were talking in terms of its first blueprints and were still trying to achieve a conductivity measurement using a custom-built sensor made with two flat washers relying on Ohm’s law.

But it’s been three years since that conceptual phase. Where is the OpenCTD now? Is it ready for more widespread use by oceanographers and others interested in gathering marine data?

We can gladly report that its design is complete and thoroughly improved over what it used to be. And anyone who would like to build their own can easily do so by downloading instructions and a bill of materials from Oceanography for Everyone’s GitHub.

The OpenCTD has progressed by bounds since its inception. One of its developers, Andrew Thaler, a visiting scientist at the Virginia Institute of Marine Science, tells us that the device has made it through its first phase. He developed the OpenCTD with Kersey Sturdivant, McCurdy Visiting Scholar at Duke University’s Nicholas School of the Environment.

“We have officially completed what we’re calling Phase One. We have a working device that is simple enough for any oceanography group to use,” said Thaler. He described a get-together that he and Sturdivant had with a few other scientists to flesh out the sensor’s design. They called it ‘Hack the Ocean’ and promoted it on social media using the name as a hashtag. “It was a four-day build cycle where we built the units and put together intense documentation.”

The conductivity measurement, though difficult, has been solved.

“We built a conductivity circuit that worked, but it took 24 volts to run it,” said Thaler. “And we didn’t want people using that in the ocean.” Andrew Thaler and Kersey Sturdivant test the OpenCTD in a local estuary. (Credit: Andrew Thaler / Oceanography for Everyone)

So they instead sourced a conductivity circuit from Atlas Scientific. The price for that is around $50, and performs better than anything Thaler and Sturdivant could put together on their own. In addition, the part is easier for those with little to no experience to use. It simply reduces complexity in the build process.

Keeping things simple is something that the crew takes pride in. Just check out the bill of materials online. They are all things easily sourced through Amazon’s web store or a hardware store. And one of the items they jokingly list is a coffee maker.

“We like to inject a little humor into building the instrument. We’re having fun with this too,” said Thaler. “We want this to be something people won’t see as intimidating.”

The same can be said for the Niskin3D Water Sampler, another open-source device that the two have developed alongside the OpenCTD. The two sensors are excellent together, as water sample analysis and data on conductivity, temperature and depth fill most oceanography datasets.

As proof of the side-by-side utility of the two sensors, Thaler says they have performed in a test deployment in Lake Superior all the way down to 140 meters without any difficulty.

“Now that we have a working prototype, I live near a tidal estuary where we’ve been testing it and posting data,” said Thaler. “We have a bunch of developers to keep news and excitement about the project going.”

In future work, Thaler says that he has started developing a marine quadcopter for eventual use in tracking algal blooms in Chesapeake Bay in real time. The idea is that it will periodically land to collect environmental samples.

So far, it has been tested on the York River, where flights have been low to the ground to avoid Federal Aviation Administration regulations. But it is well on its way to joining the OpenCTD and the Niskin3D as another solid device from the group.