OpenCTD project looks to bring oceanography instruments to the people 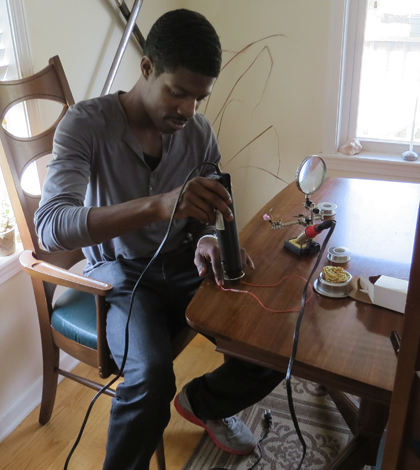 Kersey Sturdivant works with the components of a small CTD (Credit: Andrew Thaler)

Environmental scientists use CTD sensors (conductivity, temperature and depth) to get a basic view of the ocean’s characteristics. The sensors are normally configured in large bundles and cost thousands of dollars. Their use is somewhat limited to large organizations with adequate funding.

Now two researchers are trying to bring the cost down, from thousands of dollars to hundreds, and make it easier for oceanography enthusiasts to take measurements on their own. Kersey Sturdivant and Andrew Thaler, both post-doctoral researchers at Duke University, have started a campaign on the crowdsourcing website RocketHub to fund the design of a personal CTD. A smaller, more affordable CTD could bring down the barriers for citizen scientists and ultimately result in more usable data with wider use.

“I’ve always said the goal is not to compete or replace the typical CTD, but provide an avenue through which interested parties can get involved,” said Sturdivant.

One way they can get involved is to contribute to the fundraising effort. The team’s goal is $10,000 – listed online under the OpenCTD project – to cover materials, testing and final designs. Renting boats to take the CTDs to water is also included in the cost.

The blueprints in development will be available for free and the researchers hope to develop a manual that can be downloaded on popular E-book reading devices. Once the project is complete, their personal CTD sensors should cost around $200 in materials.

The CTD they’re constructing is a small one and they can be packaged into small devices, Sturdivant says. On a sonde, there could be multiple sensors, but only three are needed for the CTD they’re designing. Size and flexibility go along with bringing the cost of the sensors down to widen access.

To do that, OpenCTD will have a PVC body, a copper thermistor and a basic electrode that uses two stainless steel washers to make conductivity measurements using Ohm’s law. The design uses an Arduino micro-controller and looks to hit 5 percent disparity in readings from YSI’s Castaway sonde. The complete design process is about halfway through. The prototype in the works integrates all the sensors on a single circuit board, weighs around three to four pounds and has a single SD memory card. Water and pressure tests are still underway and the calibration process will then be developed.

“What we’re trying to do is make one for about $200 that won’t inhibit a layperson, general enthusiast or scientist,” said Sturdivant.

Opening the project up for crowdsourced funding also piques early interest. Funding has been steady for the project online and donations can be submitted until August 17.

The public interest has been noticed by several private companies, which Sturdivant says have offered to fund the project. He and Thaler declined, however, because that would go against the project’s goal of open design and innovation.

“We want to see if we can construct a device using readily available parts to take accurate measurements,” said Sturdivant. “We’re looking to build something for the general populace, to tap into interested users for funding. That allows us to maintain an openness behind the project.”