Paving The Way For The Nutrient Sensor Boom 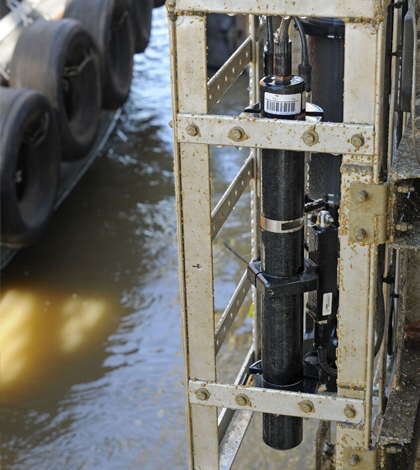 A monitoring station including a nitrate sensor on the Lower Mississippi River. (Credit: USGS)

Nutrient sensor technology is changing the way scientists study the pervasive problem of excess nitrogen and phosphorous runoff in surface water, but the instruments aren’t cheap.

For those who can afford them, the current generation of nutrient sensors provides a stream of continuous data — one that opens new doors of understanding into nutrient dynamics that would otherwise remain closed to the slow cycle of manual sampling and lab time.

But for those priced out of the range of $20,000-$30,000 per instrument, take heart: Experts say viable sensors at a quarter of that price could be on the way.

“People are trying to focus on what we know from high-frequency (nutrient) data that we didn’t know before,” said Brian Pellerin, biogeochemist with the U.S. Geological Survey’s Office of water Quality. “At the same time, there’s a push to get the cost down so that there is a much broader network of folks using them.”

Anticipating a cost-driven boom in the number of nutrient sensors deployed across the country, several federal environmental scientists are laying out their visions for how their agencies can guide the development of these instruments, how they’re used and what happens with the deluge of data they’ll produce.

“We put our heads together and said, ‘Where can we pitch in?” said Pellerin. “What kind of things can we tackle that should help the broader community?”

The answers they came up with, which were recently published in the Journal of the American Water Resources Association, include building relationships with sensor manufacturers that incentivize development of less expensive instruments. One example of that is the ongoing Nutrient Sensor Challenge. Pellerin said federal agencies can also take the lead on building a core network of nutrient sensor stations across the nation, as well as standardizing data collection and dissemination methods.

Nutrient sensors, particularly nitrate sensors, are maturing as nutrient pollution is increasingly recognized as a major environmental problem across the country. In 2007, the National Estuarine Eutrophication Assessment found 65 percent of “major estuaries” in the U.S. have moderate-to-high nutrient pollution. A 2009 report from the State-EPA Nutrient Innovations Task Group estimated that excess nutrients affect 14,000 waterbodies. A 2010 report from the USGS found nutrient concentrations have remained steady or risen at many surfacewater and groundwater sites since 1992.

There’s hope that a more detailed picture of the problem provided by continuous measurements could lead to more targeted management and more successful runoff mitigation. Though the sensors are still expensive, they are becoming more common. The USGS, for example, has nutrient sensors in place at more than 100 sites. Two years of continuous nitrate measurements from the Lower Mississippi River along with discharge. (Credit: USGS)

Pellerin and his colleagues have already shown what these sensors can do in the Mississippi River. Nutrients from the basin wash out into the Gulf of Mexico, fueling hypoxia and creating a dead zone that spans hundreds of miles every summer. Scientists estimate the size of that dead zone using a calculation of nutrient loads based on around 20 manual samples collected throughout the year. The nutrient measurements feed into a model that also considers discharge and several recent years of data to produce an estimate of the nutrients flowing into the Gulf.

Using a model to fill in the gaps between a few manual samples has worked well on the Mississippi, but Pellerin said it still involves a lot of uncertainty and leaves a lot of room for error. In a 2014 study, the USGS tracked nitrate in the lower Mississippi River with a sensor in 2012 and 2013, and those direct measurements sometimes showed significant differences from the modeled load estimates. The sensor data differed from the modeled nutrient concentrations by as much as 25 percent in some months. Though the models underestimated the nutrient load in the river by just 3.5 percent across the two-year study period, any improvement in accuracy is worth the high price of current sensors in large, nutrient-plagued basins like the Chesapeake Bay and Mississippi River.

“In places where you’re spending billions of dollars on the ground to improve management, the cost of this continuous data is trivial,” Pellerin said.

But the price of a nitrate sensor is still a show-stopper for anyone working at a smaller scale, like watershed groups or some university researchers. That’s where the Nutrient Sensor Challenge comes in. The challenge launched in December 2014 as a federally backed effort to drive innovation in affordable nitrogen and phosphorous sensors. The Alliance for Coastal Technology, a partnership working to advance sensor development that administers the challenge, spurred participation by releasing a report on the potential market for nutrient sensors in the $4,000-$5,000 price range. Their assessment found U.S. users would likely purchase 20,0000 to 50,000 units over five years.

“The market is actually much bigger than people often assumed,” said Mario Tamburri, director of the alliance. “You’re talking about hundreds of millions of dollars for these instruments.”

By March 2015, 29 registered teams were competing to build phosphate and nitrate sensors that would be judged on criteria including ease of use, the ability to withstand a three-month deployment and purchase price of $5,000 or less. The alliance hosted 12 of those teams for no-cost beta testing for their prototypes at sites in Hawaii, the Great Lakes and Chesapeake Bay. The field has since been narrowed to six teams representing nine sensors: four for phosphate and five for nitrogen.

Tamburri said some of those instruments refine and improve traditional nutrient sensing methods, and a few that are more innovative, lab-on-a-chip approaches. And nearly all of them are meeting or beating the $5,000 price tag. The finalists’ sensors will undergo final verification testing in the lab and in the field this spring and summer. That data will go to an independent judging panel in the fall.

Though the panel will pick winners, Tamburri said the true incentive is a chance at a piece of the untapped market. Challenge administrators have heard from teams who weren’t selected as finalists that still plan to continue developing their sensors.

“The challenge is really doing what we wanted to do,” he said. “I think we are making that difference in our ability to measure nutrients.” The USGS already has a network of nitrate sensors deployed across the country. (Credit: USGS)

If more affordable nutrient sensors hit the market, that will mean a lot more people collecting a lot more nutrient data, Pellerin said. And there are a few things federal agencies can do to support them and help them make the most of their data. One is building and operating a core national nutrient monitoring network — a backbone of long-term sensor sites across the country. The USGS specializes in running that type of system and already operates a water quality monitoring network on large U.S. rivers. A core network would guarantee publicly available data from big, complicated sites like the lower Mississippi where the USGS already works but individuals may not have the resources to deploy their sensors.

Environmental agencies can also work together to develop common data standards and methods for nutrient sensor users, Pellerin said. While that would help make sure individual sensor users are collecting high-quality data for their own projects, it also feeds back into the plan for a core national network. Nutrient sensor users — whether they’re an academic researcher looking at a spring in Florida or a drinking water treatment plant operator in Iowa — could gain important context from nearby core sites if they’ve collected their data using the same standards. Those same users could help fill the gaps in the core network by making their data publicly available, a key tenant of open-data standards that federal agencies are increasingly advocating for.

But a core network and guidance on data collection aren’t just meant to benefit agencies like the USGS, Pellerin said. They’re intended help people collect good data and manage it well. And it’s better to start talking about it now, before a potential nutrient sensor boom.

“There are enough people buying and using them now that if the cost comes down, that’s going to explode,” Pellerin said. “We want to get ahead of it.”

Top image: A monitoring station including a nitrate sensor on the Lower Mississippi River. (Credit: USGS)