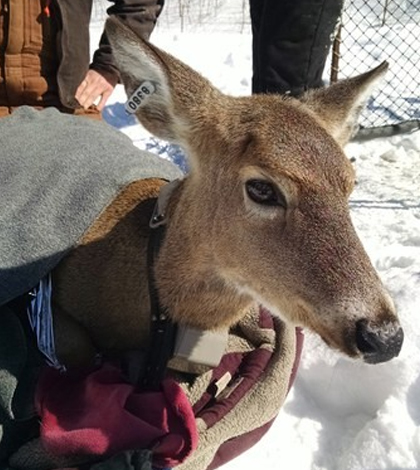 A deer is ear-tagged and outfitted with a GPS collar. (Credit: Duane Diefenbach / Penn State University)

GPS technology is ubiquitous these days, found everywhere from smartphones to automobiles. But far from helping humans get around, the technology has also helped us to learn more about the creatures that we share the planet with.

One example of this is an ongoing effort out of Penn State University that relies on GPS tracking collars to follow the wide-ranging movements of white-tailed deer, animals that can have big effects on the landscapes they inhabit. This is largely because of their feeding habits, as they aren’t picky — deer will chow down on anything, from apples to grass to tree bark.

And so given the havoc that hungry deer can wreak on forests, knowing their movement behaviors can be incredibly valuable for researchers. Those at Penn State are hoping that their efforts to track deer living in Pennsylvania forests will help to figure out ways to better balance the needs of deer with those of forest vegetation.

One fear that the Penn State scientists have with white-tailed deer is that their feeding habits are so broad that they can devastate certain plant species, like small trees. Too much browsing on small trees in a forest can eliminate their stocks, putting the larger forest at risk if a timber harvest or natural event, like ice storms, occurs.

Efforts to tag white tails at Penn State University is going into its third year and focusing on deer in three state forests: Rothrock, Bald Eagle and Susquehannock. Each deer under study is fitted with a GPS collar to monitor its location as it moves, while researchers also go out into the field to collect data on vegetation levels in locations each deer visits. A map shows all 2,570 locations collected on one deer throughout 2013. (Credit: Duane Diefenbach / Penn State University)

The deer collars rely on satellites to estimate the location of an animal. After transmitting to satellites, info is then sent to researchers through the Internet who record changes over time. The technology allows for them to watch remotely as different white tails move to and from forest areas.

The location data are proving useful, but there are other insights rising to the top, like the movements that male deer in particular make to avoid being shot by hunters. It’s possible, scientists say, to correlate the migrations of male white tails with the beginning of hunting season in Pennsylvania. The response is quick, they’ve found.

And the GPS trackers are so much more convenient than other methods of the past, scientists say, like old very-high-frequency (VHF) devices that required routine visits to study areas and manual triangulations to determine animal movements. But nowadays it’s possible to get hundreds of GPS locations on just one deer each day, making it a game changer for researchers trying to assess their impacts to the forests they inhabit.

The tracking collars may also help in finding ways to maintain deer populations at levels where forest habitat is sustainable, something that is important for white tails but also for other wildlife species, plants and recreation enjoyed by humans.