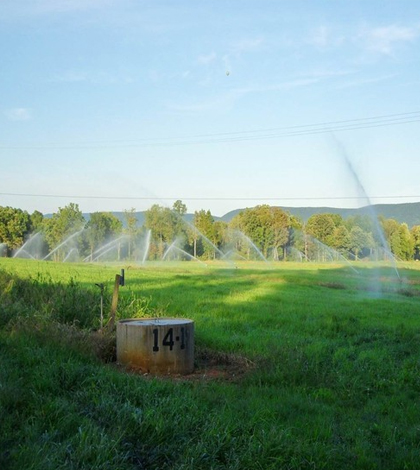 Penn State University’s Living Filter is a 600-acre area of farm and forest land that is filled with crisscrossing pipes and sprinklers. These pump the university’s treated wastewater into the lands where they settle and get sifted through a natural Earth landscape. The idea for such a Living Filter is a good one, and it has been used by the university to clean wastewater for more than 50 years. It inexpensively maintains groundwater levels and helps with meeting pollution-control requirements at the same time.

But the water isn’t so clean before it runs through, and there are questions as to what effects it has on lifeforms that live there. Researchers at the university recently undertook an investigation looking at amphibians dwelling in the Living Filter and how they respond to the levels of contaminants present in treated wastewater sprayed onto the lands. These substances include caffeine, pesticides and synthetic estrogen, among other things.

To approach the study, scientists at the school took recently hatched wood frog tadpoles from pristine sites and put them in mesh enclosures in four different ponds in the Living Filter. Two of the ponds were the cleanest found in the area while the two others were those judged to be most impacted by contaminant exposure.

But through the course of the eight-week study, there would be a small hiccup in completing that portion of the investigation. “All of our non-irrigated pond sites dried up, which is sort of a startling conclusion,” said Heather Gall, assistant professor of agricultural and biological engineering at the university and lead on the study. “But the wastewater irrigation kept water in the ponds and the tadpoles we had survived.”

And so Gall and others weren’t able to complete that part of the study, but they still gathered valuable data on ponds throughout the Living Filter. This was accomplished using equipment like HOBO water level loggers, which were deployed across all 10 study sites, and ISCO automated water samplers that gathered discrete samples every day.

Other water quality sensors, tracking parameters like dissolved oxygen, were also deployed in the ponds to monitor conditions while researchers were away. These reported to solar-powered data loggers that gathered the readings and allowed scientists to download the data each time they visited the sites.

“We also went out and collected grab samples that we analyzed back at the lab for nutrient species and ran a suite of analyses on emerging contaminants,” said Gall.

All of these tactics put together, though lacking finds on the effects of contaminants to the tadpoles, yielded some pretty valuable insights. Gall says that all of the water samples collected, with the exception of one, contained hormones in them that could affect amphibians.

Another find has broad, long-term implications for conditions in the Living Filter as a whole. When looking at water being sprayed onto the Filter compared to water in the ponds, researchers found that estrogen levels in the ponds were higher. “We think that could have been created by a buildup in the ponds. The operation of the Living Filter has been building up since the ‘80s,” said Gall. “It’s an interesting find. We would’ve suspected dilution, but that’s not what we found (in the ponds).”

One parameter, dissolved oxygen, was particularly telling in that find as typical aerobic conditions would have probably led to the dilution researchers expected in the ponds. But they didn’t find healthy levels; instead, dissolved oxygen in all of the ponds was low throughout the study, which scientists believe could be playing a role in how the hormones are sticking around.

“Time after time, we continued to see these hormones — not only elevated concentrations, but persistent concentrations,” said Gall. “The dissolved oxygen and oxidation reduction probes helped us to try and tell what was going on. We used the real-time data to provide us with insights into what was happening.”

Those and other insights are going to be shared with departments that operate the Living Filter at Penn State University. They are the same entities that funded the study, and include the university’s Institutes of Energy and the Environment and Office of Physical Plant. Much of the chemistry data will also be shared with Gall’s colleagues who are doing ecotoxicology work so that they can assess if the studies they’re doing are environmentally relevant for judging the impacts that exposure to hormones and other contaminants can have on amphibians.

“What we have (data) are probably on the extreme sides of things and (our levels) are probably not typical,” said Gall. She points out more common sources of these contaminants like runoff from roads and urban areas or yards; de-icing agents that drip from cars; or also leaky septic tanks. “We think our study represents the worst-case scenario and we hope the values we found can inform exposure studies.”