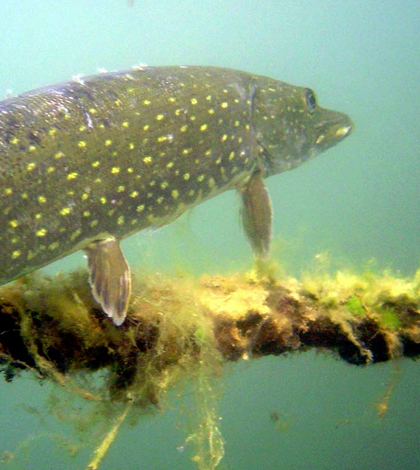 A study of pike spawning near the Baltic Sea has found that the fish are able to locally adapt to habitats to help ensure the success of their offspring. Researchers at Linnaeus University made the find through a very carefully designed experiment, precise methods of which can be found in the open-access journal PLOS ONE.

In a nutshell, scientists at Linnaeus captured members of two subpopulations of pike while they were migrating from the Baltic Sea to two different wetlands nearby to spawn. In one wetland, it features a hard bottom with flooded grassland and submersed vegetation. The other has a soft bottom with more suspended material and less submersed vegetation.

Fish from both subpopulations were captured with fyke nets placed in the streams so that they could be caught on their way to their preferred spawning ground. Once captured, sexual fluids and eggs were harvested from the fish.

The researchers artificially fertilized the parental pairs from each subpopulation in the field, each consisting of one male and one female for each split-brood. Each parental individual was only used for one split-brood.

The embryos, 2,500 of them, were then distributed simultaneously in each of the wetlands by two different teams of researchers, to protect against the possibility of results being influenced by varying handling times. Half of the offspring were planted in the native habitat and the other half were transplanted to the non-native habitat.

From there, researchers watched as the two groups of embryos grew. Every second or third day, they photographed the embryos with a digital camera to record the maturation process, noting changes along the way. And they counted how many hatched as well as how many of those larvae survived through the yolk sac phase.

Scientists found that the pike offspring performed better in their native habitats versus non-native areas. In addition, the embryos growing in native wetlands also did better than those that had been translocated despite the fairly short distance between the two habitats.

But researchers also noted some variability between the viability of pike offspring. Some families suffered, while others didn’t suffer at all. This led scientists to note that adjustments to changes in habitat are actually sometimes good because they can help fish populations better withstand environmental shifts in the future.

The research team also investigated whether female pike invested differently into reproduction, to compensate for differences in survival of eggs and embryos between spawning habitats. They found that some females invested a lot into reproduction and produced many small eggs, whereas others invested less and produced fewer but larger eggs, depending on the subpopulation.

The results are intriguing because they show that local adaptations take place under conditions where population changes may not be anticipated. And the finding that adaptations increase the performance of embryos in native spawning environments may actually promote homing behavior among the pike, which could reinforce isolation among different pike subpopulations and spur divergence between them.