Poás Volcano Gives a Glimpse of Life on Mars 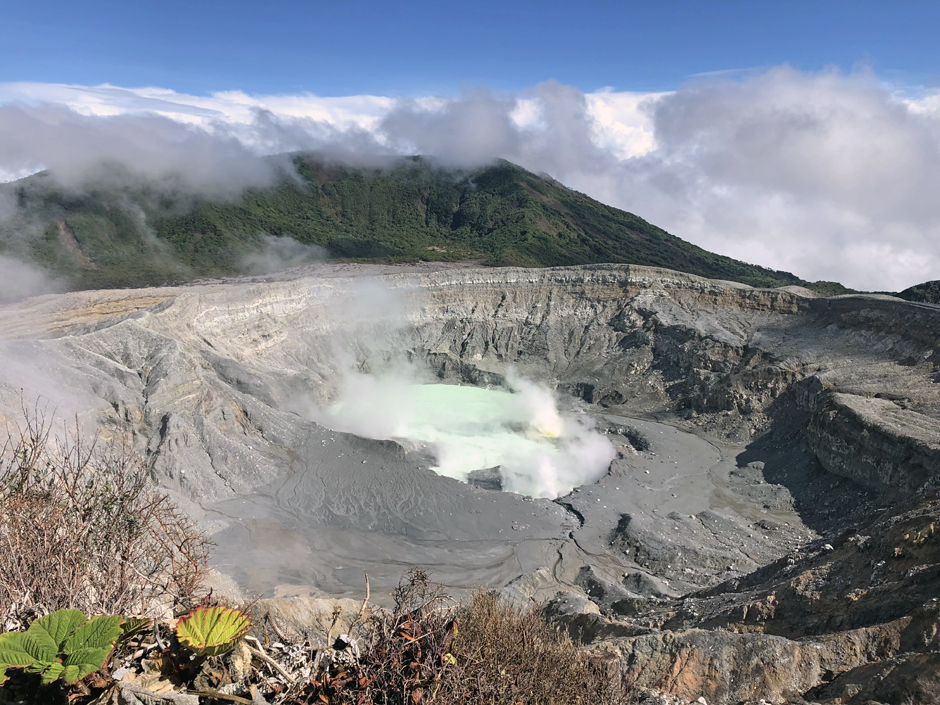 To get an idea of what life would be like on Mars, you don’t need to travel millions of miles away–instead, you could go to Costa Rica and visit the Poás Volcano and its crater lake, Laguna Caliente.

“Collectively, the suite of alteration minerals at Poás crater and identified across Mars at relict hydrothermal sites shows strong correlation, indicating the high temperature and highly acidic geochemical processes occurring at Poás are quite relevant to understanding past hydrothermal processes on Mars,” says Justin Wang, a graduate student at the University of Colorado, Boulder. He is currently conducting research at the Laboratory for Atmospheric and Space Physics alongside his advisor, Brian Hynek. Wang is currently a master’s student in aerospace engineering. Wang, Hynek, and others have spent years studying the Poás Volcano and Laguna Caliente, finding similarities between the area and what is presently known about the Martian landscape. 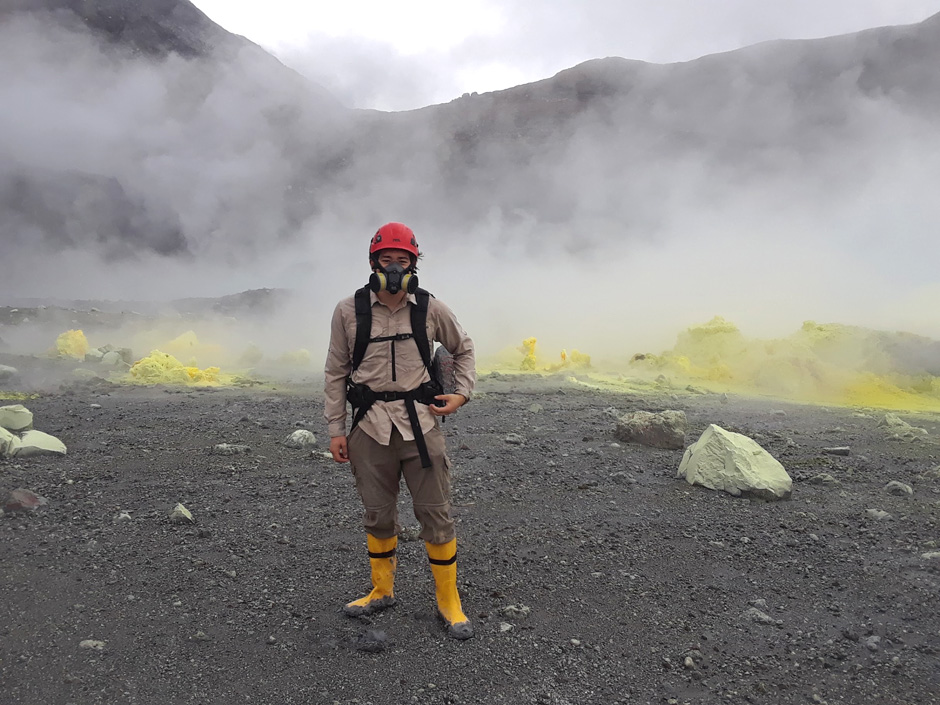 Wang notes that similar chemical reactions ongoing in the Poás Volcano also were known to have occurred on Mars. “Hynek’s astrobiology paper in 2018 describes this to the best detail. It explains that fumaroles have provided alteration minerals that are akin to a variety of relict hydrothermal sites on Mars. For example, jarosite is a relatively common alteration product at Poás, as is gypsum, and these materials are both found in putative relict hydrothermal deposits on Mars,” says Wang.

He also notes, “Hydrated silica is another common alteration mineral that is widespread at Mars hydrothermal analog sites and on inferred similar paleo-environments on Mars. The high-temperature silica phase of tridymite is also widespread around Poás fumaroles and was recently detected in Gale crater by the Curiosity rover.”

He further mentions, “Dissolved iron at Poás leads to abundant hematite and occasional goethite, which are common products across relict hydrothermal systems on Mars, such as within Gusev crater. Elemental sulfur is ubiquitous around the active fumaroles, forming large tabular crystals and occasionally solidified flow ribbons of previously molten sulfur. Collectively, the suite of alteration minerals at Poás crater and identified across Mars at relict hydrothermal sites show a strong correlation, indicating the high temperature and highly acidic geochemical processes occurring at Poás are quite relevant to understanding past hydrothermal processes on Mars.”

While the environment of Poás Volcano was extreme, the equipment needed for Wang’s study was fairly typical for sampling. “We sampled using nitrile gloves on hand and dipping Falcon tubes into Laguna Caliente. We also took some samples attached to a pole in order to be farthest away from the shore. You have to be really careful when performing sampling by hand here since the pH of Laguna Caliente is near 0,” says Wang. The lake is also full of toxic metals.

The field team hiking out of the Poás Volcano after field sampling. (Credit: Justin Wang)

Despite the incredibly harsh and highly toxic environment, life flourishes. While the life at Poás is not very diverse, what is there has been determined by metagenomics studies to be highly adaptable. Wang found a dominance of Acidiphilium spp. in his samples, and this was true for his study and one conducted several years prior. The other microorganisms he found weren’t extremophiles, they were typical soil and root microbes believed to be introduced to the lake from rainfall. Acidiphilium spp. makes sense as the dominant microorganism in Laguna Caliente, as it is a well-known acidophile found around the world in hydrothermal environments and acid mine drainages.

Interestingly, while Wang’s samples exhibited low biodiversity, they hosted a wide range of genes and adaptations. They included many genes that pump hydrogen ions (for acidity) and many other toxic metals (such as arsenic) out of the cell to survive. What Wang found to be most interesting in the metagenomes were the numerous metabolism genes discovered. The found materials included genetic pathways to create energy using sulfur, iron, arsenic, carbon fixation (like plants), simple and complex sugars, and bioplastic granules (which microorganisms can generate and use as energy and carbon reserves during stress or starvation). 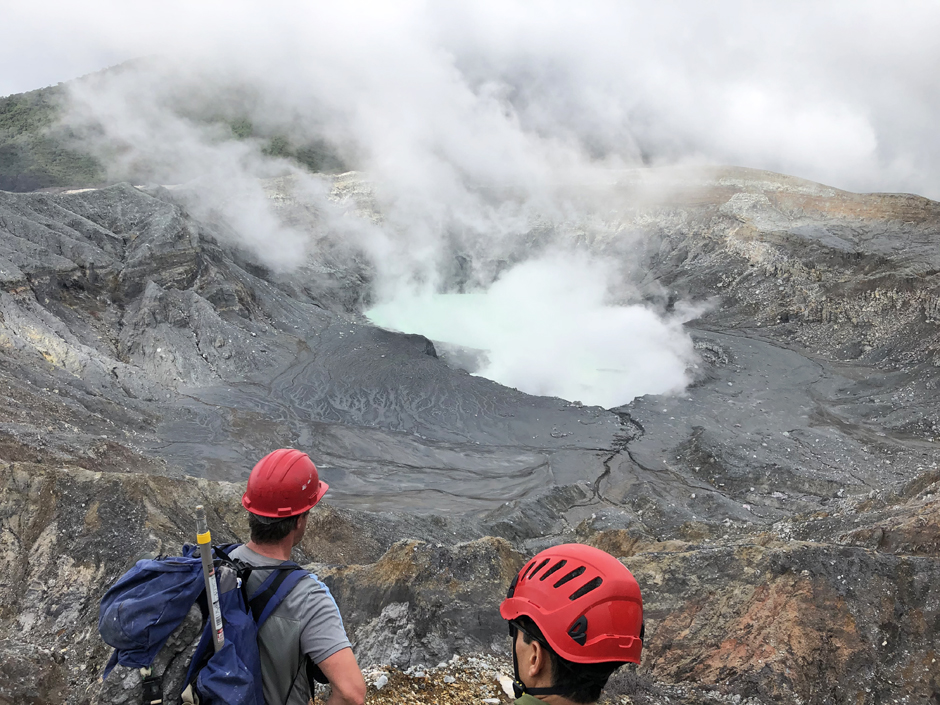 Overlooking Laguna Caliente and the Poás Volcano after climbing out of the crater. (Credit: Justin Wang)

The Goal of the Poás Volcano Study

Wang was surprised that, even though there were numerous phreatic eruptions that influx toxic metals, extreme acidity, and heat to the lake, some of the same microorganisms in the same environment persisted over the years. Compared to the first study, when the team was only looking at the microbial diversity in the lake, the second study also looked at the metagenome of the samples, where his team was able to analyze the genetic adaptations of the microorganisms. The two earlier studies gave them a clue about how these organisms survive in these environmental extremes and helped develop their theories of how life persists in the Poás Volcano.

“Our main goal was to assess how life on Mars, if it did exist, could survive long-term in hydrothermal environments,” summarizes Wang. “The Poás Volcano represents an extreme of both Earth life and of Martian analog environments, and so studying the biology in the Poás Volcano helps study an extreme case on Mars. We believe hydrothermal systems on Mars are some of the best suited environments for life throughout the planet’s history, and so another goal of this research is to critique that belief further.”

The Poás Volcano study is ongoing and will undoubtedly continue to reveal the incredible abilities of living organisms to survive even in the most challenging places.

Recommended study on the biology of the Poás Volcano: