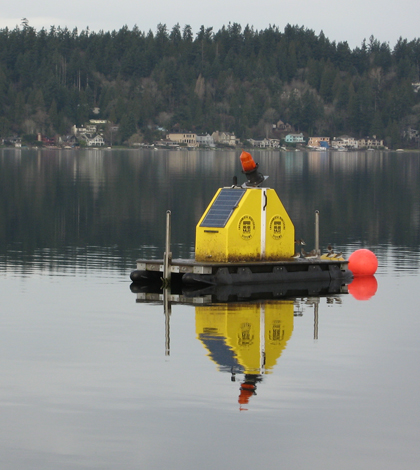 Washington’s King County is home to some of the state’s largest lakes and borders much of the central basin of Puget Sound. As a result, its citizens–especially those of its largest city, Seattle–are affected every day by the surrounding water bodies.

“The story about Seattle is that we have a lot of traffic problems because we’re squeezed in on all sides by water, practically,” said Curtis DeGasperi, a hydrologist with the county. “The I-5 corridor skirts through between Lake Washington and the sound.”

But traffic jams aren’t the locals’ only connection of the region’s aquatic backdrop. And if the public’s enthusiasm for the real-time data published by the county’s water quality monitoring programs is any indication, the relationship is mostly positive.

The county operates a network of water quality sensors on Puget Sound and one profiling platform each on lakes Washington and Sammamish. The data is published live on the county’s website. Program staff hear quickly whenever the data supply is cut off for maintenance or other downtime, whether it’s from scuba divers on the sound or swimmers on the lakes.

“We have a group of triathletes that seem to rely on the information that’s being put out there,” DeGasperi said of the lake platforms. “So whenever it goes down, I end up getting emails from some of these swimmers that want to know when the system is going to be back up.”

While the swimmers are mostly interested in temperature data at the lake surface, the YSI platforms measure a full suite of parameters at every meter along a vertical profile more than 50 meters deep on Lake Washington and 20 meters deep on Lake Sammamish. The platforms collect six profiles a day in the summer and three in the winter, when the low sun angle and cloudy weather limit the energy delivered to the station’s solar panels. The data from the platforms compliments a once- or twice-monthly sampling program conducted by boat that the county has conducted since the early 1990s. But the history of water quality monitoring on the lakes goes back another 50 years, when researchers at the University of Washington began collecting data on Lake Washington. Those long-term data showed that the lake has warming and stratifying earlier and earlier in the year, which effects the development of a spring bloom that the ecosystem depends on for food for rest of the year.

Even though the University of Washington data could show those effects, they were likely only sampling every two weeks, DeGasperi said. Now that the county has a system measuring temperature and fluorescence profiles every day, he said, they have a way to really pin down when the lake stratifies and the algae blooms.

“These algae blooms can develop into large amounts of algae over the course of a few days, so when you’re even sampling every two weeks you can miss the peak of these events,” he said. “We can start to take a better look at the trends through time of the timing of the stratification and the effect on the spring algae bloom, and some of the other details that you don’t as easily see if you’re just going out every few weeks.”