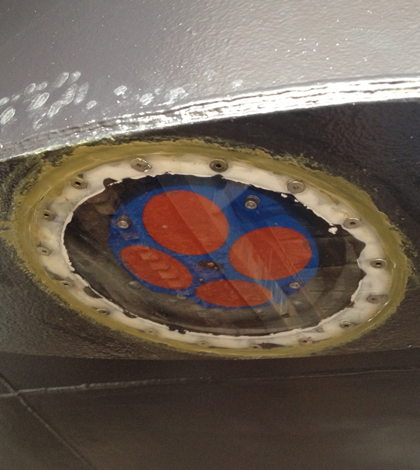 Newly installed acoustic sensors on two Washington ferries will help monitor water circulation in Puget Sound. The ships sail back and forth over the Admiralty Inlet, a three-mile span that is the gateway between the Sound and the Pacific Ocean.

Scientists with the Applied Physics Laboratory at the University of Washington will manage the monitoring effort that relies on acoustic doppler current profilers to measure a host of environmental parameters. They expect their work will yield new insights into the events taking place beneath the water’s surface every day.

“We hope to quantify the sub-tidal exchange flow through Admiralty Inlet, especially the intrusion of dense ocean water into Puget Sound,” said Jim Thomson, associate professor of environmental fluid mechanics at the university.

To get there, the devices will collect measurements on the varying depth of Admiralty Inlet, water velocity and flow, the exchange of saltwater and freshwater in the channel and the volume of water passing through, also known as discharge.

Those figures will be combined with data sets that Thomson and others have already collected on the inlet. A moored station has monitored conditions there since 2009. Like the ferries, it has an ADCP, but also supports sensors to monitor water quality and records stats on conductivity, temperature, depth and dissolved oxygen. The ADCP effort is supported by the Washington Department of Ecology and Washington State Ferries, with funding from the U.S. EPA. One ADCP has already been mounted in the hull of the M/V Salish. Another should be installed in the M/V Kennewick later this year.

“The initial installations are for five years, though we hope to continue the data collection indefinitely,” said Thomson. That is subject to funding changes, he notes. Still the project is quite cost-effective: Just one ADCP can gather as many measurements across the inlet as 32 bottom-deployed sensors would.

“We will map the currents across the inlet 24 times per day and use a low-pass filter to observe sub-tidal flows,” said Thomson. Thomson is also interested in tracking the transfer of low-oxygen ocean water through the inlet because it is suspected to cause fish kills in nearby Hood Canal. Distinguishing ocean water’s role could help water managers determine if runoff or leaky sewage systems compound that problem. Researchers are also interested in studying acidity of the ocean water coming in.

The ADCP installed on the M/V Salish is already collecting data as it makes trips across Admiralty Inlet. After the second one is installed, Thomson estimates there will be enough data to start looking for trends in a year.