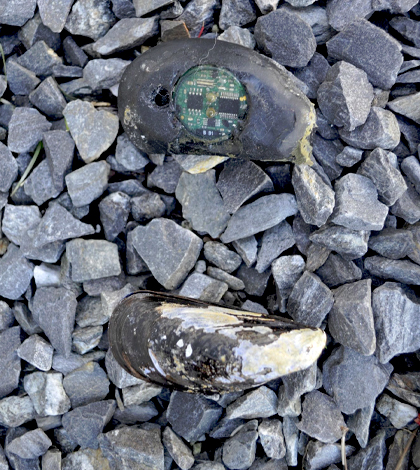 Brian Helmuth is a professor in the Department of Marine and Environmental Sciences at Northeastern University in Boston. Along with collaborators, he has deployed “robomussels” for varying lengths of time at 71 sites worldwide. At some of the sites, the temperature loggers deployed in mussel shells have been recording nearly continuous measurements for 18 years. The Environmental Monitor recently asked him about that work using biomimetic sensors and other findings he’s made relating to tidal ecosystems.

Environmental Monitor: Why did you want to develop the robomussel loggers?

Brian Helmuth: The main impetus for the development of the loggers was the realization that the temperature of any object (animal, plant, recording instrument) exposed to the sun is typically much warmer than the temperature of the surrounding air. Since, unlike mammals, 99 percent of organisms on Earth don’t make metabolic heat, this means that the vast majority of terrestrial and intertidal organisms have body temperatures that can’t be determined from air temperature alone. Moreover, the color, shape and size of an organism drives how much heat it absorbs, so two animals sitting side by side under the same conditions can have radically different temperatures from one another as well as from the surrounding air and surface. This is key since it is the temperature of the animal’s body — and not its surroundings — that drives physiological stress and risk of death.

EM: What are biomimetic sensors?

BH: Biomimetic sensors mimic the thermal characteristics of animals by nature of having the same color, shape and thermal mass (product of mass times specific heat capacity). We found, for example, that commercially available, unmodified loggers record temperatures that are, on average, 14 degrees Celsius different from that of adjacent mussels. When we encase those same sensors in epoxy shells that mimic mussels, robomussels, temperatures are within about 2 degrees Celsius, even when temperatures are rising and falling by 15 to 20 degrees Celsius in a matter of a few hours. EM: How do you get data off the temperature sensors?

BH: Typically, we base the robomussels on a commercial logger produced by the Onset Computer Corporation. Those loggers communicate using two LEDS that rapidly flash as the means of communicating the data. We modify the Onset data shuttles so that they can be fit over the curved surface of the robomussels.

EM: Is there other fieldwork that accompanies temperature data collection?

BH: The robomussel data are, as you suggest, only part of a much larger picture. As part of the metadata that we use to describe the temperature data, we use a high-resolution Trimble RTK (Real Time Kinematic) system to measure the elevations of the microsites where we place our loggers. We also deploy pressure sensors to measure tidal elevations which help us to understand when the mussels are in air and when they are underwater. And, we also use the data from the temperature loggers to validate computer models that we have created which allow us to forecast mussel temperatures using data from satellites and from weather stations.

EM: What are some key findings you’ve made?

This means many organisms are likely living much closer to their lethal limits than we previously thought. It also means that when we take a “nonhuman eye view” of nature, we see patterns that are otherwise foreign to us. For example, we often just look at the extremes of a species distribution that are closest to the equator, assuming that this is where they will be hottest. Our results suggest that local conditions can be so important that they can overwhelm these latitudinal trends. Instead of “latitudinal gradients,” we instead see what we are calling “mosaics” that are far more complex.

Our latest efforts have combined the field measurements with physiological models to further look at current and future patterns of growth and survival, again in aquacultured mussels (Montalto et al. 2016). EM: You’ve recently brought together much of your observations. What do you think the larger dataset could reveal?

BH: We have analyzed portions of the robomussel data to answer specific questions, but this is the first time that data from all of the sites have been assembled into a single database, and we have yet to look at patterns in aggregate. In a 2002 Science paper, we measured patterns in extreme temperature at a series of sites along the West Coast of the U.S. and showed that, in these intertidal sites, the typical assumption of “conditions get more extreme the closer one gets to the equator” does not hold. Instead, the influence of local environmental conditions, such as the time that low tide typically occurs in summer and the amount of cloud cover and wind speed, are so important that they completely overwhelm the idea of a “latitudinal gradient” in stress. Since the release of that paper, similar patterns have been shown for various organisms at
sites around the world both by our team and by others.

EM: How else are your data being used?

BH: Many other groups are beginning to use this data set, which in part is what prompted us to make it public so that others could as well. For example, a recent paper led by Kristy Kroeker, assistant professor of ecology and evolutionary biology at University of California – Santa Cruz, found mosaic geographic patterns not just in temperature (from our data) but also in ocean pH and food, and found that mussel growth was lowest where conditions of high temperature, low food and low pH coincided.

A group that we work with in Palermo, Italy has used the models (validated with the loggers) to help inform shellfish aquaculture. We are working with faculty in China to determine how the building of massive seawalls may facilitate the spread of invasive species, and we are also working with another group in Israel to ask how the complexity of the shoreline may enhance resilience to heat waves.

EM: What are your plans for the future?

BH: The only thing I would add is that despite what we often hear in the mainstream media, the question of whether climate change is occurring, and whether it is impacting ecosystems, has long been settled in the scientific community. We are now looking forward to asking where, when and with what magnitude are changes most and least likely to occur, and what can we do to prevent damage? Data collection and instrumentation at small scales is going to play a vital role in this endeavor, and I see many opportunities between ecologists and engineers as we attempt to dream up novel ways of adapting to climate change.